Anthony Griffin is not known as a great conversationalist.

So imagine the chat when the Penrith coach told his Fijian wrecking ball that he was about to be promoted to the starting team for the first time in the NRL.

It was leading up to the clash against the North Queensland Cowboys in round four. 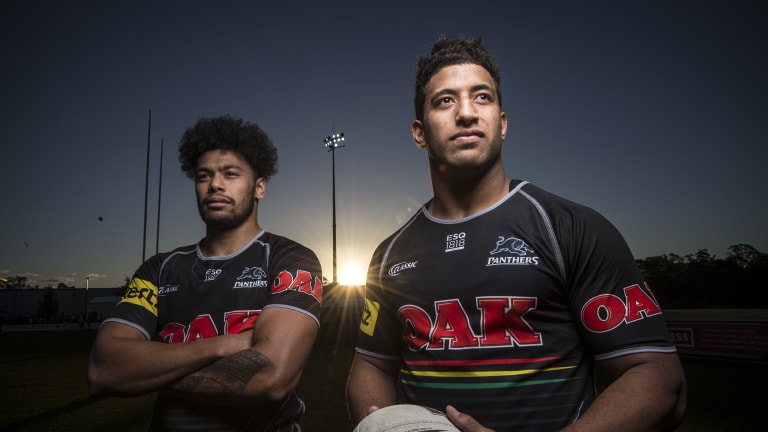 "Hook [Griffin] usually calls you into his office for a talk, but this time he didn't,'' Kikau says. "I was in the strapping room. He walked in and said, 'Billy, you're starting this weekend'.

"Then he walked out. That was it.

"My goal this year was to be in the 17 each week. I thought if I worked hard and could make the bench, that would do me this year.

"To be now starting each week, I've taken it with both hands.''

The only thing better than Kikau in full flight is his combination with countryman Waqa Blake.

The "Fijian beauty and the beast" have formed a wonderful relationship on Penrith's left edge. 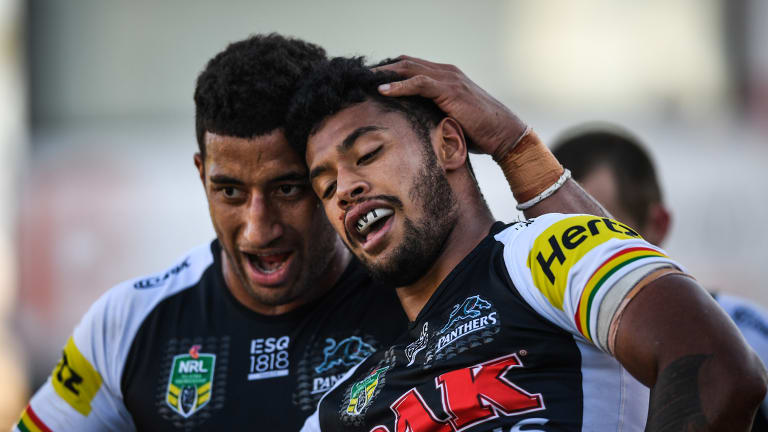 Happy days: Waqa Blake (right) and
Viliame Kikau celebrate a try against Parramatta in round one.

Canberra will know all about it when they try to stop the pair at the foot of the mountains on Sunday afternoon. A few Raiders are entitled to ask Ricky Stuart for danger money.

Manly players will still be haunted by Blake and Kikau after they played starring roles in last Saturday's great escape at Brookvale. In case you missed it, Penrith posted four tries in seven minutes to sink the Sea Eagles.

Blake scored a try and set up another, while Kikau somehow forced the ball free from Tom Trbojevic for Nathan Cleary to score the match-winner.

When Fairfax Media arrived at Penrith on a foggy morning this week, Blake and Kikau were still unsure which of them the "beauty" and who was the "beast".

"I'm glad to be playing alongside one of my countrymen. I always tell him if I get early ball, nine times out of 10 I'll get a hand free for an offload, and he just needs to push up. 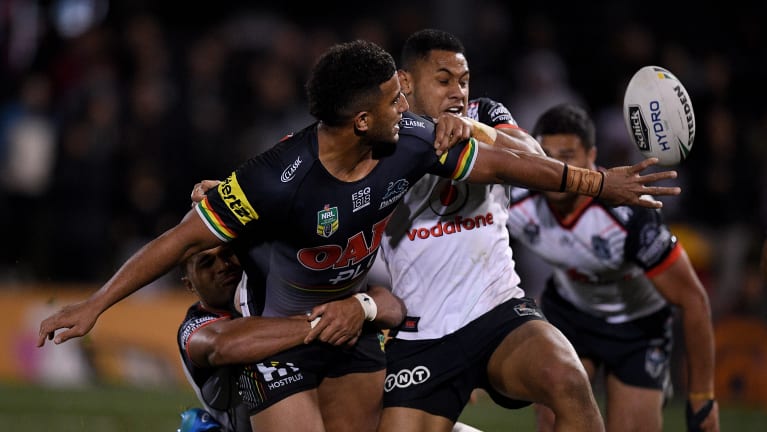 “Nine times out of 10 I’ll get a hand free for an offload”: Viliame Kikau proves his point against the Warriors.

"He's a stirrer and he can get under your skin. But he's also laid-back, never gets angry, you just need to give him early ball and let him do his thing.''

Kikau has created such a stir this year that some were prepared compare him to the great Sonny Bill Williams.

It prompted Panthers supremo Phil Gould to tell Fairfax Media at the time: "He's not the next SBW, he's the first Viliame Kikau.''

Gould's trusty offsider, Jimmy Jones, says fans have only seen about 50 per cent of what Kikau is capable of.

It's easy to forget Kikau played only nine games last season and averaged just as many minutes.

"If somebody told me I'd have played every round by now, I would have said they were mad,'' Kikau says.

The youngest of seven children, Kikau did not know one of rugby league's rules when the North Queensland Cowboys came knocking. He left the tiny island of Bau and quickly made an impression in the Aussie tropics.

The Cowboys were filthy when Gould snuck under their guard and lured him to Sydney's west. Parramatta and Melbourne were among the other clubs chasing him.

Gould upped the ante again last month when he extended Kikau's deal until the end of 2022.

The World Cup was a huge turning point for Kikau. He played every minute for the Bati and was even complimented by a few of the Aussies after he left an indelible mark on a few of them in the semi-final.

Blake would have been there with Kikau had it not been for end-of-season shoulder surgery.

Blake is one of the best movers in the game. Aussie sprinter Matt Shirvington suggested earlier this year Blake had a flawless running action. No Panther can catch him over 100 metres.

If it was not for a high ankle sprain earlier in the season, Blake, who hails from the north-western Fijian city of Lautoka, could have been a bolter for a NSW Blues spot.

Penrith playmaker James Maloney, who plays on the same edge as Blake and Kikau, said: "They're very funny guys. It's a really good combination. Billy cruises around like he doesn't know what's going on, but he's a bit smarter than what he lets on.

"You can feel the wind [of Kikau running off your shoulder] – you nearly get blown over when he runs past.''

Dallin Watene-Zelezniak has a simple approach.

"I think you've just got to give them the ball and everyone run," he says. "You have to back them up because something is going to happen.

"Waqa is perfect for that. Everyone knows how fast Waqa is and having those two big units is pretty cool to have in the team.''

Blake believes the Panthers have the firepower to go all the way this year. Unlike the two past seasons, Penrith are not leaving their run until late.

Beauty and the beast will have a huge impact. No Bula.