Having banished a 12-year finals "hoodoo", Melbourne co-captain Nathan Jones believes the Demons can mount a deep September run, declaring there is no "end" for what his team is capable of.

The Demons have locked in a September date for the first time since 2006, having upset West Coast by 17 points in Perth on Sunday, leaving them in seventh spot and boasting strong percentage with a round remaining. Should they defeat Greater Western Sydney at the MCG on Sunday and other results go their way, they could yet finish fourth and have the double chance.

Jones is the only Demon remaining from their 2006 campaign, when they beat St Kilda and lost to Fremantle – those matches being the seventh and eighth games of Jones' then fledgling career. He has now notched 260 games, having endured years of frustration, upheaval and turmoil since that last campaign under coach Neale Daniher.

Simon Goodwin, now in charge, said the Demons had slayed 12 years of "misery" with their finals-clinching victory in Perth, while Jones opened up about the weight of expectation he – and others – had carried.

"It's hard not to, at times, feel the weight of expectation, whether that be the public, our supporter group, even yourself, really. To sort of shed that, just stay focused on what we are trying to, that's probably been the most difficult," Jones said.

"At times, particularly guys that have been around a while, me in particular, I have felt 12 years of expectation. That's difficult to deal with. What that does now is just create a new dawn – it's huge for the group, huge for the footy club. It [the finals drought] is a hoodoo or a hurdle that we have got over. Now you move forward and give yourself an opportunity.

"If we play our best footy, I don't see an end to where this team can get to, whether be that be in season 2018. But the fact that [the hoodoo] is done now and we have given ourselves an opportunity to move through that, I am bloody proud of that. Hopefully, that's the monkey off the back." 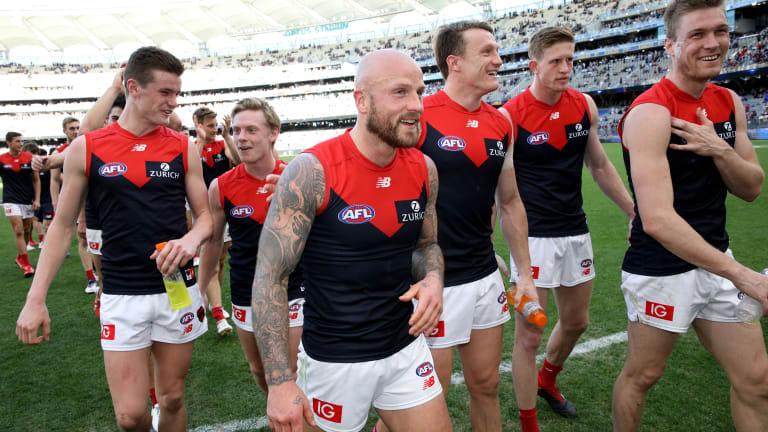 Nathan Jones leads his Demons off the field after their finals-clinching win on Sunday.

Jones wants the Demons to "relish the opportunity and moments" which await, with their immediate focus facing the stung Giants.

The Demons, chasing their first flag since 1964, will monitor rebounding defender Michael Hibberd (corked hamstring), understanding that he would also have the pre-finals bye to rest the injury.

Co-captain Jack Viney was in Perth with the team, and he insisted on Monday he would return for the first final. The robust midfielder has played only seven games this season because of foot problems, having not played since round 16.

The Demons were upbeat but tired on Monday, a two-hour overnight plane delay providing more time to enjoy the win as a group but impacting on sleep.

Forward Jake Melksham, the former Bomber who played his lone final in 2011, said the Demons were determined to have a fruitful September campaign.

"I remember coming to the club three years ago – the place has changed quite a lot. Everyone has put in a heap of work and now we are starting to get some of those rewards," he said.

"A finals berth is a good reward for that but it's only just the beginning of where we want to get to … the weight of expectation has been on our shoulders, even though it hasn't really had much to do with us as a young group."

Melksham said the reconfigured forward line without Jesse Hogan, who will miss the rest of the season, had worked well. Tall forward Sam Weideman, having played the last of his five matches this year in round 15, returned against the Eagles, and kicked a goal.

Speaking on the Demons' website, Jones said suggestions his team had been "mentally weak" had been frustrating, these coming because of the struggles against top-eight opponents. The Demons squandered a 27-point lead against the Eagles to trail by a point at the 18-minute mark of the final but held their nerve and rebounded.

If they can continue to win contested ball and clearances, as they did against the Eagles, a deep September run could await.

"Even now, I am probably learning more now in the last year or two of playing, finding ourselves in those positions, how I can influence as a leader or a player. Those learnings shone through more than ever [against West Coast] and that's what I am so proud of," Jones said.