The man most likely to fill Israel Folau's shoes in the second Bledisloe Cup Test this weekend says turnovers and the team's inability to move on from its mistakes cost the Wallabies at ANZ Stadium on Saturday night. 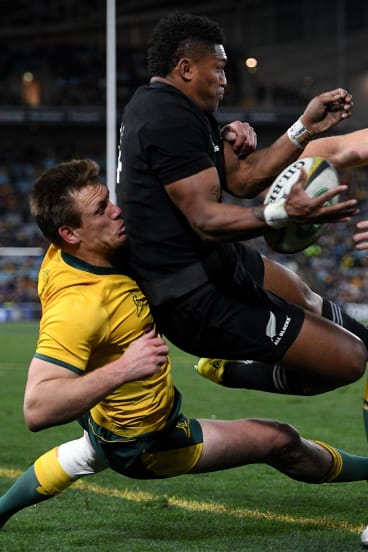 Dane Haylett-Petty said the Wallabies had completed a sobering review of their 38-13 capitulation to the All Blacks after arriving on Waiheke Island on Sunday evening.

The fullback-cum-winger, who will vie with Kurtley Beale for the No.15 jersey after Folau was ruled out with an ankle muscle tear, said Australia's defence held up well until it started turning over ball.

"When you look at the structured and unstructured defence we were actually really good, but we got killed on turnovers, four or five tries," he said.

"It was the main area of the game where we let ourselves down. Against other teams they're probably not going to capitalise on all those opportunities, but the All Blacks definitely do and we can't afford to open the door and give them those opportunities."

Hayletty-Petty said he had no idea who would be Folau's replacement at Eden Park this Saturday, but with a surplus of qualified candidates Cheika would have a few choices.

"One thing we do have is more fullbacks than wingers," he said. "Jack Maddocks played well when he came on on the weekend, Kurtley's played there quite a lot, Reece Hodge, Tom Banks. There's a lot of options there for Cheik, we'll have to wait and see." 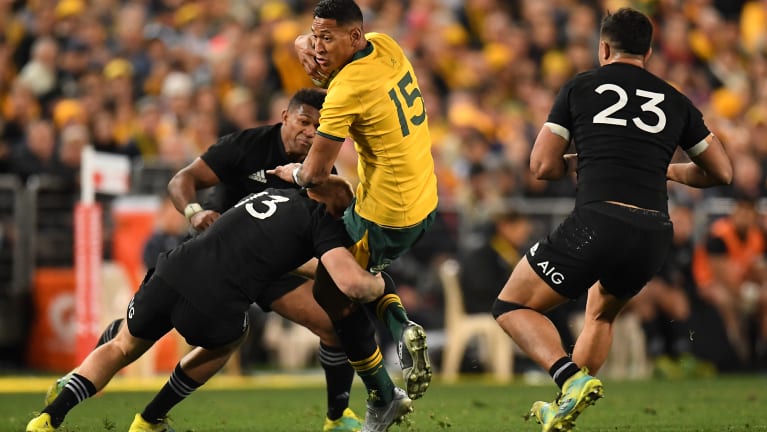 Casualty: Israel Folau is tackled by Jack Goodhue before the fullback left the field with an injury.

Haylett-Petty has never started at fullback for Australia and Beale started there on every match of the spring tour last year. But neither Folau nor Haylett-Petty were available at the time; the former was enjoying his honeymoon and some down time while the latter was nursing an arm injury.

Given Beale's key playmaking role in the Wallabies' attack, Cheika may be reluctant to move him out of the front line.

Haylett-Petty is a well-rounded fullback, with a kicking game and solid defence. He may be a more attractive option than starting one-Test Maddocks or the uncapped Banks at Eden Park.

The Rebels No.15 said he was ready for the opportunity if it came his way.

"Definitely, that's here I play all my Super Rugby, that's where I've played most of my career. I'd love the opportunity but we'll have to wait and see," he said.