Home » Sport » 'Forget me, it's about the club': Ferguson unfazed by title farewell 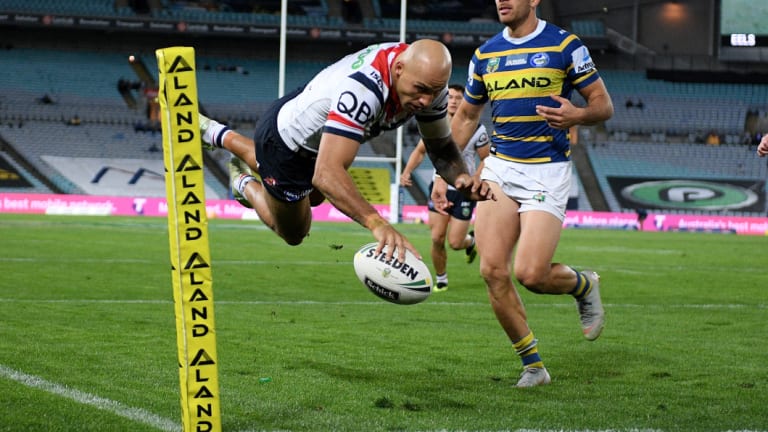 There are plenty of things to like about the minor premiers, who finished with the JJ Giltinan Shield for the fourth time in the last six years under Trent Robinson. But nothing sums up their attitude to September quite like their flying winger, who has charged off the back fence all season.

In his own words, he's "28 now and not 21". He doesn't play for Cronulla anymore, a club he walked out on in 2010 and as he pushed through the door said "I want to win a premiership". They've won a premiership since, Ferguson hasn't.

They'll be doing their best to ensure it stays the same way when the Sydney rivals clash at Allianz Stadium on Saturday night.

"Maybe my mentality has changed a little bit," Ferguson said. "People mature, people grow up and I'm just looking forward to the game on the weekend."

They talk about the influence of Cooper Cronk and James Tedesco, but perhaps one of the Roosters' biggest weapons this season has been the lanky right winger who has churned through an enormous amount of yardage.

Is there a more dangerous back-three combination in the NRL than Ferguson, Tedesco and Daniel Tupou carrying the ball out of their own end?

What he will look forward to seeing this week is what unfolds on the other side of the field. The Roosters' strike weapon Latrell Mitchell will match up against Josh Dugan, whose friendship with Ferguson needs no introduction. It might be worth the price of admission alone.

"I think it will be a good battle to watch and if I wasn't playing in the game I would be looking forward to watching that," Ferguson said. "They're both world class players. It will be an intriguing battle and if I was in the audience I would be loving that battle."