Australian tennis battler John Millman has struck grand slam gold, booking a dream US Open date with Roger Federer and banking a cheque for $370,000 to boot.

"I will definitely go to the prizemoney desk and collect my cheque. That's for sure," Millman said after his life-changing 6-4, 4-6, 6-1, 6-3 third-round triumph over Mikhail Kukushkin at Flushing Meadows.

But Millman doesn't play for the money. 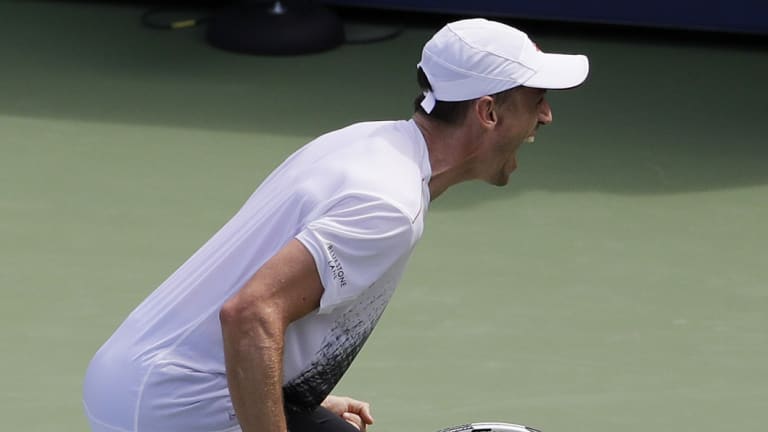 John Millman celebrates making it to the second week of the US Open.

The 29-year-old plays for love and now he's reaping the rewards.

In addition to his first-time appearance in a grand slam second week, Millman will also crack the world's top 50 for the first time and earn a coveted place on Lleyton Hewitt's Davis Cup team for Australia's historic tie against Austria this month.

"If I had played tennis for the money, I would have quit a long, long time ago because I have come from the scraps just about on the tour," he said.

"For me, it was more about being able to create that opportunity to put myself in a position where I am playing second week of a grand slam. That is very special."

It wasn't so long ago that Millman feared his injury-plagued career was over.

"I've had three surgeries in my career, two shoulders and the last one a groin, and every time I've had extreme doubts if would get back," he said.

"But I have a great team around me that pick me up when I feel sorry for myself. Without them, I wouldn't have this opportunity."

And what an opportunity it is: the great Federer on tennis' biggest stage after the Swiss denied Nick Kyrgios an all-Australian showdown with Millman with a 6-4 6-1 7-5 dispatch of the Canberran in a vintage display.

Millman spent several days training with Federer at the 20-time grand slam winner's Swiss base before Wimbledon and says he won't be overawed.

"I've got a lot of respect for Roger. He's got an aura about him. Definitely a player I've looked up to throughout my career," MIllman said.

"But have never been a fan of playing anyone's reputation. When you go out on court, I think it's about engaging in a battle.

"I definitely won't be thinking about those things. I want to start off at love-all and not already being behind the eight ball and playing someone's reputation.

"If you do that, I think you can get bogged down and you're in a bit of trouble.

"I will relish the opportunity."