Suspended West Coast star Andrew Gaff will soon meet with Andrew Brayshaw in an attempt to make peace with the injured Fremantle player.

Gaff on Tuesday night was suspended for eight matches for striking Brayshaw with a blow which broke the Docker youngster's jaw.

Mark Brayshaw says the meeting will be facilitated by his son Hamish, who is a close friend of Gaff's and a West Coast teammate.

"Thankfully Hamish is in a position to connect the two Andrews hopefully in the next day or two … and the two of them can shake hands and move on," Mark Brayshaw told SEN radio on Wednesday.

"It can potentially get nasty but I'm really hopeful it won't."

Gaff has publicly apologised to Andrew Brayshaw and Mark Brayshaw said he had also received an apology from Gaff's father.

"He and his wife were upset and embarrassed and apologetic -and it's just a horrible thing to be in," Mark Brayshaw said. 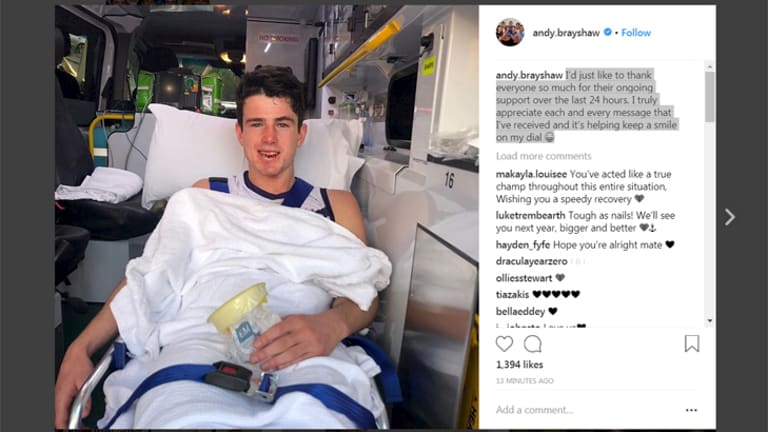 Andrew Brayshaw posted on Instagram thanking fans for their concern.

Brayshaw senior said he told Gaff's father: "We accept your apology, please don't, in amongst all your considerations, don't worry about us".

Mark Brayshaw, who maintains the AFL should examine introducing a send-off system, said he saw the incident in Sunday's derby between the Perth clubs.

"I started to watch young Andrew Gaff and he looked horrible out there and I thought 'oh God … I knew that the narrative would change'.

"It was just nasty and horrible and and I found myself thinking 'here's a young bloke who has made a blue'."

Mark Brayshaw said he was driven home from the game by his son Hamish and they analysed footage of the incident.

"You can actually see my Andrew spread his legs a little bit and lower his centre of gravity," he said.

"And Hamish said to me, it's Andrew Gaff, it's one of his best mates and the most delightful bloke you have ever met.

"And thought to myself, my Andrew has inadvertently lowered his centre of gravity here and a chest punch has become a face punch.

"So when I spoke to his dad I said 'look mate, these things happen'."