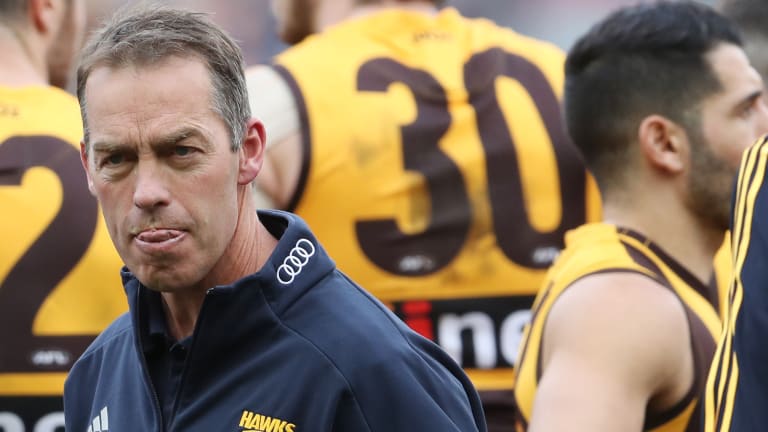 They are circling like a hungry shark spreading fear among rivals but Alastair Clarkson insists Hawthorn are keeping their premiership aspirations in "perspective" ahead of an intriguing finals campaign.

The Hawks have been hard to read through the season, at times appearing to be a rebuilding side likely to miss September for a successive season, before rebounding to be top-four bound and firmly in the mix for what the coach refers to as "the next piece of silverware".

The upper echelon of the ladder is just where they sit heading into Saturday night's clash against St Kilda, and appear likely to finish with two matches remaining in the home-and-away campaign.

Hard-fought victories over finals contenders Essendon and Geelong in the past fortnight have fortified the Hawks' belief but Clarkson insists he still does not really know where his team sits in terms of combating defending champion Richmond, an emerging West Coast and a surging Greater Western Sydney – the three teams above the Hawks on the ladder.

"That sounds a bit rude to say that because we have such a high regard for Geelong and Essendon, in particular, who've been playing really good footy. Four or five weeks ago we came up against a side in Brisbane who we couldn't get the better of, so we're yet to actually find out where we're really at.

"The last two weeks we have been really excited with what this group has been able to do in high pressure games that were like finals. Essendon really needed to win that game to keep their genuine finals hopes alive and Geelong were the same last week … but we are still to test ourselves against West Coast, Richmond, GWS … who sit above us on the ladder. We are hoping to get the chance to do that in the next three or four weeks."

What they have done in the past three weeks is become a defensive juggernaut, slashing the points they concede and opposition goals per inside 50. They have also improved in clearance differential and points difference from clearances. Recent wins have come despite the absence of the injured Jarryd Roughead (ankle) and James Sicily (wrist), while Cyril Rioli has retired.

Clarkson was delighted to have Ben McEvoy return against the Saints, the frontline ruckman having fractured his cheekbone in round 15. His return comes in a week Jon Ceglar strained a calf at training.

"(McEvoy) had a pretty serious facial injury, in terms of that clash in the Western Bulldogs game about six weeks ago, and had plates inserted into an eye socket on his cheek," Clarkson said.

"There are some cheekbones you can come back in one or two weeks, which is fortunate for some, but that wasn't Ben's case – his was a pretty serious knock. He's taken the full six weeks to recover from that, which is the normal time for a skeletal injury to recover and we're rapt."

"They're great mates and they both live with this family, the Kings, in Hawthorn and they're like a mum and dad to them and like an extended family," Clarkson said.

"Nashy's mum and dad were over for the last month and that culminated in him playing his first game, so that was a really exciting time for him, his family and for our football club.

"But to now have both boys playing in the one side is pretty exciting, too, given they're such good mates and from the same country."