Home » Sport » King of the north: Why Thurston's final year does no harm to his legacy

Up in Townsville, the Goat Track has become the GOAT Track. Until September 7, the popular Castle Hill walking path, which provides a panoramic view of His Kingdom, will be named after Johnathan Thurston.

It's a good and fitting gesture as the Cowboys great prepares to play his final game at home, a
Friday night scrap against the lowly Eels. The prize is more like the lack of a prize. Neither team wants the Wooden Spoon. Thurston, especially, doesn't deserve one as a retirement gift. 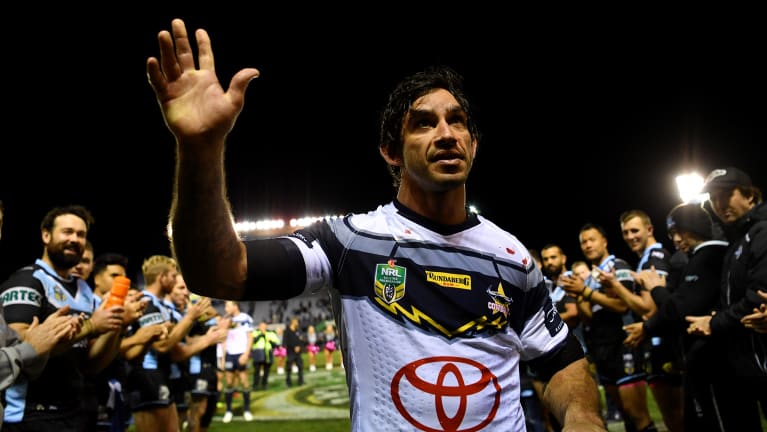 Last hurrah: The modern-day great will bid farewell to home fans in Townsville on Friday.

It's about 1300 steps to the top of Castle Hill, a journey best taken in the winter months unless you are trying to strip weight for an impending featherweight title fight. Thurston has probably been up there dozens of times for photos since he arrived in the Far North in 2005.

The charge he's had to face this season is that 2018 was one step too many, that in saddling up for one final rodeo, he's only served to dull a career that may well be without peer in the NRL era.

That's wrong, by the way. But it's worth going back to the beginning of the end, rather than the rapidly nearing end of the end, to remember why it all seemed perfectly logical for Thurston, now 35, to cast his spells for another season.

When the Cowboys made it into last year's grand final, it seemed like the heroics of a team that was on the verge of something special in 2018. They were walloped by the Storm in the decider but they had dramatically over-achieved to get there in the first place.

With Thurston, who missed the finals, returning without the burden of State of Origin football and Jordan McLean moving from one extreme to the other as he ventured from Melbourne to Townsville, it was easy to surmise that all the pieces were now in place.

Ahhh… the best-laid plans. Thurston's final year has been anything but the dream farewell. North Queensland enter round 24 with just six wins. They are last. If you predicted that, congratulations on your various lottery wins and Melbourne Cup first fours.

That hasn't made it an unworthy cause for Thurston by any stretch. Retiring after a serious injury was never going to be his style and his record of achievements is so long it would take a decade of horrendous football to even begin to eat into his legacy.

This hasn't been rugby league's version of Muhammad Ali fighting wrestlers in Yokohama because he couldn't accept the signs of his own decline. Thurston hasn't been great this season but that unrelenting desire to succeed hasn't departed. That has been at the heart of his legend, anyway.

It's been incremental and largely without bluster or excessive fanfare. Week by week, Sydney clubs have said goodbye in their own small way. On Friday, it will be the turn of those that view him in terms far beyond the prism of a professional playmaker.

Thurston has played some of his best football fuelled by raw emotion yet has managed to be restrained as the inevitable approaches. On Tuesday, he was busy making a bigger deal of Matt Scott's 250th than his own final appearance in Townsville.

"I'm just trying to savour all these moments I've got left. There's going to be a lot of emotions from outside the walls. Matty is going to be the first forward to play 250 games for the club, it's a massive milestone," Thurston said.

Expect that facade to disappear when he makes the rounds at his home ground late on Friday, then again the following week when he pulls on the signature indigenous-themed boots for one final time, against the Titans on the Gold Coast At least it's in Queensland.

Volumes will be written about Thurston between now and then; his toughness, his ability to overcome virtually any obstacle on a football field, his curveball conversions, his contributions off the field, his trademark dummy. The list goes on and on.

"While the results haven't gone our way, it's been a very humbling experience," Thurston said of his charitable treatment by rival clubs over the past few months.

It's been a frustrating one, too, if you are a Cowboys fan. More than anyone, Thurston has been infuriated as the season slipped away before his eyes. When the finals start, his career will be over, and that's difficult to compute.

That will all be forgotten on Friday night when a genuine hero in headgear appears at home for the final time. No player in the game means more to their respective fans. Even if 16 v 15 won't be epic, the send-off surely will.