Home » Sport » Latte set: Why it took time for Friend to click with new recruit Cronk

Jake Friend can not pinpoint the exact moment he sat down with Sydney Roosters coach Trent Robinson. But he knows the chat needed to happen and it ultimately turned his season around.

The Roosters are finally all the hype, and their past two powerhouse wins have featured huge games from their co-captain and No.9. 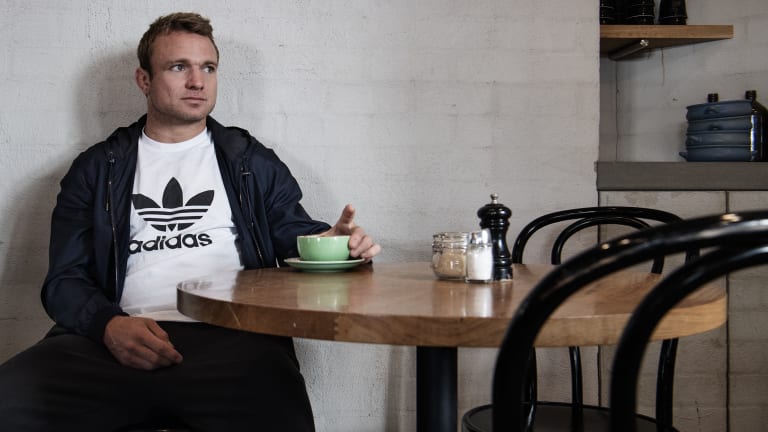 When Mitchell Pearce suddenly exited the Bondi club, no player felt it more than Friend.

Not only were they great mates, but Friend had virtually spent all of his first-grade career at hooker with Pearce at halfback. Suddenly he was expected to form an instant combination with $1 million No.7 Cooper Cronk and $1 million No.1 James Tedesco.

So after the sluggish start, boos from the Roosters faithful during a game against South Sydney – and even a subtle push for Victor Radley, a rookie back-rower, to start at dummy-half – Friend turned to Robinson. 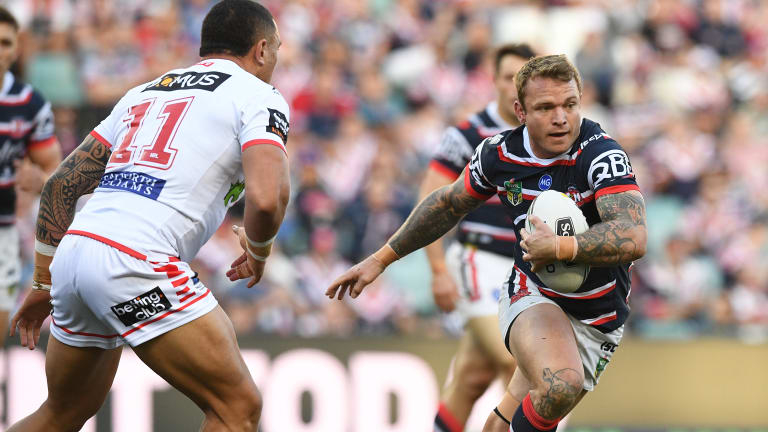 Livewire: Jake Friend sparks the Roosters’ attack against the Dragons at Allianz Stadium.

"And it was one of the best chats I could have had,'' Friend said on Wednesday. "I sat there and asked, 'What's my role with these new guys?', and 'Where do we want to get to as a team?'.

"The chat was during that clunky patch. It was more for myself. Robbo is a straight-shooter, he tells you what he thinks and the stuff he thinks you can work on.

"We did so much work together [with Cronk and Tedesco] in the pre-season, and it didn't click for me. We were winning, but personally I was disappointed with the way I was playing.

"That was the most frustrating thing. We had spent all this time together, I was doing what I was meant to do at training, on the field and away from training, but it just didn't click.

"I had only ever played with Mitch. I played with the one halfback my whole career. It was a fair change when Cooper came, along with a new fullback.

Friend said because of the Roosters rock-solid defence in the earlier rounds, they were given the luxury of playing around with different attacking plays.

There had been little change to their attacking structures since Robinson came on board for the triumphant 2013 season. 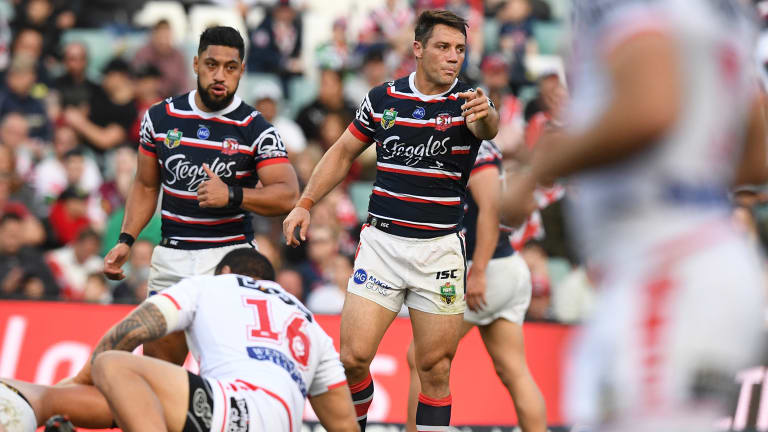 Changing of the guard: Jake Friend took some to time to adjust to Cooper Cronk taking the place of Mitchell Pearce at the Roosters.

Only now have the Roosters cherry-picked their best plays – and it's reflected on the scoreboard.

The Roosters put on 56 points against Manly and then 36 against top-four rivals St George Illawarra.

Johnathan Thurston and the North Queensland Cowboys can only hope the Roosters are not in a mood at Allianz Stadium on Saturday night.

The Roosters do lose Luke Keary in the halves, with Friend – and Cronk – pointing out that Keary's knee injury and a few weeks off will do wonders for his overall health.

Friend has been around the glamour club a long time and bleeds red, white and blue.

He has literally bought into into the eastern suburbs latte lifestyle and operates High St Society, a lovely cafe in Randwick, where we met for this interview.

He has earned a mountain of respect from his teammates.

Prop Jared Waerea-Hargreaves told Fairfax Media: "That guy has the thickest skin out of all the boys at the club.

"He turns up no matter what and we know what we'll get from our skipper. He's very resilient.

"He's also a little gremlin I like to call 'Harold'. He's got small-man syndrome.''

Cronk himself commented about Friend during the lean earlier months: "Jake Friend puts his head in places I wouldn't put my feet.''

Having become a part of Uncle Nick's furniture, Friend knows there's always a greater level of expectation with the Chooks than most other clubs.

Now 28, the chance to hoist the trophy with fellow skipper Boyd Cordner on grand final day remains the ultimate dream.

"You don't touch on that for a lot of the season, but we've worked hard to put ourselves in a position to have a good crack at it,'' Friend said. "That's the end goal and we're going after it.

"We want to improve on last week, and I think there's plenty of room to improve.''