Alex Fasolo is moving closer to the exit door at Collingwood, with arch rivals Carlton in the box seat to secure the dynamic forward’s services for next season and beyond.

The 26-year-old, who is a free agent, has played only one game this season with injury and form both factors.

The Age understands that Carlton has been in discussions with his management over a possible move to the Blues.

A deal for Fasolo is likely to be for three years for an approximate total of one million dollars, meaning the forward would be earning approximately the average annual AFL salary.

As a free agent, Collingwood would be compensated for Fasolo’s departure. The Magpies would likely receive a third round pick if he decide to leave the club.

The East Fremantle product has previously harboured ambitions to return to his home state, and while both West Australian clubs have been keeping any eye on him, it’s believed Fasolo would now prefer to stay in Victoria.

The enigmatic forward has endured a tumultuous last three years.

After winning Collingwood’s goal kicking award in 2016, he nearly went back-to-back the next season, although he was inaccurate in front of goal, kicking 29.29. 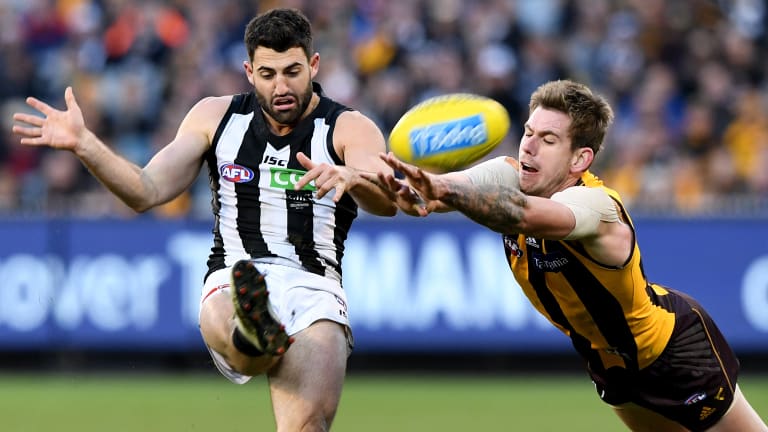 Fasolo is understood to be wanting a fresh start, and Carlton are interested.

He also took time out of the game last year while dealing with mental health issues.

Shoulder and ankle injuries thwarted any chance for Fasolo to get on the field consistently this year, although he is back playing at VFL level now.

Those close to Fasolo and some senior figures at the club believe the timing is right for him to leave Collingwood and start fresh somewhere else.

Although he’s been unlucky with injury, the Magpies new look forward line doesn’t seem to have room for him.

The mix of Mason Cox, Jordan De Goey, Josh Thomas, Will Hoskin-Elliott, first year sensation Jaidyn Stepenson and Travis Varcoe – with Brody Mihocek also in the mix – has seen Collingwood’s forward line appear at its most dynamic and unpredictable under Nathan Buckley.

That’s without mentioning the injured trio of Darcy Moore, Ben Reid and Jamie Elliott, although Moore and Reid have both been used in defence as well.

Elliott, who is also out of contract, is certain to attract interest from other clubs, but Collingwood would be reticent to trade a player of his talent.

Other clubs would also be unlikely to offer a trade to satisfy the Pies, given Elliott has played 17 games in the last three seasons, with zero games in 2016 and 2018.

For Carlton, Fasolo is the type of player that the Blues would love to have, particularly if it doesn’t cost them anything via a trade.

At age 26, he fits the perfect age profile, he kicks goals and is said to be a great clubman.

It’s set to be another significant off season for the Blues, who will once again be aggressive in their targeting of players.

Not only will Carlton be one of the most active clubs in October’s trade period, but – barring a miracle – they will also have the number one pick in November’s so called super draft, with Vic Country midfielder Sam Walsh believed to be the club’s highest ranked prospect.