Home » Sport » McEvoy back to business after The Everest

The life of a top jockey is lucrative but unrelenting. While Kerrin McEvoy did have time to celebrate his second Everest win on Redzel on Saturday night, he had to keep in mind that he will be riding lightweight Youngstar in the Caulfield Cup this coming weekend. 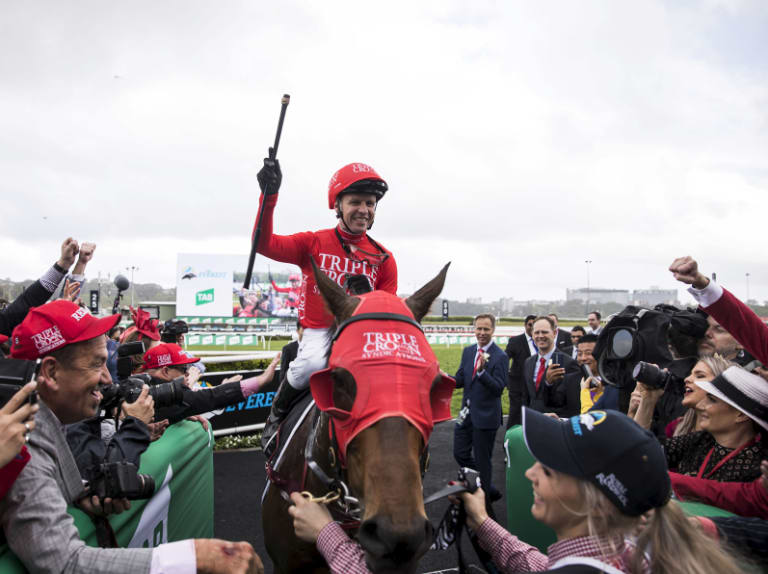 Mind on the job: Kerrin McEvoy raises his whip in victory after Saturday’s Everest on RedzelCredit:AAP

McEvoy is locked into the four-year-old. He won the Queensland Oaks with her in the winter and partnered her this spring for a win in the Shannon Stakes and a runner-up finish behind Winx in the Turnbull Stakes. That has made her a $6 second pick in Cup betting.

“She is a really good staying mare that is in good form and gets out to her trip in the Caulfield Cup,” McEvoy said. “She has got to handle Caulfield, that's the main thing. She will go there for a look on Tuesday.

“I’ll base myself in Melbourne this week to be on her in that gallop and then ride there on Wednesday and go to Werribee on Thursday. It is really straight back to business after The Everest because I have to ride her at 51.5kg. I have been keeping an eye on my weight for a while and just have a couple of kilos to go this week.”

McEvoy, who pocketed a $300,000 winning fee on Saturday, said Everest day was up with the best days in world racing after only two years.

It would help that he has been on the right side of the result twice with Redzel. Still, McEvoy was blown away by the atmosphere generated by more than 40,000 racegoers at Randwick.

“The crowd makes everything when it is like that. Your senses are heightened,” McEvoy said. "It is an amazing day. The build up is amazing. It is grand final week.

“It is unreal to be a two-time winner. The prizemoney alone doesn’t make the race. In just two years it has got a lot of prestige because everyone knows about it. Redzel would be the best sprinter I have ridden. He is just so genuine and turns up on the big day and gets the job done.”

Amazing to see full stands, and betting up

If you looked up at the old stand at Randwick on Saturday it was full before race four, which just goes to show how engaged the crowd was with the races.

While there was a party mood, which couldn’t be dampened by the misty coastal showers throughout the afternoon, the crowd was definitely still there to watch the races. Admittedly, the rain might have helped with that a bit, as people looked for cover.

The public area was once again dominated by under 35-year-olds, which opens the sport up to a new market. It is something Sydney racing hasn't had this century and hopefully it will help convert a few into more regular raceday fans.

The numbers away from the track were also impressive, with betting up nine percent on the TAB, while corporate bookmakers reported similar numbers.

Given the wet track, it is a remarkable result as a heavy surface can usually see turnover drop by up to 25 per cent.

“It was great to see significant growth of almost nine per cent again yesterday at the meeting after such impressive figures from the inaugural Everest, especially given the heavy track conditions at Randwick.

“As was the case last year, the success of The Everest flows across all racing with turnover on the huge Caulfield Guineas meeting also up considerably on last year.”

The Caulfield Guineas meeting was up just under 10 percent on the TAB, which is around the same mark as the trend for the year.

Tommy Berry and Godolphin were a couple of lengths from pulling off an Everest coup with Osborne Bulls as he flew down the outside fence for third on Saturday.

No horse had been out there all day but James Cummings and the Godolphin team are not afraid to think outside the box. They backed themselves in the biggest race of the year after walking the track.

The daring tactics were repeated as Esperance beat Revenire in the final event for the boys in blue.

Flindell started on Redzel in Sydney

Racecaller Darren Flindell has some good memories of calling Redzel in his two Everests but he has revealed that the champion sprinter was also the first winner he called when he took over the top job in Sydney.

Redzel was on debut on March 19 2015 when Flindell took the race-calling gig at Warwick Farm. He beat Japonisme, another who would go on to be a group 1 winner, in a hot two-year-old maiden that day.