Wallabies coach Michael Cheika has laughed off suggestions Australia would be favourites going into the first Bledisloe Cup Test in Sydney next week.

It's been a few days since New Zealand coach Steve Hansen made the unlikely assessment, via a squad announcement press release, that the Wallabies would be the bookies' favourites to win the first Test of the Rugby Championship. 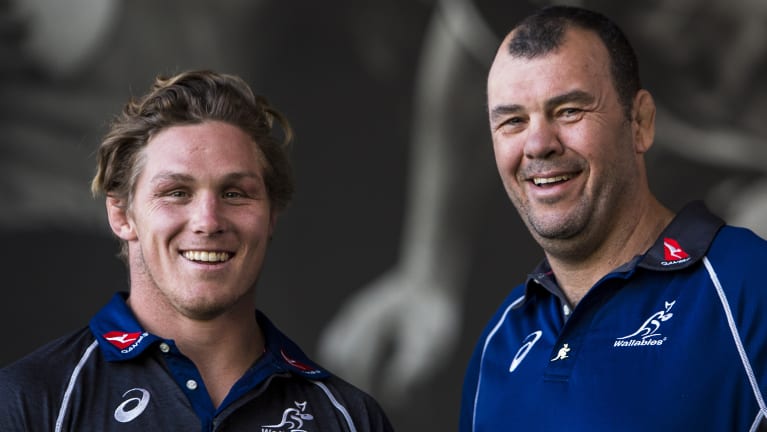 ‘I was a bit surprised’: Michael Cheika, right, responds to an audacious claim from New Zealand coach Steve Hansen.

Hansen's assistant, Ian Foster, was left to hose down the assertion later in the week but the missive didn't escape notice across the ditch in Australia. Cheika grinned widely when asked about it in Sydney on Friday.

"I was a little bit surprised," he said. "Hansen's a fine coach, he's obviously a great rugby mind, he's leading the team that's the best in the world, he's a great coach. But I think he may have had that one wrong because I don't think many of his players would believe it to be honest."

Hansen's goal was undoubtedly to guard against complacency in his own squad. The scars of last October's loss to Australia in Brisbane are not wholly healed and judging by his comments to journalists the All Blacks coach wants to make sure his players do not take lightly the challenge in Sydney.

"They beat us last time so I’d say they closed the gap," Hansen said on Tuesday when asked how the two teams measured up.

"They’re a good team and [Rugby Australia] made a wise decision in coming back to four teams in Super Rugby. They’ve created depth and that depth has created the need to work harder to get selected. They’re a smart side … and Australians being Australians they’re very confident people. You allow people to be confident when you’re playing footy and they’re going to take it away from you."

Cheika was finalising his squad make-up on Friday night before announcing the 28-man list on Sunday. There is little room for indecision. Outside a match-day 23 the Wallabies will only carry an extra hooker, prop and halfback, plus another back and forward.

"I want to have a bit more focus on the group that's going to play the game and I want the guys not playing in that given week to go and play some footy, whether it be club or NRC," Cheika said.

"I just think that little bit of extra focus on a smaller group of players in there can build our alignment and cohesion. Everyone is focused on the one task and everyone knows what their role is."

The Wallabies showed against Ireland that they have the capacity this year to start well against the All Blacks. Cheika said belief, focus and humility were the cornerstones of Australia's preparation for this series.

"Full focus when you get out there, work hard, all those things many people consider cliches but it's real time," he said.

"There's no magic formula. It's about belief, hard work, stay humble, focus and that will bring the energy on game night that our players need to bring together to do what's necessary to get the job done."