The Panthers are prepared to have wrecking ball Viliame Kikau travel to New Zealand later than his teammates as they desperately try to sort a visa wrangle on the eve of a crucial clash against the Warriors.

Penrith were scrambling on Monday night to ensure their Fijian cult hero would be allowed to return to Australia despite having a visa which makes it difficult for re-entry into the country. 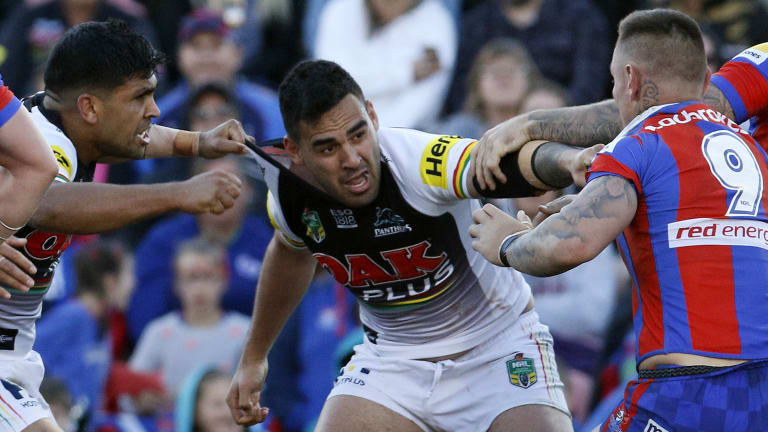 Viliame Kikau fronts up to Daniel Levi and Shaun Kenny-Dowall of the Knights as a brawl erupts at Panthers Stadium.

Attempts at finalising permanent residency have so far been unsuccessful.

The Panthers have been aware of the impending difficulty for weeks and haven't been able to get assurances from relevant government officials to date Kikau would be able to travel with the rest of the squad back to Australia.

The Panthers are due to play the Storm in Melbourne in the final round.

Coach Cameron Ciraldo has discussed with Panthers powerbrokers the possibility of Kikau leaving for New Zealand after his teammates if the paperwork can't be sorted until later in the week. Penrith were hopeful of more clarity about the situation on Tuesday.

Kikau, who has formed a lethal left edge combination with compatriot Waqa Blake this year, is expected to still be named in Penrith's 21-man squad and has been one of the top four contenders' most destructive weapons this year.

The Panthers dropped out of the top four with an upset loss against Newcastle, in which Kikau was one of four players sent to the sin bin for a melee in the dying minutes. They need to beat the Warriors to stay in the hunt for a top four finish.