Jarryd Hayne has started to hit his straps for the Eels, scoring nine tries in his past eight games, including a hat-trick against St George Illawarra. While no contract has been tabled to him for next season, Arthur made it clear he wants the Parramatta poster boy to play on. 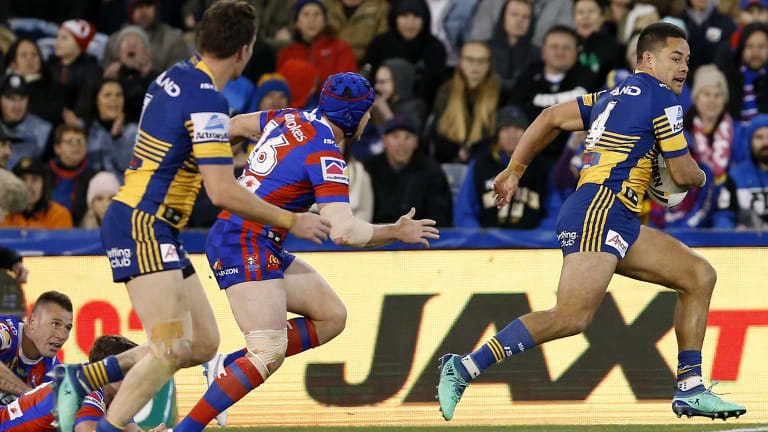 Drawcard: Jarryd Hayne has returned to somewhere near his best.

‘‘Jarryd knows we want him to stay, and if he stays in the NRL, he wants to stay with us,’’ Arthur said. ‘‘He’s returning to good match fitness. His eight games since he’s come back, if he doesn’t play against Cowboys [in round 14], maybe we don’t win that game. He’s been good ever since. He might not have been our best player every week, but he’s been in our top couple, and he’s had some really nice touches in a lot of those games.

‘‘His last month has been really consistent with his work rate, he’s been busy and he’s been in the game. He’s also got a lot of experience and he’s a leader – he’s one of the more natural leaders we have.’’

Hayne walked away from a $1.2 million contract at the Gold Coast to play with his first club for $500,000 this year. Eels fans will be wondering how much their club is prepared to pay the 31-year-old next season, especially given he has spent the past few games on the wing, where he has been named to play against the Storm tomorrow night.

Sydney Roosters winger Blake Ferguson makes more metres than any other player in the NRL and will head west next season on around $500,000 a season.

While Hayne started sluggishly, then suffered injury, he has steadily worked his way back into form.
Hayne has made a point of quickly shutting down conversations about his future, but Arthur was happy to show his hand publicly with three rounds remaining.

Despite the Eels stringing together back-to-back wins against the Titans and Dragons, they remain locked in a five-way battle for the wooden spoon. They face the Storm in Melbourne then back up the following Friday in the far north against the Cowboys in what will double as Johnathan Thurston’s Townsville farewell.

Rookie rake Reed Mahoney who was in primary school when Hayne inspired the Eels blue and golden run to the 2009 grand final, said he would love for his star teammate to stay. ‘‘Just his attitude on the field, he puts in and does some miracle things. He brings everyone together,’’ Mahoney said.

Meanwhile, Robbie Farah and Benji Marshall are no closer to making calls on next year after a meeting yesterday at the Wests Tigers, who are expected to play in front of a crowd north of 17,000 fans at Fortress Leichhardt on Saturday against St George Illawarra.