Sam Burgess will undergo scans on Friday after he felt ''a quick flush down the middle of the hammy'' during South Sydney's 51-10 win over the Wests Tigers.

The powerhouse Pom came from the field in the 54th minute and did not return to the sidelines. 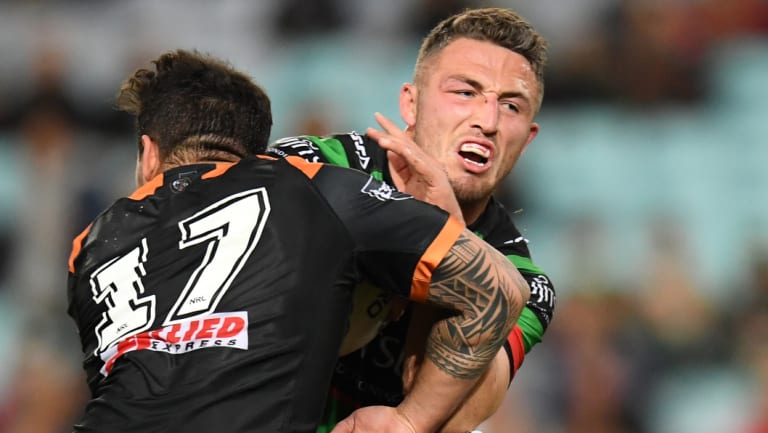 Warrior: Sam Burgess is tackled by Josh Aloiai of the Tigers during their clash on Thursday night.

It was reported during the TV broadcast Burgess had suffered a hamstring strain, only for coach Anthony Seibold to claim that message had not been relayed to him.

Seibold said the plan was to give Burgess a lengthy rest late in the game.

Burgess, who is not expected to miss week one of the finals, said: "The hamstring has pulled up pretty good, it was just precautionary, and I felt a little 'pop'.

"I think it's more neural than anything. It's nothing too stressful.

"We'll check it out Friday in a scan and see what's going on, but it feels pretty good and I'm not too worried about it.

"I felt a quick flush down the middle of the hammy. I've never had too many hamstring problems.

"I reckon I could have gone back out.''

Burgess was one of 10 Rabbitohs to run for more than 100 metres. It was the perfect hit-out for Souths, who came into the final-round Tigers clash on the back of three straight losses.

Russell Crowe was at ANZ Stadium and would have left confident his side will push deep into September.

If Souths are to make it all the way to grand final day, they will need Burgess on the paddock.

Apart from the hamstring scare, Burgess underwent elbow surgery two weeks ago, as reported by Fairfax Media, and backed up against Canberra eight days later. Normal recovery time for such a surgery was up to six weeks. 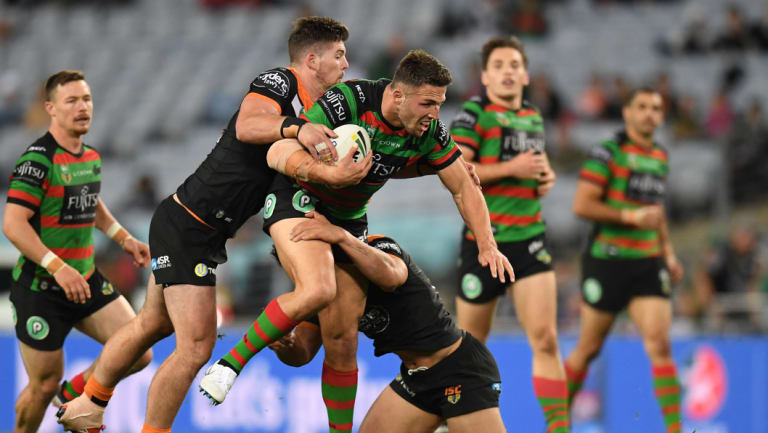 Metres gained: Burgess expects to play in next week’s final.

Seibold said of Burgess: "I don't think we needed Sam to go back on because of the scoreline.

"I love coaching Sam, he's very physical in what he does, along with Greg [Inglis] and 'Sutto' [John Sutton].

"I'm not aware of [a hamstring strain] and I didn't have that reported from the doctor.''

Souths will have a few extra days' recovery because of the Thursday night game and a 48-hour advantage over bitter rivals the Sydney Roosters should they meet as expected next weekend.

Souths can finish as high as second or as low as fourth, with a guaranteed double life during the finals.