It is not quite in the same category as Craig Bellamy's ''holier-than-thou'' rant directed at Cronulla, but South Sydney coach Anthony Seibold has been happy to give the Sydney Roosters a subtle back-hander – for a third straight time.

Moments after Souths lost to the Roosters 18-14 back in round 22, Seibold made a point of saying the Roosters ''struggled to handle us through the middle of the park''.

"And if we get another opportunity to play them again, we'll build some pressure and see if they can handle us,'' he said at the time. 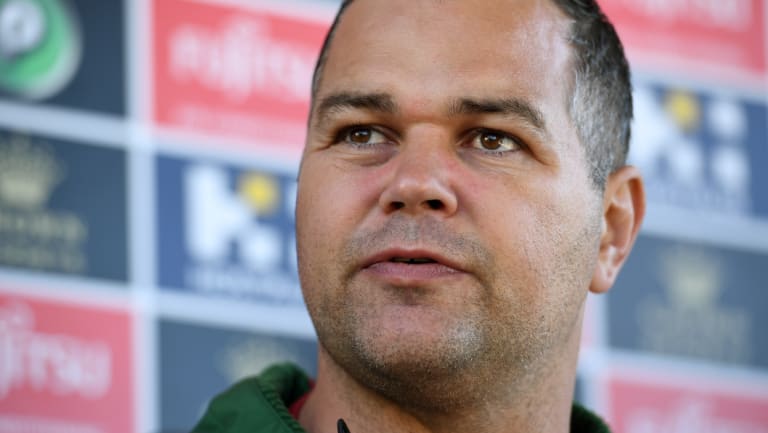 Last Saturday night when asked about the blockbuster preliminary final, Seibold was at it again. "They're the minor premiers, they've been in four of the last six preliminary finals, there is a fair bit of pressure on them,'' he said.

Yesterday, Seibold told the Herald he stood by his comments and said the pressure was right on the boys wearing red, white and blue.

"I'm just saying from the minute a ball was kicked, they've pretty much been everyone's favourites to be in the grand final,'' Seibold said. "They're the minor premiers and they've now added [James] Tedesco and Cooper Cronk to their group. They've lost three preliminary finals.

"Cooper is so composed getting the team around the field, he does it so well for the Roosters and has done it for Melbourne and the representative teams. And Tedesco is averaging in recent games almost 200m – him, Blake Ferguson and Daniel Tupou are in the top ten for metre-makers in the entire comp. 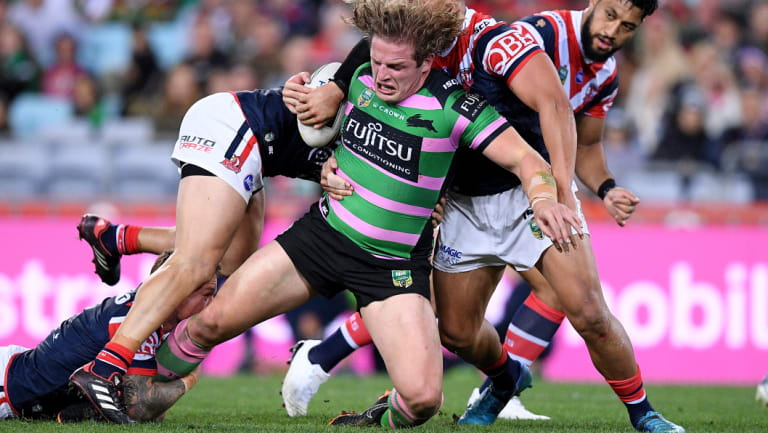 Skirmish: The Roosters won the last meeting between the sides, but Seibold insisted the Tricolours struggled to contain Souths’ big men through the middle.

"We've finished 12th the past two years and the only new person to our group is Dane Gagai. We'll go there and give a good account of ourselves.

"You get what you deserve. From November 1 we've worked really hard and diligently and we're the only team in the top four to have beaten the three other teams still standing.

Storm coach Bellamy unloaded on rivals Cronulla at his pre-match conference on Thursday, and while Seibold's claims were much more measured, they were a rare public dig from the first-year head coach.

Seibold is in many ways is similar to Roosters opposite Trent Robinson, who enjoyed premiership success in his first season in the NRL five years ago after a lengthy apprenticeship locally and abroad.

The 43-year-old is a student of the game and life. But no lessons could have prepared him for the two different moments he says his ''eyes were opened'' this season.

"One was the speculation about me and my coaching career,'' said Seibold, who was heavily linked to Wayne Bennett's post at the Broncos.

"And the second one was handling the accusations currently under investigation. There has been a lot of media around it. I've felt as thought I've handled it professionally and competently.

"You learn to trust certain people and you can't trust other people. You're always learning. It's my job to stay focused, protect the team and players and make sure I'm doing things with integrity.''

Sam Burgess will play against the Roosters after all Souths players were cleared by an independent investigation into a lewd video chat on Friday.

Seibold has complete respect for Burgess and never doubted he would perform against the Dragons.

All three Burgess boys will play a huge role in trying to steamroll the Roosters up the middle.

One player who will not run out for Souths on Saturday night is ten-year clubman Jason Clark, who rolled his ankle at training. Clark will be replaced by Junior Tatola.

Clark is bound for England next year and hopes his mates can win and advance to the grand final to give him a proper farewell.