Home » Sport » The Cup was only the beginning: brace yourself for more invaders

Australian owners and trainers have just about got used to seeing the millions of dollars on offer in the Melbourne Cup disappearing over the horizon as foreign-trained horses gallop away with the glory.

But that disquiet could pale into insignificance if Racing Victoria officials achieve their aims for the rest of the carnival.

The Cup dream has been an easy sell for the past 25 years, since Irish maestro Dermot Weld showed victory Down Under could be achieved with Vintage Crop.

More difficult has been the task of persuading rich owners and leading European trainers that it might be worth their while to bring a whole fleet of runners with their Cups candidates to aim at the major support races during the spring carnival, group 1 and group 2 events boasting far more prizemoney than they could usually win at home. 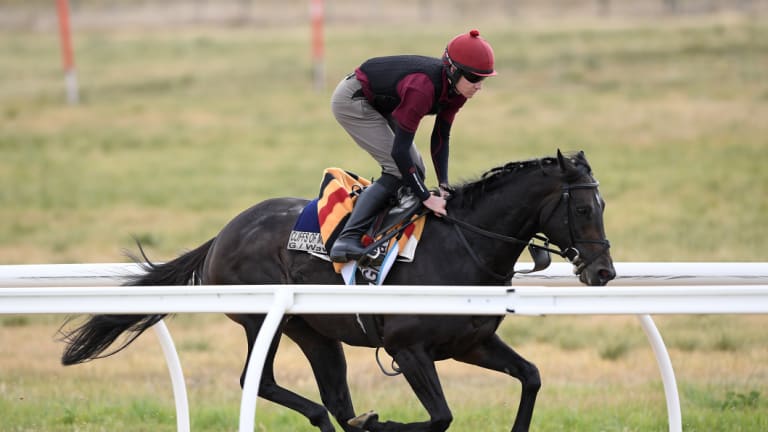 Cliffs of Moher, one of the international contingent at Caulfield.Credit:AAP

Newmarket-based Charlie Appleby, one of Godolphin's head trainers, really grasped the nettle a couple of years ago winning good races with stayers such as Oceanographer, Francis of Assisi and Qewy, horses who were regarded as well short of the top drawer in England.

Where he has led, others have followed, and RV is seeing the fruits of its efforts flower this year.

On Saturday Caulfield will boast more than a dozen foreign-trained horses competing in five different races on the card.

They are headed by the Saeed Bin Suroor-trained Benbatl, who will run in the Caulfield Stakes en route to a Cox Plate clash with Winx, and the Appleby-prepared Jungle Cat, who will look to add to his Australian group 1 haul in the Toorak Handicap. The latter might feel like a local now having been here since September, but his home base, like Benbatl's, is Newmarket.

RV's head of racing and international operations, Paul Bloodworth,  admits that it is unlikely a world champion in the Frankel mould could be tempted to Australia no matter what the prizemoney, but he argues that the Melbourne carnival was becoming a rival for the Breeders Cup jamboree in America, which is run at the same time as Cup week at Flemington.

''We are really happy because it's been a strategy of ours to get the horses out here so they come out of quarantine on Caulfield Guineas day and can have a lead-up run,'' he said.

''A lot of commentary around the internationals is that punters would like to see them before they get to their grand finals, get some idea of how they run and get more familiar with them.

''This year we can see horses like Benbatl and Cliffs of Moher before they run in the Cox Plate or the Cups.''

Critics who claim that the lack of knowledge about the invaders diminishes interest and hurts betting turnover are wide of the mark, says Bloodworth.

''I think maybe in the past it might have been the case but now a lot of people have a strong interest in international racing these days and we do as much as we can to provide information on all the horses. I am not sure that this argument that people are completely in the dark and know nothing about them holds true.''

Bloodworth points to the higher quality of the horses travelling to Australia as evidence that the strategy is working and that the overall depth of the carnival is deepening.

''Of the horses that will all be here from Saturday onwards, when the second lot arrive, we will have over 20 horses who are rated 110 or over. We have got eight that are rated 115 and above.
Last year we didn't have one horse that landed here rated 115 or above.

''Benbatl is rated 123, which makes him the second-highest [international] horse to race here behind Grandera, who ran in the Cox Plate and finished third in 2002 behind Northerly.

''I don't think it can be a bad thing that the best stables in the world are competing in our races. There's no question that it adds to our profile.

''Now we are trying to attract runners for other races. The prizemoney of the Caulfield Cup and the Cox Plate is $5 million and that has to be a focus.

''The handicap conditions of the Cups helps makes them a great temptation. The Cox Plate is a more difficult one because there are loads of options for the 2000-metre weight-for-age horses around the world – the Breeders Cup, Hong Kong, the Japan Cup, Champions Day in England. That's why it's great to see Saeed targeting probably the best horse in his stable at the race.''

Can the two-month Australian carnival be an alternative to the major festivals in the US and Europe?

''I think we already are: look at Charlie Appleby, he has got a bigger team here than he is probably going to have in America.

''Aidan (O'Brien) is bringing a huge contingent of horses. He is bringing three horses on the second shipment. He will have eight horses. He might have more at the Breeders Cup but we are definitely in competition with it.

''The Breeders Cup is a long-standing carnival and fantastic racing for a couple of days and their prizemoney is amazing. But I think from a staying perspective and with the Cox Plate we are right up there against them and are super competitive.''