Banks earned nine minutes off the bench against New Zealand in the second Bledisloe Cup match at Eden Park and the speedster is hungry for more. 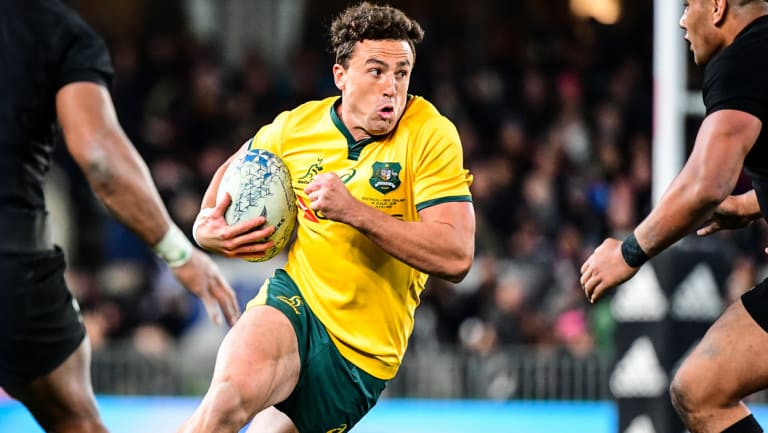 Brumbies fullback Tom Banks made his Wallabies debut against the All Blacks last weekend.

The All Blacks thumped Australia for the second straight week in what Banks described as a "bittersweet" night.

There have been 924 Wallabies but that list is littered with players who only featured in a handful of Tests and Banks is determined not to be another one-hit wonder.

"I was so stoked to make my debut but to lose in that manner, it’s pretty dampening, still a really exciting night but I was hoping for more success," Banks said.

"But just to play at that level… it’s a confidence things to be able to finally say I’m a Wallaby – that’s a pretty big achievement.

"The main thing is to not just play one or two games, I really want to cement my spot, whether it be starting role or bench role, I just want to be part of the environment.

"Sitting on the bench you have a lot of things going through your head, but then you finally get on and after you have that first impact and first play you realise it’s just rugby and you’ve got to do your job.

"You can't be overawed by the situation when you finally make it, you've got to keep performing. If you don't back yourself then things aren't going to happen for you."

The grand final rematch at Viking Park will be Banks first start since the Brumbies season ended seven weeks ago and he's determined continue his stellar season.

"It'll be good to get some game time and get my match fitness back up. It’s been an exciting but pretty stressful month and I’m just looking to come back in and play my natural game," Banks said.

"There is an element of leadership you have to bring back [from Wallabies]. But we’ve got a lot of great players so it’s just about me doing my role and success will come off the back of that."

Banks is one of three Wallabies playing for the Vikings this week, with hooker Folau Faingaa, lock Rory Arnold and scrumhalf Joe Powell all in the starting XV.

The Vikings have one of the strongest squads in the competition and new coach Nick Scrivener believes they can go one better than last year's grand final loss.

Faingaa made his Wallabies debut against the All Blacks two weeks ago and Scrivener tipped the young rake and Banks to stand tall for the Vikings.

"It's a fantastic achievement, now they're Wallabies for life so they'll be really keen on the back of that to get out and have a good performance," Scrivener said.

"They've had a taste for it and to get more they've got to perform well here."

Banks played for Queensland Country when they won the wooden spoon two years ago and then missed out on a premiership playing against them 12 months later.

"We have a really strong outfit and I think we can build a lot of confidence and do well in this competition," Banks said.

"We don't just have Wallabies but really good club players and a number of Brumbies, you can't get much stronger really, we're looking to do very well.

"I'm not sure how much I'll play but hopefully a fair bit if I’m not playing Wallabies. It’s awesome to come back and play with these boys, it's a really tight-knit group."

NATIONAL RUGBY CHAMPIONSHIP ROUND ONE