The Canberra Vikings are set to get an injection of Wallabies gold after Tom Banks, Folau Faingaa, Rory Arnold and Joe Powell were cleared to play in the National Rugby Championship opener on Saturday night.

It means Banks and Faingaa will go from Eden Park cauldron to a Viking Park selection audition for more international game time after the ACT Brumbies duo made their Wallabies debut last weekend. 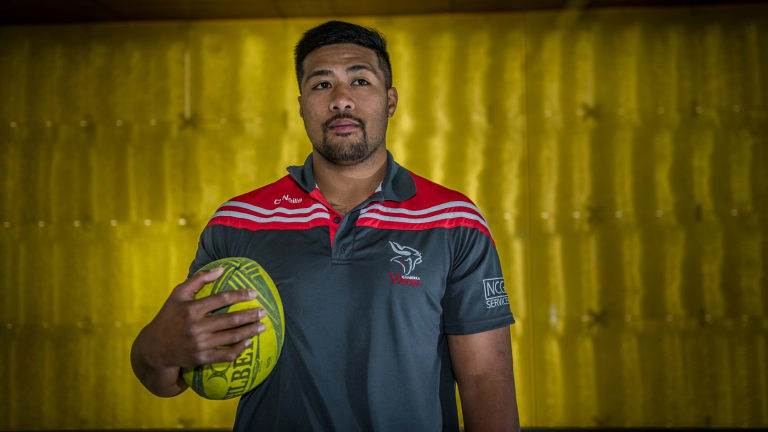 Folau Faingaa was picked in an extended Wallabies squad after playing for the Canberra Vikings last season.

The addition of the Wallabies rookies, out-of-favour lock Arnold and scrumhalf Powell will add firepower to the Vikings for their bid for grand final redemption in a clash against Queensland Country.

Arnold was arguably the best-performed second-rower in Australian rugby this season, but the towering 209 centimetre lock has been unable to force his way into Michael Cheika's Wallabies squad.

Arnold was part of the touring squad in Auckland last week, but hasn't played for Australia since September 9 last year.

He will be determined to use the Vikings as a launching pad to get back into the Test team, especially with pressure mounting on veteran Rob Simmons after some poor defensive efforts last weekend.

Powell has been on the Wallabies fringes for the past 12 months and has seen almost no Wallabies game time despite being involved in every Test squad since June last year.

Faingaa's form for the Vikings last season prompted Wallabies coach Michael Cheika to invite him into a Test training camp before the 23-year-old had played a Super Rugby game.

Banks' form in the NRC has also accelerated his rise, proving the NRC is a genuine pathway to the top.

The Vikings will name their team when they launch the season on Thursday morning, with new coach Nick Scrivener picking Ben Hyne as his skipper for the campaign.

The Wallabies have released the Vikings quartet, but Scott Sio, Allan Alaalatoa and David Pocock are being rested before the Test against South Africa on September 8.

The NRC has been a breeding ground for future Brumbies since starting in 2014, giving players including Banks, Faingaa, Arnold, Powell, Hyne, Connal McInerney, Rob Valetini and Andy Muirhead a chance to prove themselves.

Muirhead played 11 games for the Brumbies this year in his first full season as a full-time squad member, scoring four tries and holding his place on the wing.

"I guess it's the same sort of goal this year. The Super Rugby season is over and I've got next year to push for," Muirhead said.

"Get the skills a bit better and push your case [for Brumbies game time] forward for the coming seasons. I probably enjoy playing [fullback], so if that opportunity comes up I'd like to prove it at a higher level. But I'll get a lot out of [playing on the wing] as well.

"If you look at the Wallabies squad now, there are a lot of guys who have pushed through the NRC and are now fringe Wallabies. The NRC is definitely something you can use as a stepping stone to get there."

Brumbies coaches will keeping a close on the development of several players in the Vikings squad, including Super Rugby recruit Irae Simone and former Australian under-20s prop Vunipola Fifita.

There is also a chance for someone to stand tall in the back row given the lack of Brumbies in those three positions. Hyne is the only Vikings back-rower with a professional contract.

Royals flanker Luke Kimber could get a chance to step into the No. 7 jersey, but will also compete with Michael Oakman-Hunt and Mitch Tye for game time.

"I'll definitely have a red-hot crack if [I get an opportunity]. For me it's just about training well and training hard to see if I can earn that spot," Kimber said.

"There's definitely a door open. For me it's just about week to week. This is a big platform to get the body in shape and have a crack at a higher level."