Tuggeranong United are headed to the Canberra premier league finals for the first time in 15 years thanks to a result 115 kilometres away on Sunday.

Belconnen United needed to beat Cooma away to keep their season alive but the reigning champions fell 3-2, which proved enough for Tuggeranong. 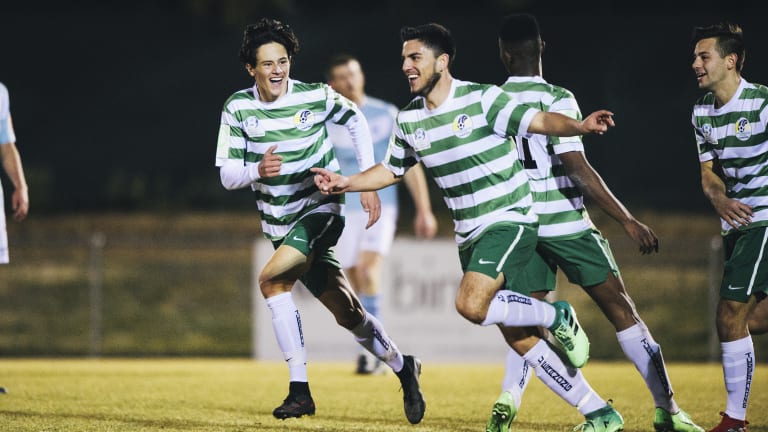 Tuggeranong United have made finals for the first time in 15 years.

Competition pacesetters Canberra FC proved too strong for Tuggeranong with a 3-0 victory in the final round at Deakin Stadium.

But it didn't matter for United coach Mitch Stevens' men, who will be making a historic trip to the play-offs.

Stevens described the feeling as "unreal" and emphasised there was no final day luck, they earned their spot throughout a gruelling 16-game regular season.

"We had belief that we had a squad good enough but when you've got the monkey on your back, it comes with a lot of pressure, especially getting to the end of the season with everyone talking about it," Stevens said.

"To actually get it done is a really special feeling. We've worked really hard this year and I said to the guys it didn't come down to luck or another result today. We put points on the board in other games this season and it came back to the hard work we've been putting in since day one of preseason."

Stevens praised the additions of Shane Murray, Regan Walsh, Conor Nolan and Tom Barton as the difference-makers this season.

Tuggeranong will face Cooma or Canberra Olympic in the first round of finals in a fortnight and Stevens believes his men will push for a grand final berth.

"We’ll be a force come finals, make no mistake. We're excited because the pressure is off now, we've made it and and can go full-tilt into finals," Stevens said.

"We’ve beaten Cooma once already this year and taken points off Canberra FC, Olympic have admittedly had the run on us but every game has been close.

"They're all good sides but in equal measure we'll go in with no fear, we can't wait."

Michael Mensah got Canberra off the mark with a bullet header on 24 minutes and Daniel Subasic scored a bomb in the second half from 40 yards on the angle.

Golden boot frontrunner Thomas James sealed the result in injury time with his 22nd goal in all competitions.

The top four are set but the league race is still alive with Canberra Olympic to play two make-up games this week.

If they beat Cooma on Wednesday it will set up a mouth-watering final day showdown against Canberra on Sunday.

"It’s a very satisfying position to be in, not only because it's been a couple of years since the boys have finished in top two but it's been a long season with FFA Cup," Canberra coach Paul Macor said.

"We've had to play three games in eight days five times, the fatigue sets in and all the boys all work full-time so it's hard on the body."

Belconnen went ahead at Cooma but their season ultimately ended when Daniel Sparrow copped a second yellow card and reduced his side to 10 men on 60 minutes.

Meanwhile, Gungahlin United and Monaro shared the points in a game that featured six goals and two reds cards at Riverside Stadium.