With the temperatures rising to 94 degrees, Woods was clearly feeling hot under the collar after he dumped his approach shot in the water at his second hole. 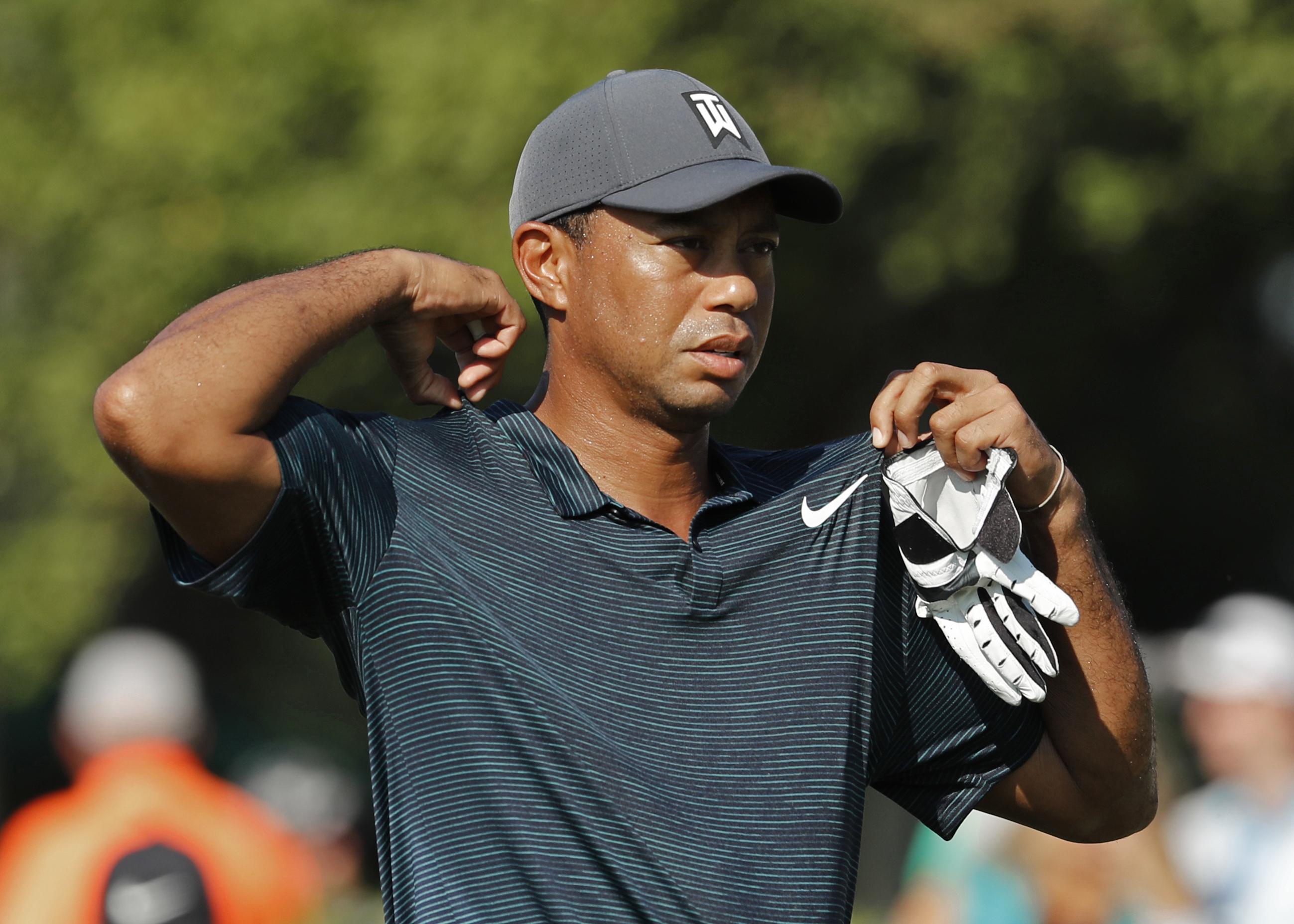 That condemned him to a bogey-double bogey start, and he shouted out to caddie Joe LaCava to hand him a fresh shirt he had placed in his golf bag, before nipping into a portaloo by the side of the tee to swap them over

The quick change did not exactly have a superman-style effect on his game, but at least Woods was able to repair the early damage, and grind out a level par 70.

That left him level with playing partner Rory McIlroy, while the other member of the all-star group at Bellerive, defending champion Justin Thomas, was only one shot better off.

And with Rickie Fowler setting the early standard with a five under par 65, it also meant Woods had not played himself out of the tournament – something that looked likely after that horrendous start. 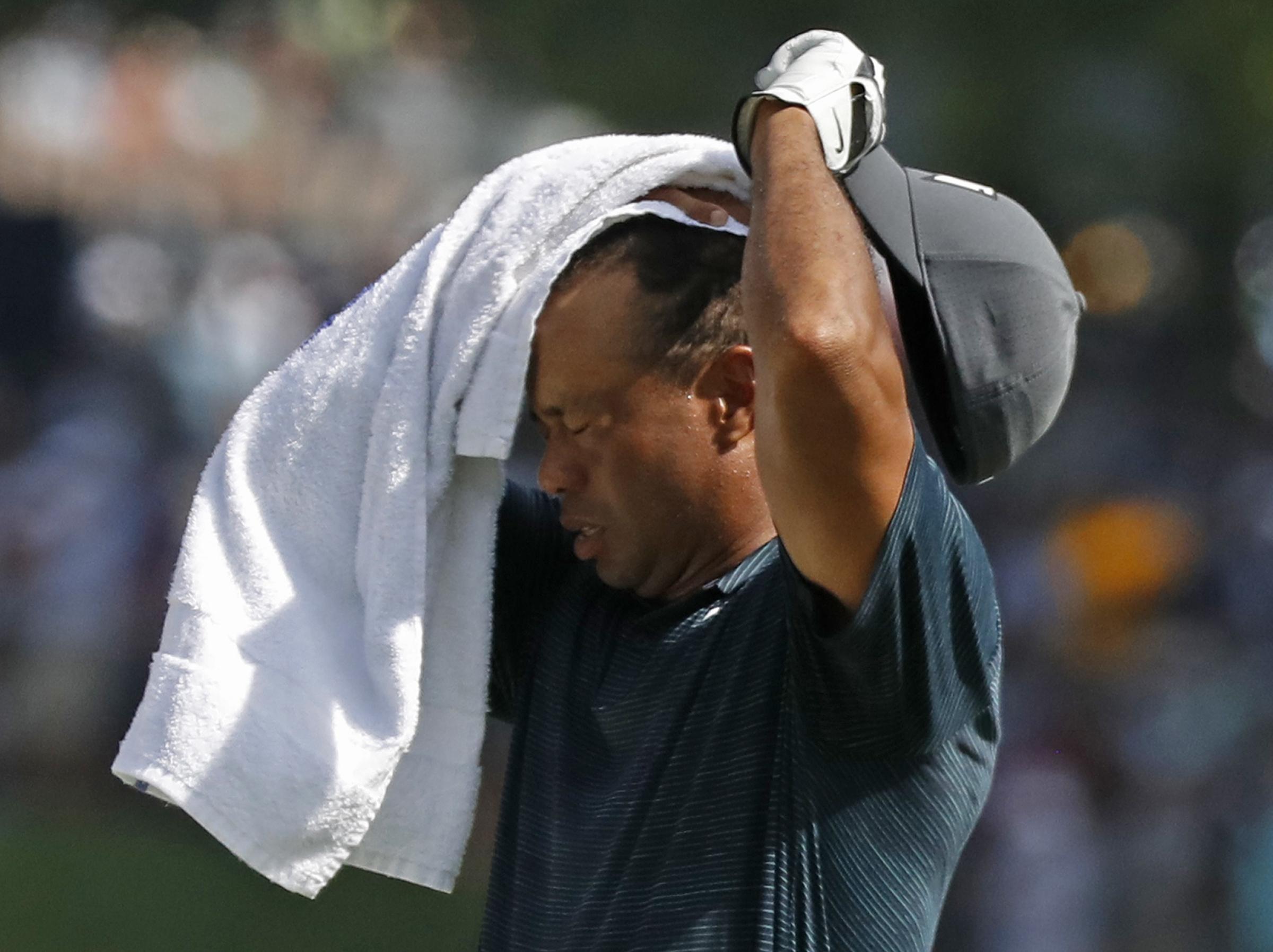 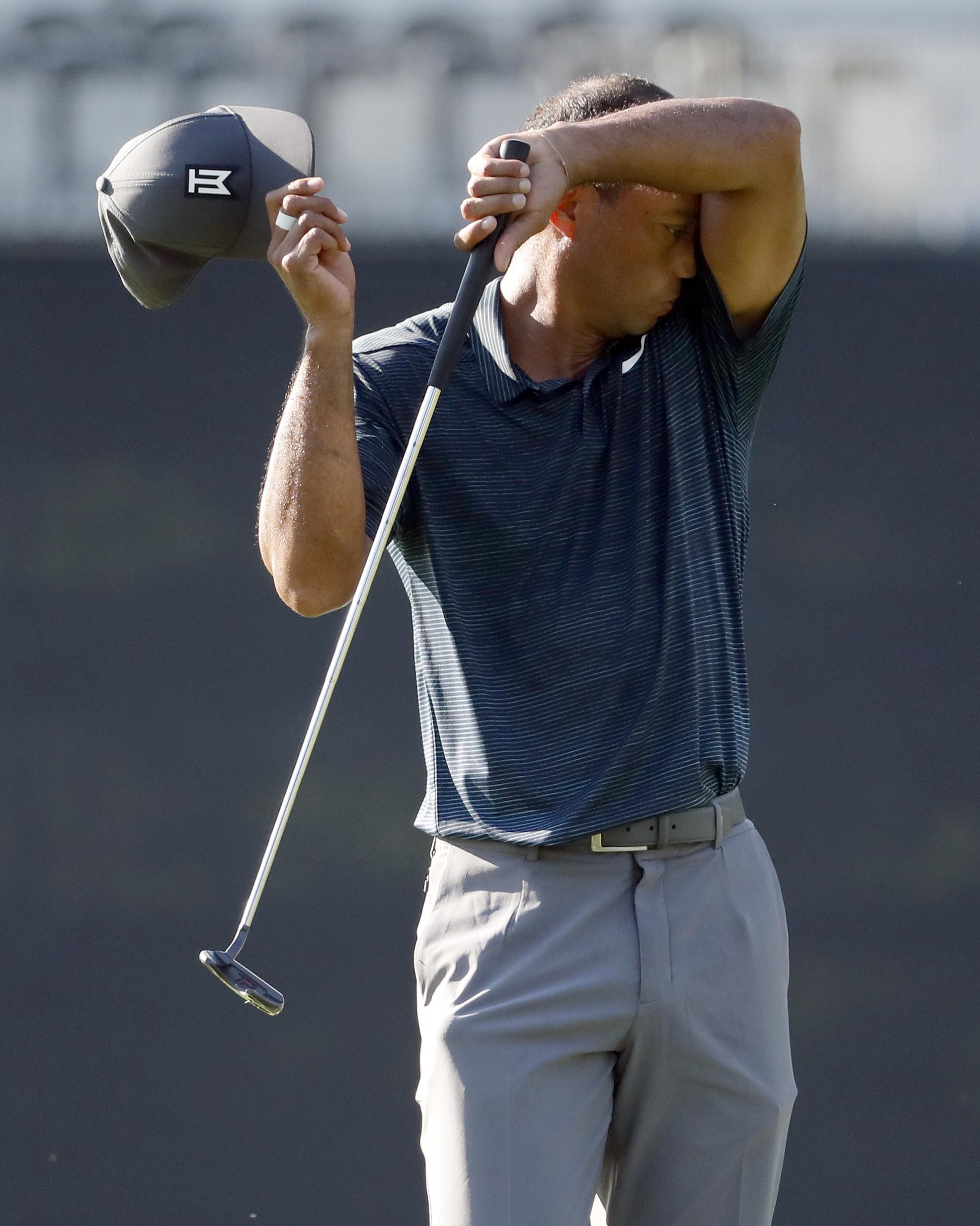 Thomas threw LaCava a quizzical look when he produced the fresh shirt. On the 12th tee – they had set out from the tenth.

The caddie quipped; “That other ones not working”, with Thomas replying: That just cracks me up”.

Woods’ response was instant. He floated a gorgeous approach to kick-in range for a birdie at the 12th, and after making a mess of the par three 16th he produced three more birdies, as well as several stunning par saves.

He said: “I always carry an extra shirt in the summertime. As you know, I sweat a lot, and I lose a bunch of weight. I have the hardest time during summer maintaining weight. 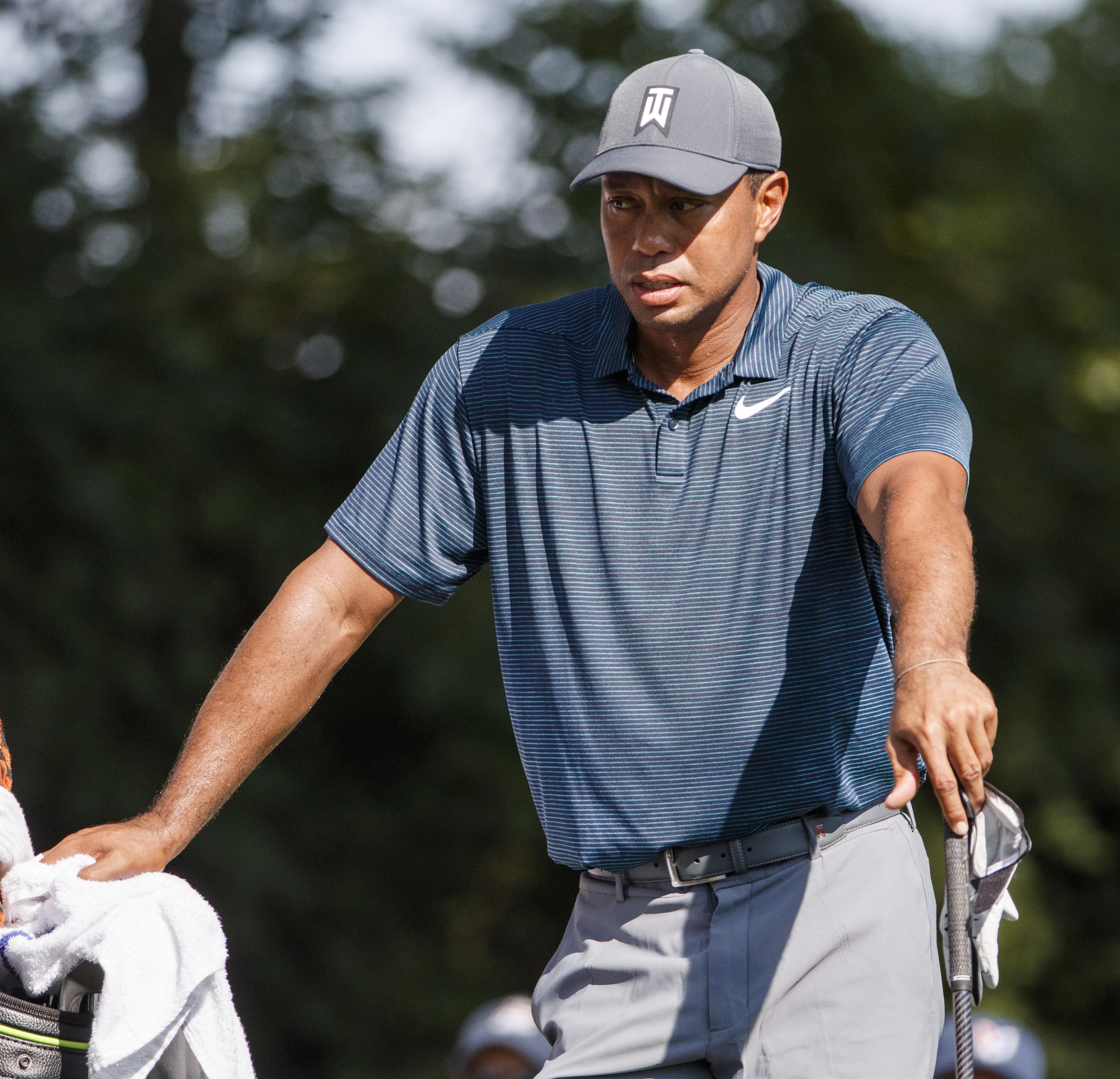 “Normally I change before the round. There wasn't a place to change on the 10th tee. So I waited until we had a little port-a-John by the 12th.

“After that I kept towelling myself down and making sure I had a good grip on the club, especially hitting out of the rough. I was able to grind out a decent score, and that kept me in the golf tournament.

“I could have easily gone the other way, being three over par through two. A lot of bad things could happen, but I hung in there and turned it around. I’m just happy to be within five of the lead heading into the clubhouse.”

As Woods got better, his playing partners seemed to get increasingly ragged.

Thomas, who romped to victory at the Bridgestone Invitational last week, was back on top of the leaderboard after grabbing three birdies in the opening six holes.

But that was as good as it got, and bogeys at the fourth and ninth meant he was relieved to finish one under.

McIlroy found it even more frustrating. He bounced back from an opening bogey with a birdie at the eleventh, and when he picked up another shot at the 13th he looked ready to burst into overdrive.

He kept putting himself in great positions to attack the flags, but his wedge game again let him down. Most of his approach shots finished 20-30 feet from the flag. and a total of 34 putts told its own story. 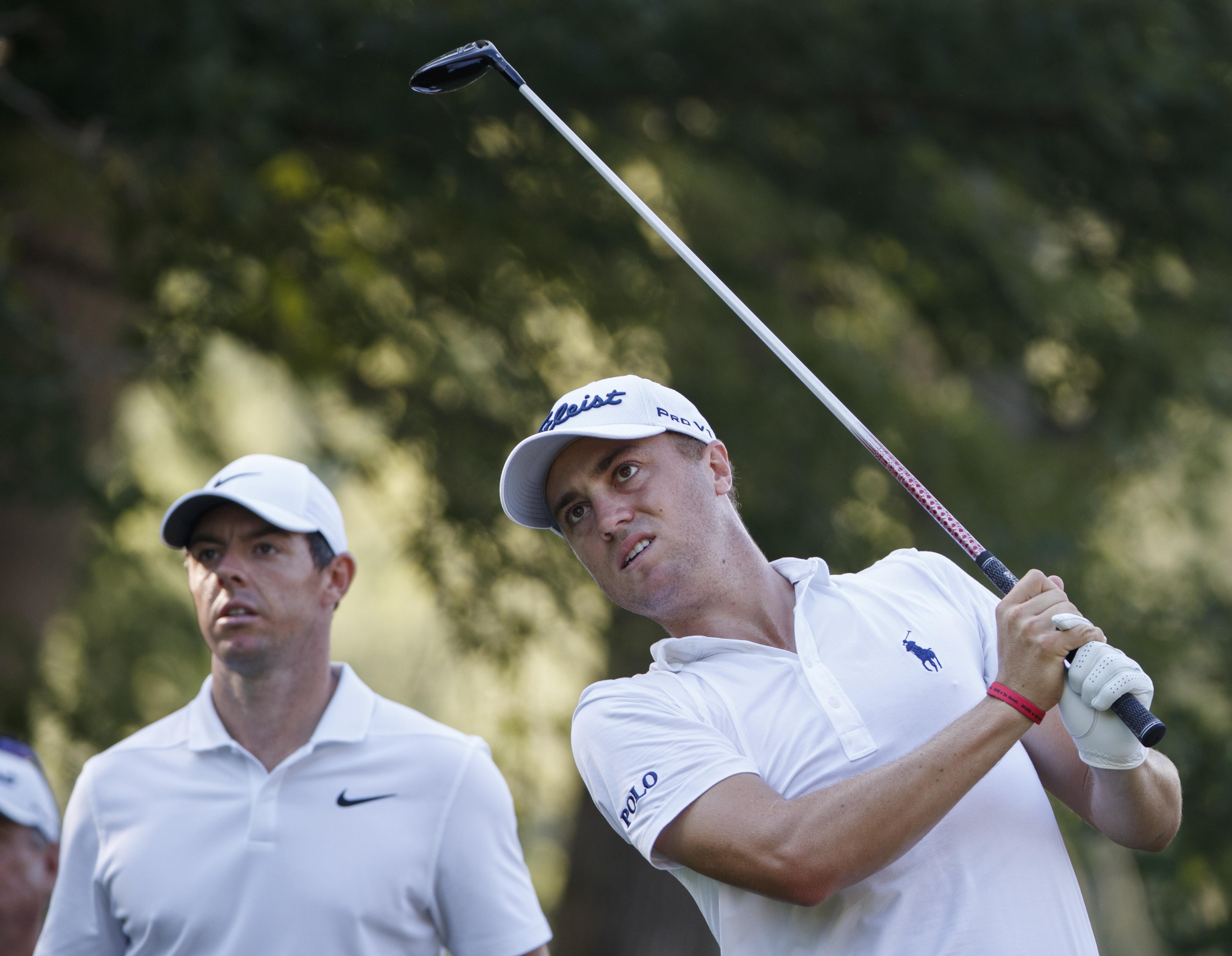 McIlroy slipped back to level when he airmailed the 18th green, and never really looked like getting back into red figures.

Amazingly, McIlroy and Thomas did not manage a single birdie between them in the final 12 holes, while Woods made four.

The four-time Major champion groaned: “It wasn't that easy out there, and the scores sort of reflect that. I gave myself a few chances, but I finished the round off with nine pars, and it should have been a little better.

“You've got to be really dialled in with your mid and short irons. If you are and you can put it on the fairway, you can shoot four, five, or six under par around here. I was just a little bit off”

McIlroy was wearing anti-inflammatory patches on his forearms, and added: “I started feeling it last weekend. The forearm has been tight, and I can feel it mostly when I’m chipping, because of the angle you are hitting at.

“I hit a lot of balls last week, working on a few things, and it's just a little inflamed. But it's fine. Nothing serious.”