Home » Sport » We want to be 'Australia's team' under new player charter: Paine

Australian cricket captain Tim Paine has revealed a key plank of a revolutionary cultural charter will be players pledging to remember that they are only custodians of the team.

New coach Justin Langer and Paine are playing a central role in formalising a blueprint for players to follow. The charter is seen as a way the team can ensure there is no repeat of the ball-tampering scandal in South Africa, which came about, in part, because of a win-at-all-costs mentality.

Administrators, coaches and players were guilty alike of adhering to this mentality, which was summed up in Cricket Australia's blunt promotional slogan in last summer's Ashes series: ''#BeatEngland". 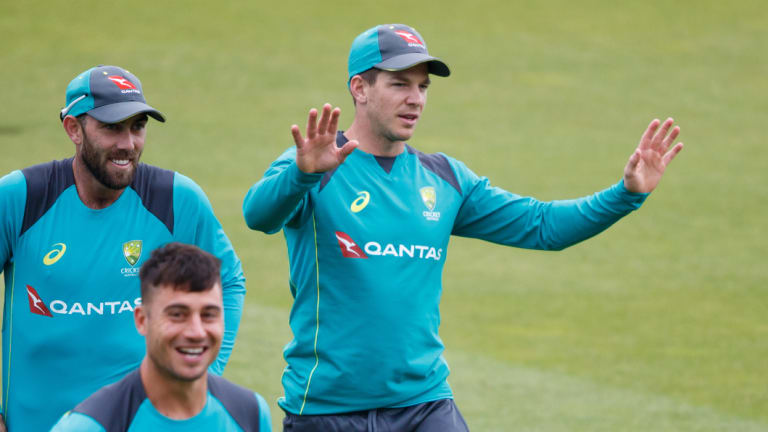 Australian players are only custodians of the team, says Tim Paine.

There are two reports into the state of the game, one focusing on the culture at Jolimont headquarters, the other into the team, each of which will be discussed at a CA board meeting on Wednesday.

Paine, who replaced the suspended Steve Smith as skipper, has fronted former Test batsman Rick McCosker, who has headed the team review, and given his take on what changes needed to be made.

He said the team charter would be linked with the reviews, and could be in place ahead of his first full Test series as skipper, against Pakistan in the United Arab Emirates next month. The squad will be announced next week.

"It's going to be how we go about it, how we want to be seen and what we are about. I know a few of the key messages coming out of it so far are that – we are Australia's team," Paine told Fairfax Media.

"That's really important. We are the lucky ones that get to represent our country and pull on that baggy green cap, which is a huge privilege. I think we have to go back to that and just remember that we are Australia's team – we are not the Australian cricket team. We don't own it. We are just here for the ride and it's important that we leave that team in a better place to when we went into it.

"That's a very important theme that we want to start to get out there – that we are Australia's team. That's one of the things that is really important to us that, that we make Australians proud."

Paine said the charter was as much about improving cricketers as "people" as it was about the team's on-field actions and restoring the faith of the Australian public.

"I know Justin and myself are taking this very seriously. We want to build a culture that makes people want to be better and produce not only better cricketers but better people,'' he said.

Players will be held to account by their peers under the charter, which runs separately to CA's code of conduct. It will be the basis for all Australian teams but each side could have different nuances.

There are similarities to the spirit of cricket pact CA chief James Sutherland introduced in 2003 but this charter has greater player input and governance.

Langer has made it clear he wants the game to be played hard but fair with players having a strong sense of "mateship". However, one of his favourite lines is "character over cover drives". He also lives by the "no asshole rule", insisting there is a line between sledging and abuse, declaring in a Sky Sports interview "there is no room for abuse anywhere".

Fairfax Media understands players have been critical of CA's role in allowing the overly aggressive culture of the team to permeate, while the Ethics Centre's review will point out issues among the executive and board. Chairman David Peever's disparaging remarks about Channel Ten during the broadcast rights battle last year have been noted.

Paine, whose first assignment since South Africa was a losing one-day series in England, said he did not need the reviews completed by the time the Test team leaves for the UAE to continue to forge change.

"Not at all. I know these reviews are finishing up shortly but as a captain and leadership and coaching perspective, whilst it's important that we get it done and have them finished, we have already started some cultural stuff within our team," he said.

"It started a while ago and it's something that we are still working on at the moment. We are confident that we will get it right and will start to develop great Australian cricket again and have a team that all Australians can be proud of."