Mariano Rivera will not be the only player elected to the Baseball Hall of Fame this week on his first try. Public ballots have shown overwhelming support for Roy Halladay, the former ace of the Toronto Blue Jays and the Philadelphia Phillies. If Halladay were here, he would surely acknowledge that Rivera, the sublime Yankees closer, helped nudge him over the Cooperstown border.

Halladay died on Nov. 7, 2017, at age 40 when the small plane he was piloting crashed into shallow water near Holiday, Fla. In one of his final interviews, he enthusiastically recalled a tutorial with Rivera at the 2008 All-Star Game, and a tip that gave him his final burst of brilliance.

“I’d been watching Mariano a lot, and my cutter was pretty good, but it wasn’t always consistent,” Halladay said in March 2017 at a picnic table beneath palm trees at the Phillies’ training complex in Clearwater, Fla. “There were times where it would be really good and other times when it just wasn’t as effective. Mariano really helped me.”

I had chased Halladay for more than two years to set up this conversation. I needed his perspective for a book I was writing on pitching — “K: A History of Baseball in Ten Pitches,” to be published this spring by Doubleday — and knew he would be a critical voice.

As The New York Times’ Yankees beat writer for most of his Blue Jays tenure, I had marveled at Halladay — the way he stoically baited elite hitters into tentative swings and never seemed satisfied unless he had worked nine innings. He had just returned to the Phillies in 2017 as an instructor, advising minor leaguers on the mental side of the sport. Halladay had rebuilt his confidence and delivery early in his career, and he never stopped reinventing himself on the mound. 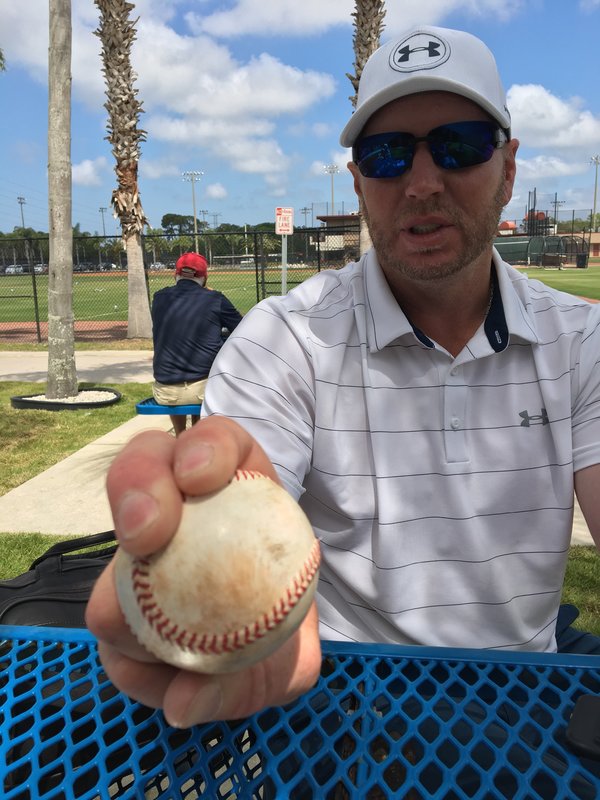 With his cutter, Halladay suspected that the problem was his thumb position. Rivera was a legend by then, on his way to a record 652 career saves, and his name became synonymous with the cutter, a pitch he had found by accident but had mastered like no other. He confirmed Halladay’s guess.

“Sure enough,” Halladay said, “he told me that one of the keys for him was making sure he wrapped his thumb under and got it on the opposite side of the ball.”

Rivera showed Halladay his technique, bending his thumb at the knuckle and tucking it under the ball, so the nail was even with the middle finger, not the index finger. This kept the thumb pad from blocking the ball’s spin as it left his hand, allowing the index and middle fingers to pull through unimpeded and send it on its path, veering inside to a lefty hitter and away from a righty.

I handed Halladay a ball, and he wrapped it in Rivera’s grip, holding his arm out straight.

“So now if you look at it from behind, you have all the ball sticking out on this side,” he said, and from the pitcher’s perspective, you could see at least half the ball peeking out from the left side of the hand. The rest of the ball was covered by Halladay’s fingers.

“So now it’s overloaded. It almost has to go that way,” he said. “When I got my thumb underneath the index finger, it was still centered. But as soon as I get it moved over, then all of a sudden, it overloads the ball on that side.”

Did it feel natural right away?

“It took a little while,” Halladay said, “and it was so awkward at times that when it was really good, I traced my fingers on the ball with a pen. I just took a black ballpoint pen and traced it, right where my finger placement was, and I put it in my locker and just stored it and kept it with me. Well the next spring, I was throwing it and it wasn’t working, I wasn’t getting results out of it. So I went back and picked up that ball and just grabbed it without looking at the marks. And sure enough, my thumb was back to here, where it felt comfortable.

“So I put it back on that mark where it was a little uncomfortable at first, but sure enough, it came right back. Then you get used to it, and you’re like, ‘O.K.’ But it was a pitch that you really had to monitor where you were, how you grip it, because you could get in bad habits just from long tossing. It’s just an odd place to throw a ball.”

Halladay beat the Yankees three times in the second half of the 2008 season; when Rivera’s teammates learned of his generosity to a rival, they fined him in kangaroo court. For Halladay, it was a springboard.

In the three years that followed — one with Toronto, two with Philadelphia — Halladay was the best pitcher in baseball. He threw the most innings, averaged 19 victories a season, and his 2.53 earned run average was the lowest among pitchers with at least 75 starts. He won his second Cy Young Award, threw a perfect game and then threw just the second postseason no-hitter in major league history.

Those three years gave Halladay a full decade at the top of his game — fewer dominant seasons than some Hall of Famers, but enough to sway the voters. Had he instead declined sharply after 2008, he would have been the same kind of candidate as Johan Santana.

Santana collected just 2.4 percent of the vote in last year’s election, not enough to stay on the ballot. But for seven seasons for the Minnesota Twins and the Mets — 2004 through 2010 — Santana was every bit as dominant as Halladay was in his first seven seasons of success (2002 through 2008).

For Santana, though, that was just about all he had. Besides a three-month renaissance in 2012 (including the Mets’ long-awaited first no-hitter), Santana was finished. At his peak, he pitched like a Hall of Famer. But his prime was just too short.

Halladay’s prime lasted just long enough. It was not all thanks to Rivera’s cut fastball, of course. But in those first three seasons after Rivera’s help, Halladay threw the cutter for 40 percent of his pitches — more often than any other starter in baseball. His other favorite pitch, the sinker, moved in the opposite direction. At times, it seemed unfair.

“Toughest on me? Halladay, that sinker and cutter,” Derek Jeter told me last spring. “I tried to just guess which way it’s going to go — and I always guessed wrong.”

Jeter hit .234 in his career against Halladay, whose control was so impeccable that his walk rate in those three years (1.24 per nine innings) was the best in the game. And if he ever lost the feel for the cutter, he knew where to find it: on the ball with Rivera’s grip traced onto it.

“I’d keep it in my locker, and when we’d go on the road, I put it in my travel bag,” Halladay said. “Stuck it in a shoe, wherever I went, and if I was struggling, I’d just pick it up. I carried it the rest of my career.”

Perhaps that ball remains among Halladay’s career possessions. What a poignant artifact it would be for the display case honoring the new inductees in Cooperstown.