Waiheke Island: "Wobbly Waiheke Wallabies", "Wallaby lemons", Michael Cheika "gasping for air". The Australian team's island paradise is turning into a pock-marked bunker as critics round on Cheika and his under-fire Wallabies.

Fresh from a shellacking at the hands of the All Blacks in Sydney, Cheika has been lambasted at home and abroad, with Rugby Australia officials forced to pledge their full support while the Wallabies prepare to venture into the graveyard that is Eden Park for Bledisloe II. 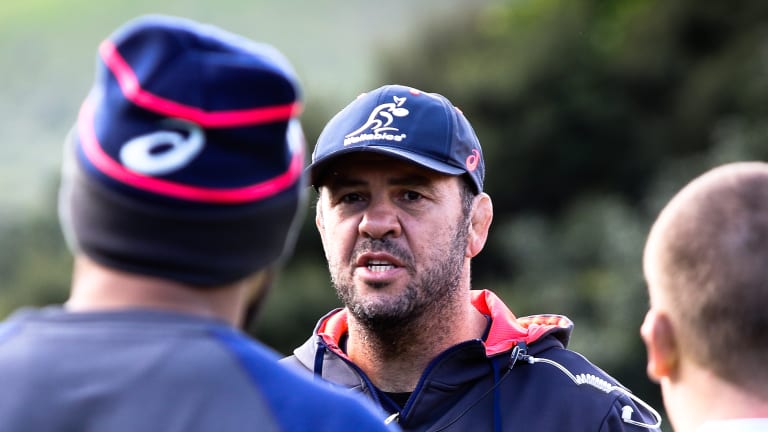 Beleaguered: Michael Cheika is getting on with the job ahead of Bledisloe II in Auckland this weekend.

Miraculously, the playing group remains blissfully detached from the growing storm bearing down on their coach. Wallabies players mooched about the island on their day off and emerging outside back Jack Maddocks breezed through a media grilling about the size of the challenge in Auckland this weekend.

But there was no hiding the fact the Wallabies are in enemy territory. Veteran Kiwi columnist Chris Rattue emptied the arsenal in a ferocious assessment of Cheika's situation late on Wednesday, while one newspaper has tried teeing up local businesses to spy on the players as they go about their Test preparation.

"Get the lifebuoys ready, because the Wobbly Waiheke Wallabies are about 80 minutes away from potential World Cup prep chaos," Rattue cackled in an acute fit of schadenfreude.

"One Eden Park onslaught from the All Blacks will leave coach Michael Cheika and his poor test record gasping for air a year out from the rugby carnival in Japan.

"It is difficult to know if another coach could squeeze much more out of those Wallaby lemons last Saturday night, and maybe not, but even charitable Cheika analysts would condemn his stewardship on their lineout performance alone."

Get the lifebuoys ready, because the Wobbly Waiheke Wallabies are about 80 minutes away from potential World Cup prep chaos.

Rattue's column comes on the back of fomenting disappointment over the Wallabies 38-13 capitulation in the first Test last week. Former Fairfax Media scribe Greg Growden, now writing for ESPNscrum, was explosive, accusing the playing group thus: "… a team whose appalling skill level makes a mockery of the professional footballer tag, and arrogant, holier-than-thou attitude does not warrant any respect from those sick and tired of a pedestrian outfit who constantly makes fools of themselves in the big games."

Add to the criticism some bizarre reports that local business have been asked to take photos of Wallabies and report back on their behaviour in return for a plug in a certain newspaper, and Waiheke Island is quickly turning into a mirage. 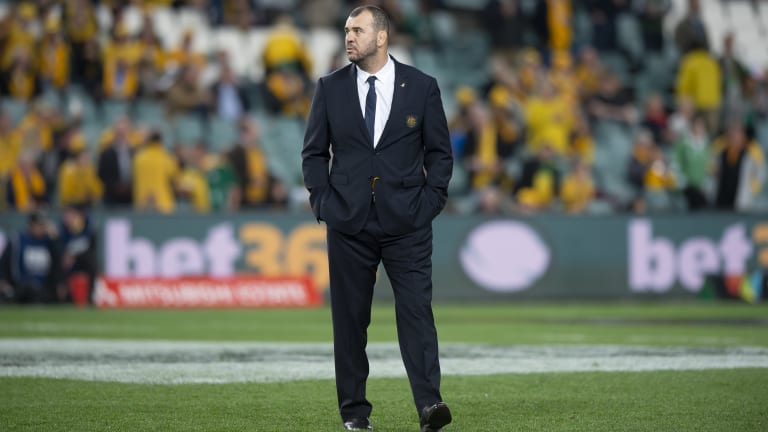 Under siege: Michael Cheika is coming under fire at home and abroad

The Wallabies are under siege, and Eden Park – a ground at which a Australia have not won since 1986 – is bearing down.

Cheika's attempt to confront his critics head on has attracted a mixed reaction. A candid admission that the coach was greeted with the sight of two of his children in tears after the Sydney loss drew ridicule from Rattue.

"While I'm not sure this is the way it was intended, he appears to have played the kids card for a sympathy vote. After that, there are no further cards to play," he wrote.

"He's an interesting character for sure. Cheika doesn't just wear his heart on his sleeve. He's got the full range of vital organs on display."