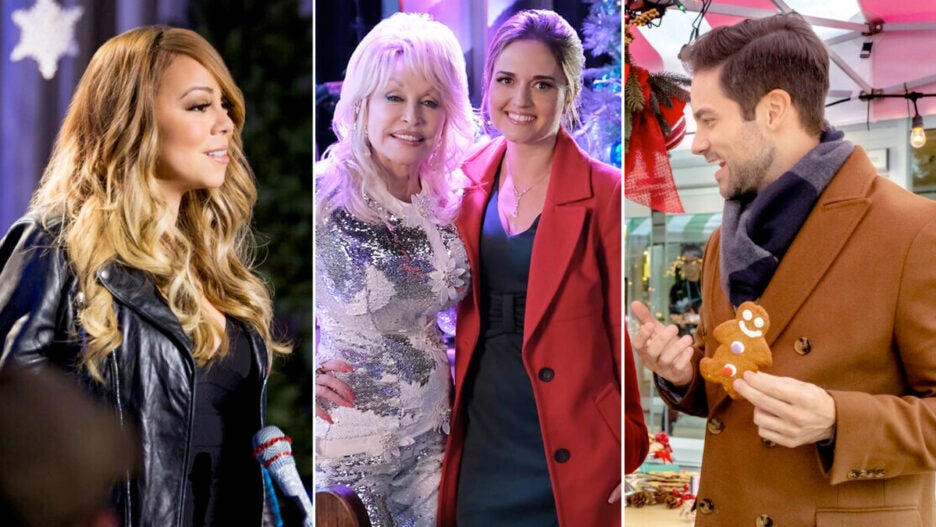 Do you love those insanely popular Hallmark Christmas movies? Do you perhaps just like them? Or do you outright despise them?

Either way, the “Deck the Hallmark” podcast has your back. Since 2018, Greenville, South Carolina–based dads and best pals Brandon Gray (loves), Daniel “Panda” Pandolph (likes), and Daniel “Grumpy Dan” Thompson (despises) have been sharing their thoughts about these holiday juggernauts, calling out Christmas feels and ridiculously fake snow with equal enthusiasm.

The podcast hit 1 million downloads in its first year, it’s been featured on “Good Morning America,” and now it’s the subject of a new book, “I’ll Be Home for Christmas Movies” (Running Press), co-written by Bran, Panda, and Dan, with TheWrap’s Reviews Editor, Alonso Duralde. “I’ll Be Home” contains reviews of 116 Christmas movies, as well as recipes for throwing your own Hallmark-watching party and a brief history of Hallmark and Christmas TV, going all the way back to the 1950s.

Here’s a sample of some of the show’s funniest and most memorable quips (from the hosts as well as some of their celebrity guests) about cable TV’s favorite small-town, cookie-baking, tree-lighting, community-center–saving Christmas movies.

Danica McKellar stars as a New York City event planner who falls in love with theme-park manager Niall Matter when she comes home to Pigeon Forge, Tennessee, for Christmas. “Deck the Hallmark” guest Justin Kirkland (Esquire.com, “My Year With Dolly” podcast) knows the layout of Dollywood well enough to raise a few red flags when McKellar sprints across the park in the last act:

“I have, as quite a rotund child, made that run from Show Street all the way up to Glacier Ridge, which is right next to Thunderhead. That is a solid 15-minute walk, 10-minute run, and unless Danica is doing double-time on her Peloton, I don’t think that she could have made that run in heels without being totally winded at the end.”

In another Hallmark film set at a Tennessee landmark, “American Idol” alum Kellie Pickler plays a Chicago financial analyst who reunites with Wes Brown, her ex and also her former singing partner, when she returns to Memphis for the holidays.

Bran: “One thing that really ground my gears: She comes into her friend’s house at 3 p.m., and she says ‘I’m going to make dinner. I’m going to roast a turkey.’ Kellie, you don’t have time.”

Dan: “Either that turkey is going to be dry as a bone, or everybody’s getting salmonella. Those are your only two options.”

Danica McKellar again, this time as a struggling artist who comes home to Colorado, where she become smitten with real-estate developer Brennan Elliott, who wants to take over the local lodge.

Bran: “‘I want to look you in the eyes when I tell you that your career is going downhill.'”

Christmas queen Mariah Carey directs and co-stars in this tale of a struggling designer (Lacey Chabert) who comes home to Ohio, falls in love with old pal Brennan Elliott and enters her daughter in the school Christmas pageant, which is apparently both a major fundraiser for the school music program and a show with really high standards.

Panda: “I have questions about how the program is funded. I understand why they want to raise money, but Mariah goes, ‘If it’s not good, keep in mind, the whole pageant funds the entire music program for the entire year.’ Here’s my thing: Does anyone go to a school pageant, paying money for the ticket and expect it to be anything other than trash that your kid’s in? And you sit there, and you’re like, ‘Yaaaaay, my kid.’ The expectations are immediately lower.”

“The Blacklist” and “Goliath” writer-producer Jonathan Shapiro joined the guys to discuss this rom-com about advice-for-single-guys author Jesse Metcalfe falling for Fiona Gubelmann as the violinist next door. After forthrightly offering his opinion — “Not the most painful thing I’ve ever experienced, but to be fair, I was stung by a Portuguese man o’ war in the crotch.” — Shapiro continues:

“Somebody is leaving Christmas ornaments on the guy’s lawn, which looks like a Superfund toxic site that nobody should be near, by the way. They’re 99-cent reject Christmas ornaments. Are they insulting him? Is this some kind of a hate crime? Secondly, if somebody coughs down the street, they hear it in their bedroom. I don’t think this is a neighborhood; I think this is a work camp of some kind.”

Struggling NYC artist Emily Osment returns home before the holidays to take care of her niece and nephew, but she is given woefully inadequate instructions by her sister and brother-in-law, including the fact that she has to serve on a school-dance committee with her ex, now a teacher at their old high school, played by Ryan Rottman.

Dan: “It was a very bold choice for Hallmark to literally have them not communicate anything. These parents walk out the door and just basically don’t say everything that’s important like, ‘Hey, you gotta participate in the Christmas decoration. Your ex-boyfriend is the guy in charge of it. You’re the only other member of that particular Planning Committee. The dishwasher is broken. You drop off the daughter.’ It is just one after another.”

Bran: “I leave a longer note when I’m leaving my dogs for a day.”

Hallmark goes “It’s a Wonderful Life” as Nikki DeLoach gets to see what her life would have been like had she pursued her high-powered corporate ambitions rather than marry nice-guy photographer Andrew Walker.

Dan: “Nikki DeLoach gets very sad when she sees her husband is engaged to someone else, and rightly so. She goes to have a good cry, and she goes where any of us would go to have a good cry: the steps leading into the kitchen, where servers have to walk in and out. Could she go to the bathroom? Sure. Could she go to her car? Absolutely. No, let me go to the highest foot-traffic spot in the entire building, where people are going to walk nonstop, and let me sit down and bawl my eyes out.”

Emilie Ullerup stars as Jenny, a NICU nurse at a hospital facing budget cuts at the holidays; the movie’s mainly about her falling in love with hospital accountant Kristoffer Polaha, who’s making those cuts, but “Deck the Hallmark” guest Heidi Gardner (“Saturday Night Live”) had questions about Jenny’s mom:

“When the mom and [Ullerup] are having a conversation when they’re making cookies, and the mom’s like, ‘Hey, I just wanna let you know, Bob and I are coming up on our 30th Christmas together.’ People don’t celebrate their 30th Christmas; they celebrate their anniversary. And I get it, it’s a Christmas movie, but that just revealed to me that these are psychopaths. And not that I hadn’t only seen white people up to that moment, but when Jenny says to her mom, ‘It’s a wonder to me how you guys are together, you’re so different. You like tennis; he likes golf.’ Those are both rich-white-people sports, and they can be played at the same club.”

Comedian Jen Kirkman is a big fan of Hallmark movies — and of the podcast — but before she became a bestselling author and Netflix-comedy-special headliner, she toiled in the world of internet startups, which led her to calls BS on the luxury workspace used by Jen Lilley’s app designer in this film:

“They have no investors yet in the app, but they have gorgeous office space. And they can afford television ads! Before an investor. Because before you get an investor to launch, you’re sitting in your pajamas in your living room starting your app, I think. I worked at dot-coms in the ’90s, and we were all crammed in one little office with folding chairs, 10 people. And they were like, ‘Someday we’ll get investors.’ And when we didn’t, we folded.”

Because sometimes one Candace Cameron Bure isn’t enough, this movie features the Hallmark queen playing twins — free-spirited, Christmas-loving high-school art teacher Chris and buttoned-down businesswoman Kate. For some reason or other, the two switch places and learn about each other’s lives. But for an art teacher who loves Christmas, Chris has a lot to learn about holiday clichés:

Bran: “[Kate’s co-worker] Greg and Chris are planning this office Christmas party, and they’re all ‘We gotta think outside the box,’ and the things they came up with that are outside the box are an ugly sweater contest and Secret Santa. It’s ridiculous; it’s literally every Christmas party in America. They couldn’t be more inside the box.”