Favourite television characters have a long shelf life; once adopted, they take up residence in your lounge room as longtime companions. No matter what else John Krasinski does – and he has done as broad a spectrum of work as anyone – there will always be a bit of friendly, cheerful Jim Halpert from The Office about him. He may not be giving those knowing looks to camera as Jack Ryan, the title character in Amazon's new series based on Tom Clancy's famous CIA operative, but there is always a sense that a conspiratorial wink might be on the cards.

That hint of humour transforms Clancy's hero, whose banter in the hugely best-selling books extends not much further than declarations such as "I am an expert in small arms!" The comedian Bill Bailey once told me he always has a Tom Clancy on the bedside table, ready for riffling through a few pages of po-faced machismo whenever he needs a nudge in the funnybone. One thing about this Jack Ryan, says Krasinski, is that "he's a real man, there's a little bit of levity to him, a little bit of realness, he's not just some stoic guy who kills people." 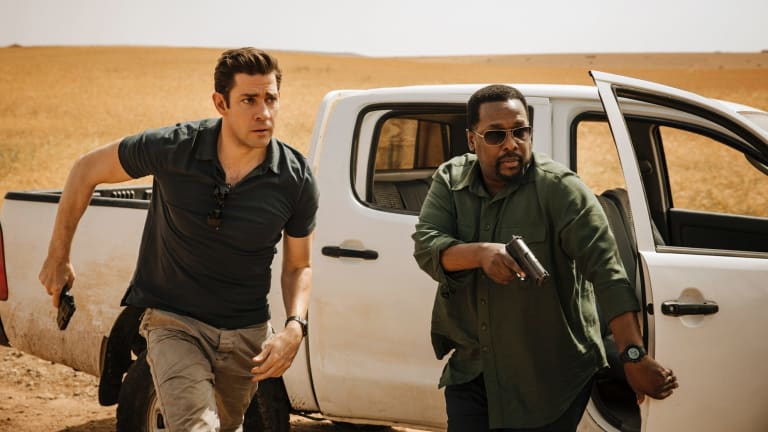 There is quite a roll-call of former Jack Ryans: the definitive Harrison Ford in Patriot Games (1992) and Clear and Present Danger (1994), Alec Baldwin in The Hunt for Red October (1990), Ben Affleck in The Sum of All Fears (2004) and Chris Pine in Shadow Recruit (20140. This series, co-created by Lost writer Carlton Cuse, is a sort of origin story. Krasinski's Jack Ryan is a clever number-cruncher tracking bad guys through their bank accounts. "He's not Jason Bourne, he's not downloaded with all these talents. He's not James Bond, someone you don't need to know where he's from," says Krasinski. He is, in fact, an office worker.

Then circumstances demand he be sent to the field. The field is Yemen. "Throughout this first series, I think you'll see me say two or three times 'I don't want to be a part of this'," says Krasinski. "And then he's thrown into it, so you actually get to see a hero created rather than just dropped into it. What that allowed for me most in my head was to come to the character knowing he has made and can make mistakes, that there is a learning process here." 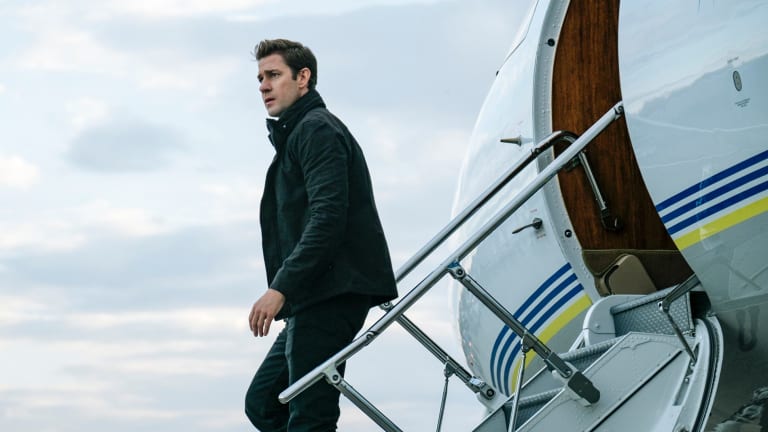 Putting flesh on Clancy's bones required that Krasinski, 38, do some learning too. "Especially when we were modernising the take on what Jack Ryan was, hugely important was the research," he says. "For me it was about going elsewhere and finding it in reality." The CIA opened its doors to him and he was able to speak to real officers.

"To be honest, I thought it was going to be one of the most boring interviews I've ever had, because I didn't think they were allowed to talk about anything.

"It turns out they were extremely generous about all the things they go through, the things they're doing, all the details of their day-to-day and how it affects their personal lives, their marriages, their kids."

He was surprised not only by the warmth of the agents he met – "I think I thought there would be a sort of severity to it all" – but also how apolitical they seemed to be. "It was almost like they had to rescind whatever feelings they had on politics in order to be the best agents that they could; I genuinely don't think anyone there had a political charge one way or the other," he says. 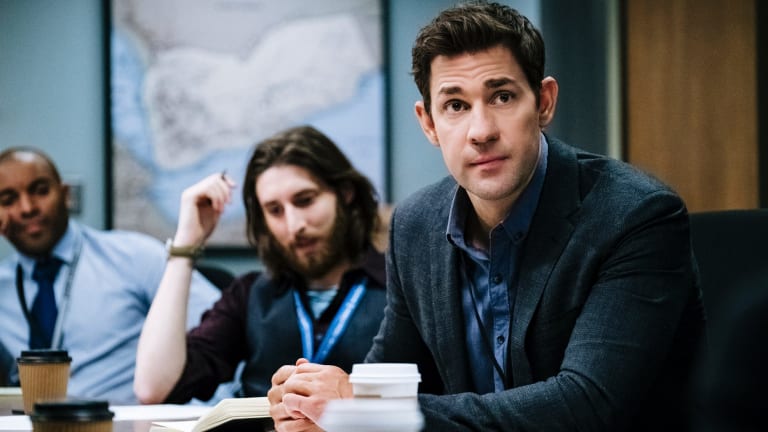 The bureaucracy itself was strategically segmented in a way he also hadn't imagined. "There isn't one group going on a mission together. It is a bunch of different departments researching different things; other people will put together the bits of data to make a mission. So in the case of Bin Laden, I think there were people running numbers on banking who had no idea the information they were gathering was helping them catch him," says Krasinski.

An internal CIA museum displays pictures of a replica of Bin Laden's compound built for practice assaults that stood for three weeks before being blown up. "They had to destroy it, because if anybody saw it they would know they were coming for a compound that looked like that and they might give away the idea," he says. It was only after the mission was accomplished that the many people involved were told about it.

For all that he is forever Jim, Krasinski had a credible record in action before taking on Jack Ryan. After The Office finished in 2013, he made The 13th Hour with Michael Bay. More recently, he had a breakthrough hit as a director with the horror film A Quiet Place, about a family trying to survive in a world where the dominant species is an extra-terrestrial predator that hunts by sound. His real-life wife Emily Blunt plays his wife in the film.

Blunt has more profile as a star of high-end action films such as Sicario, but as part of a varied career; her next film will be Mary Poppins, in which she stars as the magical governess. "I've seen it; you're going to love it!" Krasinski enthuses. He told The Times that he didn't know Blunt, with whom he has two daughters, could sing. "It's like finding out your wife can levitate – when were you gonna tell me this?"

Jack Ryan could potentially run and run; a second series was commissioned before the first one was finished. It is fast, clever and exciting; the character Jack Ryan is also compellingly decent, someone determined to do the right thing for the right reasons, which has an across-the-board appeal in the current political climate. But it won't run forever; Krasinski is keen to direct again. "Certainly opportunities I didn't have before are being presented," he says. "But one of the things I learned in this great moment of opportunity is that there is no magic key. There is no safe where all the best scripts are. What's out there is out there. And if you want to do something different, you have to do it yourself."