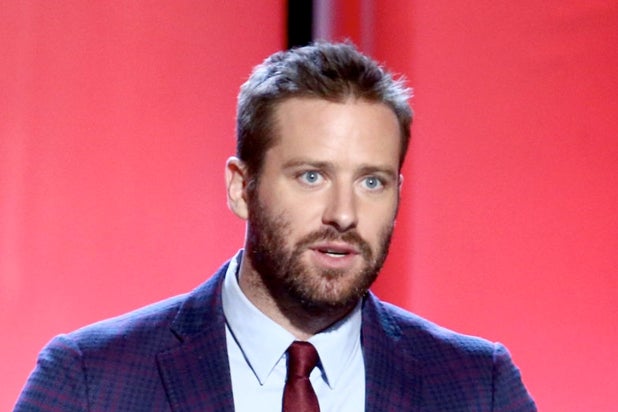 A woman on Thursday accused actor Armie Hammer of violently raping and assaulting her during an encounter in Los Angeles in April 2017.

In a press conference with her attorney Gloria Allred, the woman — identified only as Effie — said that Hammer “violently raped” her, repeatedly banged her head against a wall and committed other “violent acts” to which she said she did not consent.

“I thought he was going to kill me,” the woman said, speaking through tears, adding that afterward Hammer “then left with no concern for my well being.” She additionally describes contemplating suicide and said, “I have come to understand that the immense mental hold he had over me was very damaging on many levels.”

Hammer’s lawyer did not immediately respond to TheWrap’s latest request for comment in response to the new accusations.

The purpose of the press conference was for Effie to respond to a previous statement from Hammer’s lawyer that said “all interactions between Mr. Hammer and his former partners were consensual. They were fully discussed, agreed upon in advance with his partners, and mutually participatory. The stories perpetuated on social media were designed to be salacious in an effort to harm Mr. Hammer, but that does not make them true.”

In January, leaked messages purporting to detail the star’s sex life, including a supposed interested in cannibalism and rape fantasies, surfaced on an Instagram account under the name House of Effie. Effie also shared a photo of herself with Hammer during the press conference, one of the photos that appeared on the Instagram account. Allred would not comment on whether this Effie is the same person who runs the House of Effie account.

Several other women have since said they have had similar exchanges with the actor, and Effie said in the press conference Thursday that she has been in contact with the women as well.

Following the initial leak of text messages, Hammer dropped out of the Lionsgate film “Shotgun Wedding” with Jennifer Lopez and a Paramount+ about the making of “The Godfather,” and in February the actor was dropped by his agency WME.

Hammer released a statement shortly after he dropped out of Lionsgate’s “Shotgun Wedding” amid the firestorm, vehemently denying the claims.

“I’m not responding to these bulls- claims but in light of the vicious and spurious online attacks against me, I cannot in good conscience now leave my children for 4 months to shoot a film in the Dominican Republic. Lionsgate is supporting me in this and I’m grateful to them for that,” he previously said.