Bachelor in Paradise is premiering on August 16 and…they….still don’t have a host. In case you somehow missed it, Chris Harrison stepped aside as the face of the franchise after his indefensible defense of Rachael Kirkconnell’s racist behavior, leaving his job wide open. Tayshia Adams and Kaitlyn Bristowe went ahead and stepped in as temporary cohosts of Katie Thurston’s Bachelorette season, but we still have no idea who’s hosting BiP. What we do have? THEORIES, MY FRIENDS.

ABC is presumably going to hire someone who’s already familiar with Bachelor Nation, and in my opinion as Someone Who’s Thought About This Way Too Much™, they’re going to go with an alum. And I am willing to bet money* (*imaginary money) that it’ll be one of these five people:

I already laid out my entire, somewhat deranged, theory about Nick Viall being host of Bachelor in Paradise, but here’s the TL;DR: Nick is currently in Mexico with fellow Bachelor Nation alums Jared Haibon, Ben Higgins, Wells Adams, and Dean Unglert. Yeah, they might simply be enjoying a vacation—but c’mon. Bachelor in Paradise films in Mexico and production is scheduled to begin any day now. It all adds up!

So, why Nick specifically? His vast experience on the franchise (two seasons of Bachelorette, one season of Bachelor, and one season of Bachelor in Paradise) makes him an obvious choice—and on top of that, he’s proved that he’s a natural host on his podcast The Viall Files. He just has that hosting VIBE, what can I say?

Wells Adams is already BiP’s resident bartender and unofficial cohost, so it seems only natural that he’d step into the role of host. The only thing that makes me think Wells might not do it? An interview he gave to People *prior* to Chris’s controversy, during which he was asked about taking over for the longtime host one day and said, “I like just being the cohost at these silly athletic dates. That seems more up my alley.”

Emmanuel Acho did a stellar job hosting “After the Final Rose,” and a lot of fans are hoping he’ll become the new permanent host of all Bachelor franchise show. And he seems totally up for the job, telling The View:

Becca is currently single post-split from her ex-fiancé Garrett Yrigoyen, and while she’s not down to be a contestant on BiP, she did say she’d love to be a cohost. “I would do Paradise if I could be Wells [Adams] or a sidekick to Wells…Wells is awesome at what he does, right? But he’s not a single woman who can really comment on the guys running down the beach or the women in their cute bikinis,” she explained, adding, “I could be the girl they could come to for advice that they probably don’t need or want, but it could be a fun time. I heard that the shrimp tacos there are amazing.” 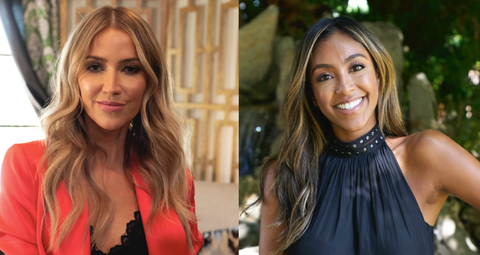 Tayshia and Kaitlyn are fresh off cohosting The Bachelorette so they seem like obvious choices for Bachelor in Paradise. However! A source recently told Us Weekly that “[They’re] just helping out this season,” and that “This is not their permanent position,” which kinda implies they won’t jump into BiP.

You love all the deets on Bachelor Nation So do we! Let’s overanalyze them together.