All's fair in love and war – unless you're on a reality TV show, in which case the battle is usually a war of words, and the fairest of them all tends to get sent home.

That's certainly the case in Wednesday night's episode of The Bachelor, when down-to-earth bachelorette Blair was eliminated just after being confronted by one of the resident "mean girls", Romy.

But, we digress. Before we get to the big blow up of the episode, we must tick off the requisite Single Date, Group Date, Controversy and Cass Catch-up (Cass-up?).

Wednesday's single date goes to Sophie, the likeable blonde Bachelor Nick "Honey Badger" Cummins hit it off with quickly in the first couple of episodes of the show.

They go for a spin in a hydrofoil boat on Sydney Harbour and for the most part it looks windy as all hell – but adventurous, which is good because both Sophie and Honey Badger love themselves some adventure.

After the boat ride, it's time for serious chats to see if that all-important romantic connection is there. Cummins dials up the romance by… asking Sophie why she seemed awkward on the group date in week one. 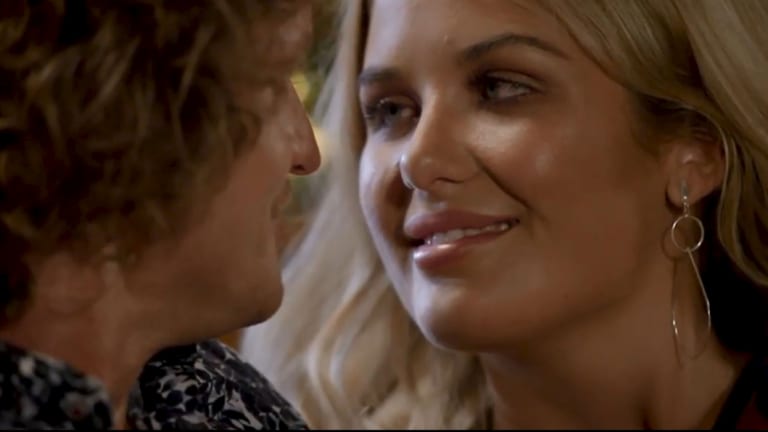 Sophie got up close and personal with Bachelor Nick Cummins in Wednesday night’s episode.

Mate, come on. Considering the pair had to hold a series of yoga moves and stare deeply into each other's eyes, while a photographer took pictures and a gaggle of hungry-eyed bachelorettes watched on, it's lucky Sophie didn't spontaneously combust on said group date.

Good sport Sophie tells Cummins she's sorry – "I do apologise," she says, sounding more like she's in the principal's office than on a date – and makes it clear that she's very interested in him. All is clearly forgiven, because soon they're kissing and Sophie's holding a rose firmly in her lap.

Next, it's the group date – and it's a doozy this week. Cummins' dad, sister and brother are paying a visit to the bachelorettes, to try and discern who might be best suited to their beloved Nick. (Cass nearly melts into the ground when she recognises his brother, Jacob, whom she's met before.)

Cummins' sister Bernadette knows how to ask all the right questions, and she makes quick work of getting the real story out of the bachelorettes. 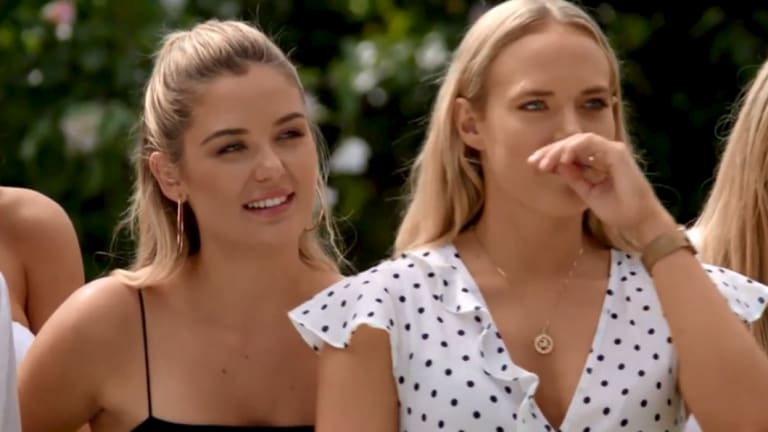 Cass when she recognises the Bachelor’s brother, Jacob.

She builds a rapport with Brittany and Brooke (two of the season's frontrunners), and then gets down to business with two of the show's "mean girls", asking Cat about her jewellery business to ascertain if she's on the show for the right reasons, and listening to Romy mouth off about Cass.

"Nick actually knows Cass from before," Romy tells Bernadette. "She plays at the same rugby club as Nick and she was already in love with him coming into this.

She sticks the boot in when Bernadette asks if Cass would be a good match for her brother.

"No," Romy replies. "No. She's really struggling. I feel like she's desperate. And I think that's the emotional immaturity." 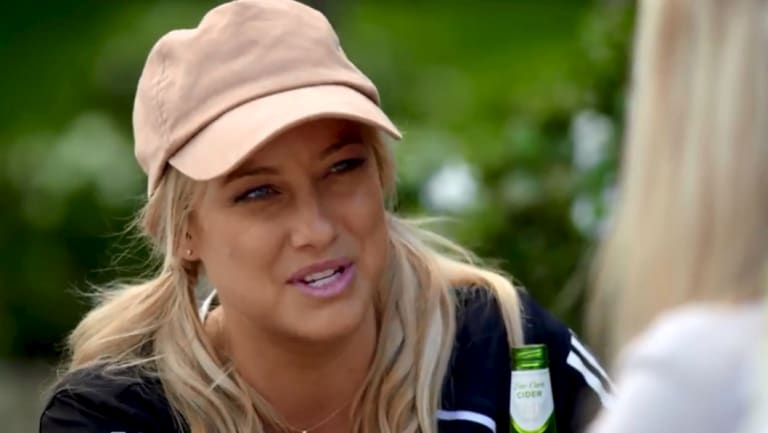 “She’s desperate.” Romy didn’t hold back in her chat with Cummins’ sister, Bernadette.

"Is she struggling because there are other women here and she's already hook, line and sinker?" Bernadette asks.

"Oh, yeah. Yep," Romy replies. "I can't imagine being in love with someone when I'm 23 and being in this [situation]. It's hard to watch, to be honest."

You know what's hard to watch? Women sabotaging women for their own personal gains.

Blair overhears everything, and she's unhappy with Romy's attempt to play God – so she fills Cass in. Later in the evening, in the mansion's loungeroom, Romy goes off like a firecracker.

"I'm a little bit annoyed Blair, because you overheard my conversation with Bernadette," she starts. "You said that I was dissing the 23-year-olds in the house, which proves to me that you actually didn't overhear it because it's absolutely not what I said.

"Tell me why you were listening to my private conversation with Bernadette. Can you answer that?"

"Yes, I was in my bedroom getting dressed," Blair answers. 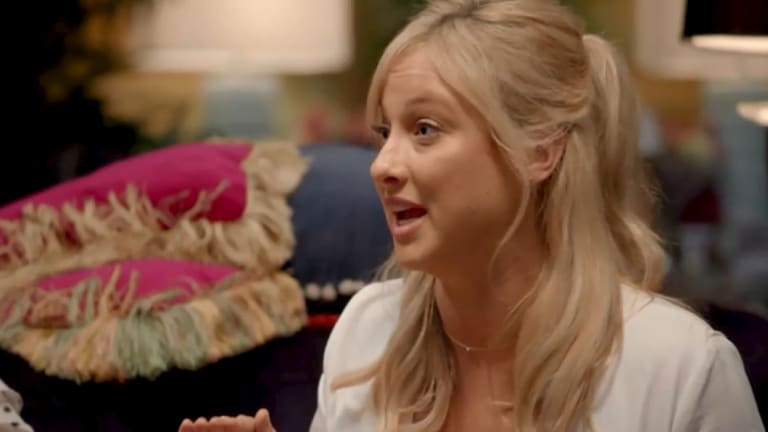 Romy is not pleased.

"Blair, it's really rude to eavesdrop on a conversation," says Romy.

"I'm not eavesdropping," Blair fires back.

"You have no class and this angers me," Romy tells Blair. "Like, don't f— with me. Don't ever put words in my mouth again. Come to me like an adult."

"I just repeated what you said," Blair replies.

"You didn't repeat what I said!" Romy yells.

Blair tells Romy she's sorry if she's made a mistake (spoiler alert: she hasn't) and asks Cass if she's happy about what Romy told Bernadette. Cass urges everyone to just stop talking behind each other's backs, displaying plenty of that emotional maturity she supposedly doesn't have.

"But it's not behind each other's backs when you're asked a question and you answer it truthfully," Romy argues. "I'm not going to lie to Bernadette, and I don't like that I've been targeted in this way."

"That's fine, you just need to tell Cass next time – before," Blair says.

"No, you've got nothing to do with this," Romy says. "Mind your own business." 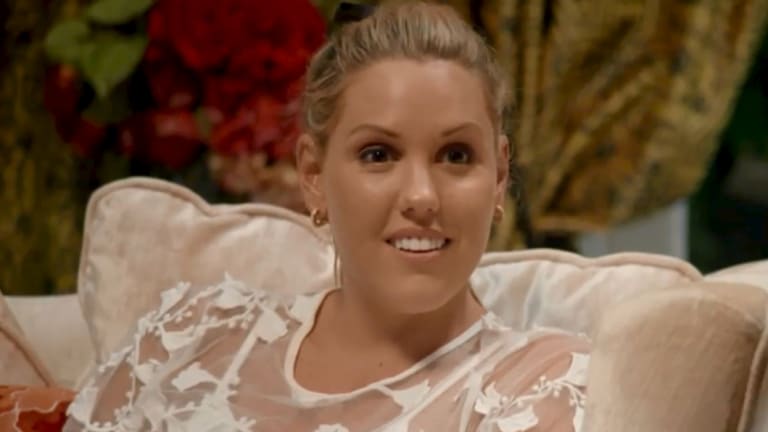 A few TV minutes later, we're at the rose ceremony. Blair, who admittedly didn't seem to have any connection with the Bachelor, is left without a rose.

"Bye, don't come back," Romy says to the camera, and it's hard not to imagine how smug she felt at this exact moment in time. Seems nice girls finish last – at least at this stage of the war.