It’s Streamageddon: On September 14th, what choice will you make? You’ve only got so many hours in a day for bingeing, so you’ll have to make a tough choice between a check-in on Bojack Horseman, Beau Willimon’s big-budget follow-up to House of Cards for Hulu (featuring Sean Penn and space exploration!) and an Amazon-catered midlife crisis with your pals Maya Rudolph and Fred Armisen. That’s assuming you’ve already gotten caught up with Sarah Silverman’s talk show and a fly-on-the-wall look at the thriving culture of soccer in Spain, and … and… [takes deep breath]. Better get a move on, too, because you’ve only got one week until Netflix unloads Cary Fukunaga’s brain-busting sci-fi series and an Israeli import Americanized with two familiar stars. (One has the voice of a songbird. The other was the Boss.) Who needs sleep? Here’s what you’ll be streaming until your eyeballs burst over the next month. (Need some non-streaming TV recommendations? They’re right here.)

Bojack Horseman, Season 5 (Netflix, Sep. 14th)
Brace for the annual depressive spiral that can only signal the return of Netflix’s brilliant, boundary-pushing animated  satire. The unhappiest horse in show business is back, and the last season concluded with Princess Carolyn (Amy Sedaris) selling a series pitch starring Bojack (Will Arnett) — perhaps the promo image of a noir-styled shooting at an elegant party is merely part of that? Or could the chronically miserable Bojack actually meet his demise-by-genre-homage in the new episodes? This show could go anywhere. Hooray for Hollywoo!

The First (Hulu, Sep. 14th)
With House of Cards all but in his rearview, creator Beau Willimon is moving on — and changing residencies. His Hulu series is a handsomely-budgeted drama revolving around humankind’s first manned mission to Mars. Sean Penn headlines this ground-level imagining of humankind’s journey to the Red Planet, with national tragedies, rigorous pre-flight training, terraforming discussions and personal trauma — notably involving Penn’s damaged-goods daughter, courtesy of breakout star Anna Jacoby-Heron — playing a part. With Damien Chazelle’s Neil Armstrong biopic First Man bound for multiplexes in October, space exploration is having a moment … though who could be blamed for wanting to leave Earth?

Forever (Amazon, Sep. 14th)
In the sleepy Californian suburb of Riverside, spouses Oscar (Fred Armisen) and June (Maya Rudolph) have built themselves a nice life. After 12 years together, however, it’s gotten dull. Their domestic tranquility begins to unravel, and then … . There’s something mysterious about this new dramedy from Master of None co-creator Alan Yang and 30 Rock veteran Matt Hubbard. Let’s just say that there’s more than meets the eye here. And really, who wouldn’t want to spend more time with these SNL vets in midlife-crisis mode?

The Good Cop (Netflix, Sep. 21st)
Hashoter Hatov was a hit in Israel, so now American audiences are getting their own version of this series melding the buddy-cop and the family-comedy traditions. The concept stays the same — a strait-laced detective gets unsolicited advice from his old man, a former policeman fired from the force for loose-cannon tendencies — with Josh Groban and Tony Danza playing father and son. Whether Tony Caruso Jr. wants to hear it or not, Tony Caruso Sr. insists on guiding him through his investigations, his dating life, and just about everything else. For the Brooklyn Nine-Nine diehards that saved the show from cancellation, this could be their next major obsession.

Hold the Dark (Netflix, Sep. 28th)
Director Jeremy Saulnier scored a pair of gnarly genre hits with Blue Ruin and Green Room, and hopefully he’ll continue that hot streak as he ditches the color-title motif and heads into the wilds of streaming. Jeffrey Wright busts out his Westworld-honed serious-face in this thriller that sends him into the forbidding icy tracts of Alaska to solve a mystery involving a child allegedly abducted by wolves. The truth, as it so often is these kinds of movies, is darker and much more complicated. (Hint: It may or may not have something to do with a soldier in Iraq played Big Little Lies‘ Alexander Skarsgard … ) Saulnier has described this new film as his most ambitious to date, commandeering the largest budget as well as a menagerie of animal actors; there’s a shootout sequence that’s easily one of the best choreographed action set pieces of the year. 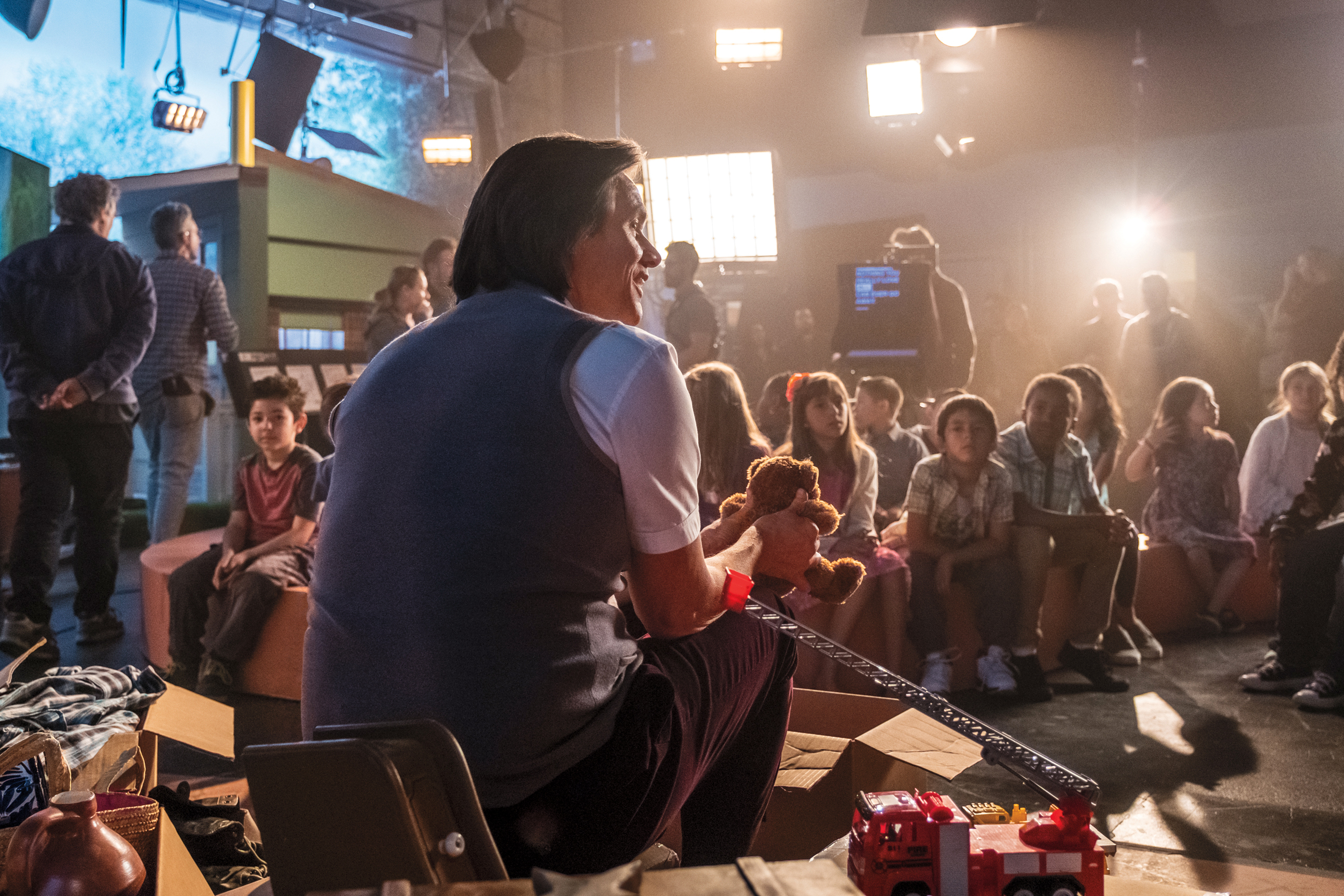 Best Movies to See in Sept.: Michael Moore on Trump, M.I.A. Doc and ‘The Predator’

I Love You, America, Season 2 (Hulu, Sep. 6th)
Last year, Sarah Silverman set out on the humble mission to heal the divides widening across American culture and unite a grateful nation. Turns out that the job’s going to take more than one season’s worth of programming, so the lovably foulmouthed comedian has returned for another round of group therapy on a country-wide scale. The new episodes will return to the format of confessional late-night, with the familiar monologues, interviews and pre-taped segments given a vulnerable edge by an unpredictable host. In the first season, she did everything from engage Texas firefighters in a discussion about public pants-shitting to addressing the accusations leveled against her personal friend Louis C.K. … so nothing’s off-limits.

King Lear (Amazon, Sep. 28th)
Anyone who’s made it through their high school’s Shakespeare crash course knows the drill: rich oldster divides his fiefdom between his most obsequious daughters; the virtuous offspring gets jack-squat, leading to betrayal, madness and a stage full of corpses. This import from the BBC revitalizes the Bard’s text by moving the action to a highly militarized present-day London with a bleak, color-drained aesthetic to match. But this rendition also assembles a cast of titans, with Anthony Hopkins tackling the deteriorating king in a thunderous performance and no less than Emma Thompson, Emily Watson and Lady Macbeth‘s Florence Pugh as his scheming adult children. Enjoy a night at the theater without leaving the couch.

Maniac (Netflix, September 21st)
If a doctor promised you that the right series of pills could alter your mind however you want — removing heartbreak, curing depression, erasing self-doubt — you’d be crazy not to do it, right? Rudderless screwup Annie (Emma Stone) and schizophrenic malcontent Owen (Jonah Hill) both figure they’ve got nothing to lose when they sign up for a miracle-drug medical trial. Of course it’s too good to be true! Director Cary Fukunaga brings a surreal sense of levity to the 10-episode series adapted from a Norwegian smash. This could possibly be the WTF small-screen sensation of the season.

Quincy (Netflix, September 21st)
Maybe you know him from albums like The Dude, or as Oscar-nominated composer/EGOT recipient, or the sonic mastermind behind Michael Jackson’s most accomplished albums. Or maybe you know Quincy Jones simply as “Q,” a nickname that puts his overall-icon status on par with Prince and Madonna. This documentary approaches the singular figure from all of his many sides as musician and man, and who better to provide an inside look than his own daughter? Rashida Jones gets behind the camera as co-director of this all-access peek into a complex interior life, landing the most candid to-the-camera conversations imaginable from a guy who already tends to give pretty incredible interviews.

Six Dreams (Amazon, September 6th)
For their first original Spanish-language series, Amazon profiles a half dozen different figures from the world of — pardon the regionalism — soccer. Three players, two coaches and the female president of the country’s smallest-budgeted team each allowed a camera crew to follow them over the course of one season, complete with all the triumph and defeat viewers expect from sports documentaries. You do not need to be fútbol fanatic to be inspired, moved or pumped up by this — you can just watch it for kicks. (Sorry.)