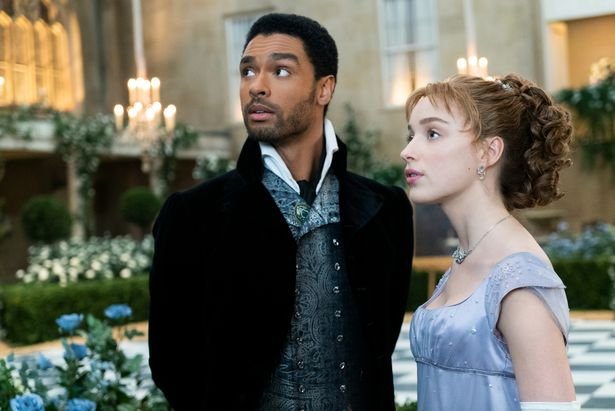 Nicola Coughlan has revealed she would save herself embarrassment while watching Bridgerton with her mum and hit fast-forward to skip all the sex scenes.

The Irish actress, 34, who stars as Penelope Featherington in the hit Netflix series, confessed to getting into ‘trouble’ when she and her mum sat down to watch the show back.

As Nicola puts it, it’s basically ‘non-stop sh*gging’ and she didn’t quite fancy tuning into a very naked Duke of Hastings, or watching Daphne Bridgerton indulge in a little self-pleasure, while her mum was sitting by her side.

Speaking on the Make It Reign podcast with Josh Smith, Nicola joked: ‘I knew pretty well how the episodes went and the amount of sexiness in them. When I showed her the first episode and Johnny Bailey’s bum appeared very quickly into episode one, She was like, “What is going on”

‘I had to say, “It’s not my fault I didn’t write it, it’s romance novels and it’s a really important part of the story,” but I was still in trouble.’

Nicola continued: ‘Then with episode six I thought, “Oh my god, what am I going to do? It’s non-stop sh*gging, I am going to be in so much trouble!”

‘What I ended up doing was just fast-fowarding through all the sexy bits.’

Nicola – who was recently seen trying to persuade Kim Kardashian to binge-watch Bridgerton – joked that at the end of episode six, her mum was left a little confused and said: ‘That one was very short!’

Bridgerton has gone on to become Netflix’s biggest every original series, as since its release on Christmas Day, the period series has been watched by a huge 82million households – a feat Nicola had never imagined.

She previously shared her concerns that nobody would tune in and had fully accepted that Bridgerton would be a ratings failure.

‘I just fully had a moment where I was like, “it’s fine, it’s fine, it’s fine, I’ve dedicated a year and a half of my life to it and I know hundreds of people put in so many months of their life into it but it is fine, no-one will watch it,” and I just accepted that,’ Nicola admitted.

She couldn’t have been more wrong as Bridgerton has taken viewers by storm, with bosses since confirming that it has already been picked up for season two.

While the first season focused on the relationship between the Duke (played by Regé-Jean Page) and Daphne Bridgerton (Phoebe Dynevor), the second series will centre around Daphne’s older brother Anthony Bridgerton (Bailey).