Any Celebrity Big Brother viewers still on the fence about Jermaine Pennant’s treatment of Chloe Ayling are likely to have made their minds up after uncomfortable scenes in Wednesday’s episode.

The footballer has been carrying on a flirtatious relationship with Chloe for a week in the house, while allegedly not telling her that he’s been married for four years to model Alice Goodwin.

Chloe finally found out the truth following her eviction on Tuesday night — but viewers on Wednesday saw highlights from earlier on eviction day where Jermaine tried turning the house against her.

Unsurprisingly, Dan Osborne — who isn’t exactly known for his own sterling behaviour— seemed to agree that Chloe was trying to manipulate the situation for her own gain.

Chloe had tried confronting Jermaine about whether he was telling the truth about his relationship status, and got upset when he demanded they wait until they got outside the house to clear things up.

After that, Jermaine approached Dan Osborne and Ryan Thomas in the hot tub and tried convincing them that it was Chloe who was twisting the facts to curry favour.

“All this is because she’s up for eviction,” he insisted. “She starts chirping off!”

“Don’t play these games with me because you’ll lose,” the footballer then warned, as he performed some sort of victory dance while Dan chuckled. 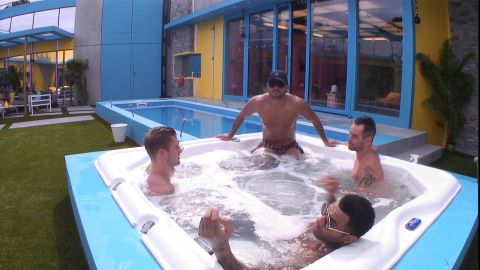 “You are right though, man,” Dan chimed in. “She got put up for nomination, and all of a sudden.”

“She starts barking,” Jermaine interjected, comparing Chloe to a dog.

Dan then questioned if Chloe had simply “taken it all the wrong way”, with Jermaine dismissing his conduct: “That’s exactly what she’s done. That’s not my fault!”

Jermaine then snarked: “What does she do [in the house]? She cracks joke. We all crack jokes about her!”

It’s safe to say that both Jermaine and Dan may have a rude awakening when they leave the house:

The tables turned later in the evening when Chloe was evicted, as Jermaine pulled her into the bathroom and desperately begged her to downplay their relationship on the outside world. That hasn’t happened, as she’s since sent a message directly to his wife.