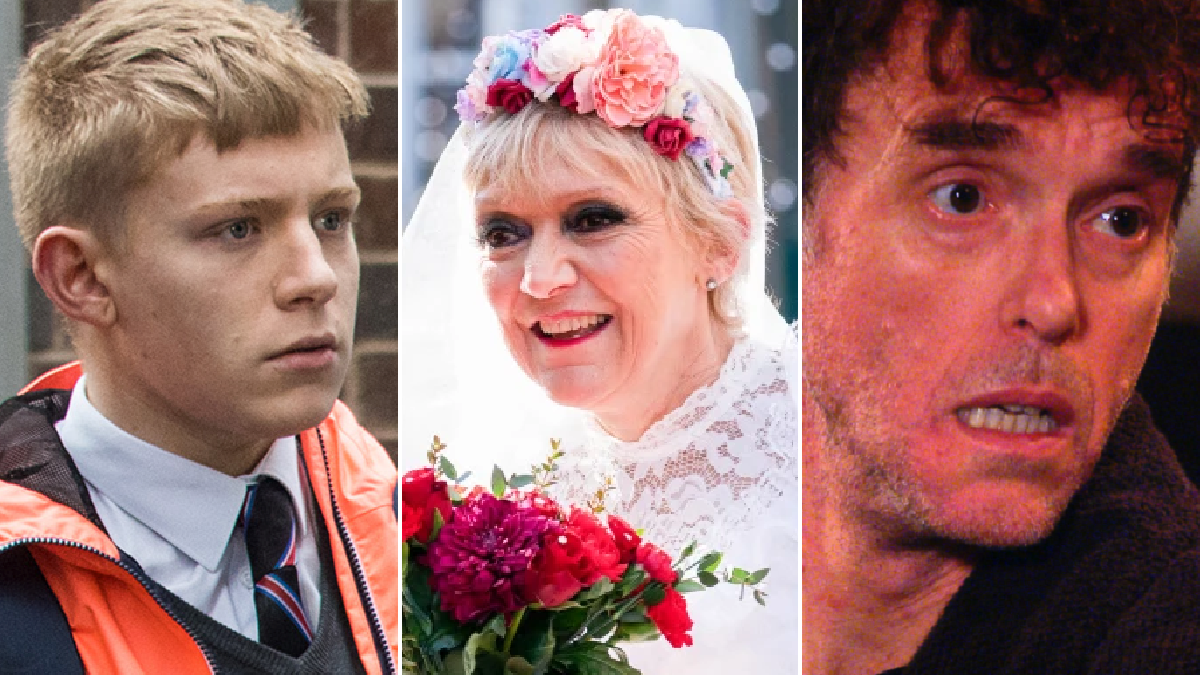 Monday brings with it plenty of drama in the land of soap, and this week is a particularly eventful one for many of our favourite characters, with heartbreak and tragedy on the cards.

Jean Slater tells everyone that she’s getting married in EastEnders, as she sets off for Southend, but given that she and Harvey Monroe aren’t on speaking terms, just what is she planning?

Coronation Street, meanwhile, sees Max Turner left fighting for his life, after he cuts his leg on a piece of broken glass.

Will he be okay?

Over in Emmerdale, Marlon Dingle returns home from the hospital, but there is more heartache ahead, while Hollyoaks sees Olivia Bradshaw’s blackmail scheme slowly start to unravel.

For all this and so much more, Metro.co.uk is serving you up all the latest drama, straight from soapland, below.

With the weight of the world on his shoulders and feeling guilty about Amy, Max falls out with David, who confiscates his phone as punishment. Max claims he hates David, who retaliates by saying that his mum would be ashamed of him if she were alive. Max, determined to run away, smashes the glass on the barber’s door and climbs in, hoping to retrieve his phone, but as he does so, he lacerates his leg on the broken glass in the door and collapses onto the street. Will he be okay?

Jean dons her wedding dress, claiming that she’s getting married today. Stacey is alarmed to learn of this, and enlists Martin’s help to track her down in Southend. Jean, meanwhile, enjoys the sights of Southend as people compliment her dress. Stacey and Martin arrive and manage to track down Jean but they witness her walking towards the ocean. Stacey gives chase and carefully tries to encourage her away from the water. With reality setting in that she’s unwell, Jean resists Stacey’s help but Stacey reaches her mum just in time. Jean will finally get the help she needs.

Marlon returns home in Emmerdale but there is more heartache ahead

Marlon prepares to return home, and when he does so, everyone is thrilled. Rhona, April and Mary start to work out a way of moving forward, and soon there are challenges, as emotions runs high. April is pleased to spend time with her dad, but when she helps him to a drink of water, Marlon starts choking. April is terrified believing he’s having another stroke and calls desperately for Rhona. Upset, April arranges to spend time at a friend’s house, leaving Marlon despairing, as he thinks he should return to hospital to spare his family the stress.

A shocking voicemail from John Paul leaves Olivia on edge as she is forced to cover the tracks of her blackmail as a result. John Paul is too hungover to remember what he found out, but a comment from Prince soon jogs his memory, and thus he exposes what he knows to Sally.

At Toyah’s hen do Leanne tells her that she has her blessing if she is sure she wants to marry Imran and she’ll be by her side.  The sisters hug, each burying their concerns.

Linda returns to work in EastEnders and Janine is NOT happy

Linda is back behind the bar at The Vic and Nancy asks Frankie to keep an eye on her while she pops out. Things get tough for the landlady, however, when Mick returns from his holiday with Ollie and Janine. Can she resist a drink? That remains to be seen. Janine, meanwhile, manipulates Mick, getting into his head about Linda being a potential safeguarding issue for Ollie. After Nancy receives good news, Janine tries to rattle Linda by opening some champagne.

Kim is furious as her staff go on strike in Emmerdale

Kim is left in shock with when she sees her staff on the picket line outside the HOP! Frustrated, she demotes Jai, telling him he will remain demoted until he resolves the situation. With the picket line deterring customers, she then demands Jai gets her staff back inside. Jai’s reaction, however, is not one she expects! Unfortunately, things get worse for Jai as the week progresses.

After receiving some exciting news, Darren steps things up a gear, as he decides on a romantic gesture to make things official. Being spontaneous, he leaves Nancy with little information about what he’s up to – except for a time, place and some rather interesting attire, that is!

George refuses to let Eileen stay at his house, blaming Ridley his over protective cat. He is shocked when he arrives home to find Eileen and Sean snooping round his garden. When Eileen tells him they were checking out his cat story George is furious. Hearing about the trip to George’s house, Todd resolves to get to the bottom of it. Will George come clean about his real reasons for not wanting Eileen to stop over?

Sam has a plan in EastEnders

Sam arrives at the Mitchell household and explains that she’s moving in. Kat, however, is not in the best of form after Ben previously riled her up by telling her she’s not up to being a Mitchell, and thus she throws Sam out, claiming that she’s head of the family now. Sam, meanwhile, is eager to find a place to stay and gets an idea after talking to Ricky in the café. Jack is later conflicted when Ricky misbehaves and threatens to move away with Sam.