When we last left the Downton Abbey crew — various Crawleys, assorted Pelhams, some Talbots, and their lively band of servants — things were looking on the up and up. The king and queen had come to visit and, after a predictably amusing series of mishaps and pratfalls, the stopover had proven to be a massive success. Loves were lost and found again. Matriarchs rose and fell. History was kept close and cherished. The estate didn’t burn down (and, in fact, made a case for its continued use in an increasingly modern world). No one died.

It all made for a charming last hurrah, with the film picking up five years after the beloved television series had ended, giving both fans and newbies a glimpse into how the lives and loves of a sprawling cast of characters were continuing to unfold. And yet, while Michael Engler’s film offered plenty of closure (or, as the case might be, confirmed closure) on a number of stories and subplots, it also seemed to test the waters for still more continued adventures with the Crawleys and co. Is there still life in these bones, basically? The answer is yes, with caveats, many of them on display in Simon Curtis’ fluffy, frothy, occasionally quite moving, and often scattered-feeling followup, “Downton Abbey: A New Era.”

Picking up soon after the end of Engler’s film, “A New Era” opens with plenty of joy: the wedding of Tom Branson (Allen Leech) and Lucy Smith (Tuppence Middleton), who met and wooed during the first film. And yet there are some cracks starting to show — even literally, as in the case of the estate’s crumbling roof — as the Crawleys continue to figure out how they might roll with the changing times, both in terms of wider culture and close family bonds. Series creator Julian Fellowes’ natty script offers two primary outlets for both those concerns, care of a pair of plots that serve to cleverly split the family (for a time) and make exceedingly clear the problems they are currently facing. 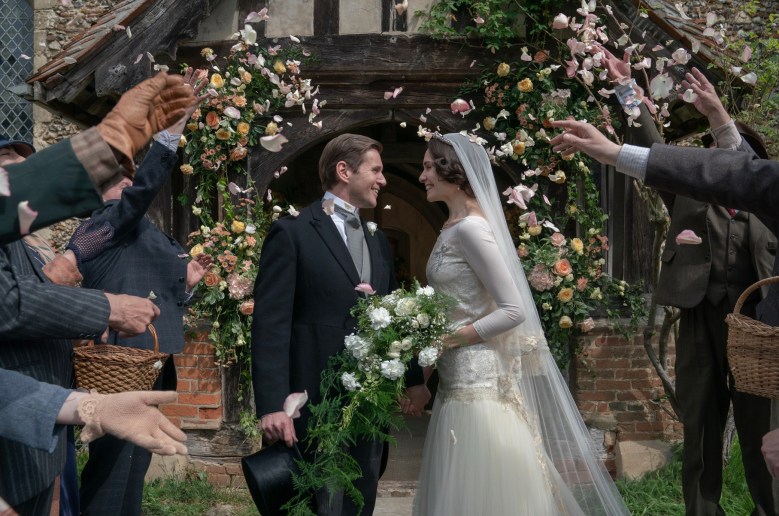 First up: a movie wants to film at Downton, an idea that is both hideous (imagine all those film people tromping around the place) and very appealing (the offered fee could more than fix the roof). And that’s not all, because while Lady Mary (Michelle Dockery), her iron-willed grandmother Violet (Maggie Smith), and her relatively easy-going father Robert (Hugh Bonneville) are busy debating the value of such a scheme, yet another upheaval is on the way.

Fans of the series have long known that young Violet was something of a dish, and while her marriage might not have been the happiest, she stuck with it in the face of many other appealing offers. Turns out, it wasn’t just a young Russian prince who was sweet on Violet back in the day — there was also a handsome French marquis, who bequeathed her a sprawling villa in the South of France many years ago. The marquis has now passed away, and Violet needs to take possession of the joint — where the two apparently spent one very special week, decades ago — which she announces she will pass on to young Sybbie (Fifi Hart), her one grandchild who does not already have a massive property in her name.

It’s clear from the start that half the Crawleys and their loyal servants will decamp for the French villa (to meet its deeply upset current matron, who doesn’t get why her husband was so damn obsessed with some English lady, plus her son, who is only too happy to carry out his father’s wishes, for reasons the film will eventually explore), while the other half will remain on the estate to deal with the shooting of the seemingly ill-fated silent feature “The Gambler.” Still, Fellowes’ script takes its sweet time getting to that division (we’re nearly 40 minutes into the 120-minute film before we lay eyes on either the French Riviera or a film camera), and even after the clan has been bisected, a choppy, episodic feeling never quite abates. 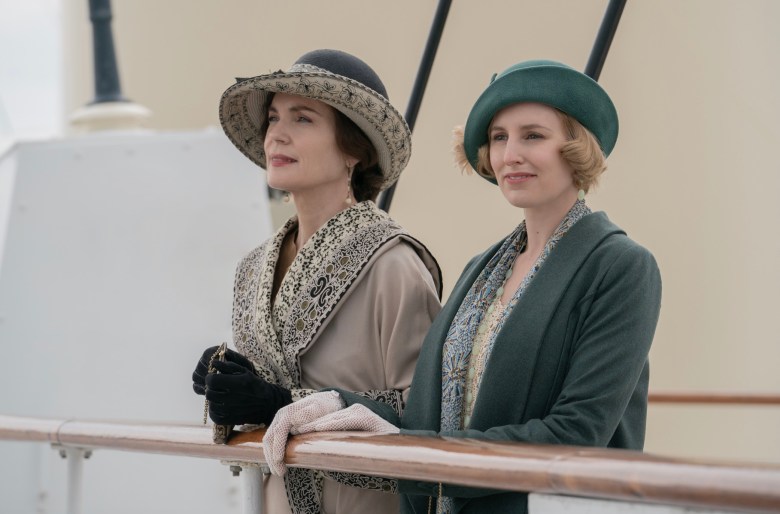 And neither do the subplots! Like its predecessor, Curtis’ film is chock-a-block with comings and goings, dramas and trials, joys and romances, care of an outsized cast of characters, nearly all of whom have returned to their TV roles (save for Matthew Goode who, after a small role in the first film, doesn’t show up in this outing, leading to yet another subplot meant to paper over his absence). While both the movie shoot and the French villa plots offer up plenty of intrigue — from a mean silver screen star (Laura Haddock), an alluring leading man (Dominic West), and a very sweet director (Hugh Dancy) to the fraught soap opera playing out over Sybbie’s big gift — “Downton Abbey: A New Era” layers on still more stories to untangle.

There are health issues to ponder, looming deaths to consider, plus a metric ton of unrequited romances to deal with. Downstairs, Butler Barrow (Robert James-Collier) is faced with a new choice after a short-lived romance in the first film, while newlyweds Andy (Matthew Fox) and Daisy (Sophie McShera) are struggling to make their new home theirs, and Mrs. Patmore (Lesley Nicol) is wondering about taking a chance on an old flame. Upstairs: Mary and Henry’s (Goode) marriage seems to have reached a tipping point (again, all the tougher to handle with Goode MIA), Lady Edith (Laura Carmichael) is considering getting back into journalism, and Lady Cora (Elizabeth McGovern) appears to be concealing a massive secret.

It’s soapy and complicated and fraught, and even long-time fans might benefit from bringing along an annotated family tree to the theater (though a pre-movie catch-up video, embedded above, certainly does help remind viewers of the high points of the last film). But that’s classic “Downton,” and if nothing else, Curtis’ film treats each and every plot and character with affection and respect. That’s no small feat, especially when this burgeoning film series seems intent on continuing to mine the series for more material. Somehow, even with that mandate in effect, “A New Era” doesn’t feel like a cash-grab, but a true continuation. Lush settings, well-appointed sets, and an eye-popping wardrobe only add to the magic, and good luck not happily sinking into two hours of confectionary entertainment. (The endless jokes about the film industry somehow only add to the zip of it all.)

For all is frothiness, the film is not shy about grappling with some major moral questions, as many of its characters are forced to deal with nothing less than unpacking what is right and what is wrong, how those very labels are evolving, and where they want to fall in regards to them. Those are old questions, surely, but that’s the charm of “Downton Abbey” and its many (many) inhabitants, who are tasked with approaching common issues with grace, pluck, and optimism, the same traits that make “A New Era” such an airy treat.

Focus Features will release “Downton Abbey: A New Era” in theaters on Friday, May 20.