There are a bunch of Very Plot-Significant developments that take place in this week’s Evil. And we’ll get to them in a moment. But man, I cannot stop thinking about the baby demon that Kristen nurses during a nightmare sequence halfway through the hour.

It is a thing of horrifying beauty! The cornfield baby in Season 1 was more gross, to be sure. But something about this infernal infant — its crab-like arms, maybe? its chilling-yet-plaintive cries? its totally normal diaper? — makes it super disturbing! And that’s before Kristen pulls aside the neck of her t-shirt and places the child at her breast.

But back to the Big Plot Stuff: David and Kristen exchange “I love yous,” but not like that. Lexis meets The Manager. And Grace is free! And home! Read on for the highlights of “The Demon of Parenthood.”

GIMME, GIMME, GIMME THE HONKYTONK CLUES | Victor LeConte slips into David’s confessional and whispers that the monsignor is going to ask him to assess a special case in the near future, and that the word “honkytonk” will come up in conversation during the assessment. (Side note: Brian d’Arcy James saying “honkytonk” is :chef’s kiss:.) When David hears the word, he is to count to the 12th word that follows it in the conversation and then report that word to LeConte. It’s so preposterous that David immediately replies, “This is all a game to you, isn’t it?” But Victor’s not joking. He says it IS a game, a serious one, “and one we have to play to protect the holy.” 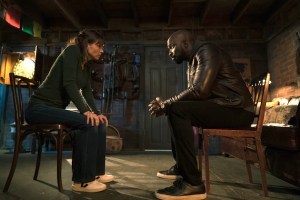 Meanwhile, Kristen has a night terror in which George and Lexis hang out, make flossing dance videos and post them on Vidtap. When she wakes up, highly disturbed, she calls David, who comes right over. In her office, they discuss what Victor told her in the last episode: That everything that has happened to Kristen and her family in the past two years has been by diabolic design, and she wonders if David’s request that she join the assessing team was also part of that plan. He steadfastly reminds her that he tells her the truth, but she calls BS: After all, he lied to her about working for The Entity. Chagrined, David offers to tell her everything he knows about RSM Fertility and Lexis, but she’s not appeased. She won’t quit, she tells him, because “I need the money. But I feel pretty f—ked-over, and it’s going to take me a while to adjust to that.”

TOYS ‘R’ EVIL? | That assessment Victor mentioned turns out to be at a toy store where a bunch of the goods for sale are suddenly displaying violent or foreboding messages: Magic 8-type balls that say “Help me, I’m in Hell” and fairy wands that proclaim “See you in Hell!” The word “honkytonk” comes up while Ben, David and Kristen talk to the shopkeeper; David later dutifully repeats the 12th word after it (“matters”) to LeConte, while Ben investigates what looks like blood and a severed human finger inside one of the fortune-telling balls. LeConte is happy to hear David’s report, hinting that the word indicates that Grace is alive in China. 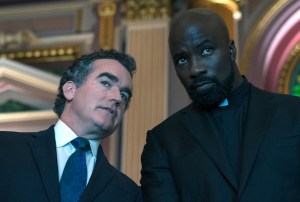 But later, when called to another assessment, the word “honkytonk” comes up again, with a different 12th word (“ignore”) after it. LeConte is not pleased to hear David’s update, and refuses to pass it along, reminding David that he is an intermediary, and the group they serve was satisfied with the first bit of reconnaissance. But David can’t let it lie, so he goes back to the man who mentioned the second honkytonk; the man says that if they don’t believe his message, Grace won’t survive. He implores David to pass along this phrase: “Talk to Lau, not Xi.” So he does, and soon an irked LeConte is summoning him to a chapel on Lexington Avenue.

There are a lot of priests and men in suits in the basement of the building, and they’re having a very important-looking Zoom meeting with a bunch of very important-looking men. If I’m understanding correctly, the Vatican is in the process of bargaining with China: They’ll trade two priests for Grace’s release maybe? But after David passes along his new intel, the head negotiator informs Mr. Xi (one of the men on the screen) that he now understands that Mr. Lau (another man on the screen) is the person who actually has the power to broker the deal. LeConte, now happy, assures David they’ll find out where Grace is, and sends him home.

Later, after Ben ascertains that the seemingly demonic messages were actually information being smuggled out of the Chinese labor camp where the toys were made (and the finger was just an unfortunate accident), David tells him to say nothing, lest they put the operation in danger. And at the end of the hour, David returns to the rectory to find Grace there. She thanks him for helping with her release, and they hug. “God knows what you did, and God knows what you’ll do,” she says.

In another important exchange related to all of this, David is simultaneously sad that his relationship with Kristen has taken a hit and steeled that he is serving the greater good — even though those two things are often at odds. “I don’t want to disappoint you or myself. But I do believe in something that goes beyond both of us,” he tells her, slightly apologetically. “I care for you more than anyone I know. But when God demands something of me, I have to obey.”  Kristen is sad, too. “I wish I understood,” she says, adding that she loves him as a friend and someone she respects, and there’s definitely more there but she pulls herself up short before she can elaborate. And when they part, there’s still a lot of hurt feelings, but maybe a little of the sting has been removed from the situation? 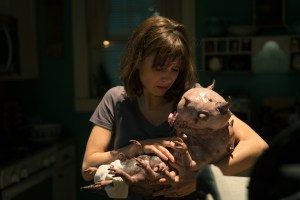 LEGGO MY EGGO | In another nightmare, Kristen creeps downstairs at night to find a hellish, diapered (ha!) demon baby crying in a car seat left on top of the butcher block in her kitchen. Though she’s repulsed, her worry for the kid seems to trump her fear, and she picks the child up and starts to breastfeed it, rocking it gently while she does so.

During her waking hours, Kristen’s lawyer calls with news: They’ve gotten a judge’s summary judgment that will force RSM Fertility to figure out what happened to Kristen’s missing egg. Eventually, we learn that it was donated to medical research and wound up with a couple, who fertilized and implanted it. The woman, Valerie, is due to give birth very soon; the baby is a girl and they’re planning to name her Sarah. Valerie and her husband, Logan, want Kristen to be part of the baby’s life, and Kristen tearfully agrees.

But Logan pulls Kristen aside to tell her that Valerie’s had a really tough pregnancy, and he’s worried about the baby; the heartbeat sounds, to him, like a growl. Kristen chalks it up to the anxiety that accompanies impending parenthood. Later, Valerie confesses that she’s had dreams of not being able to rescue her baby from a fire. Again, Kristen says it’s all normal.

But later, Logan calls and tells Kristen that Valerie is in trouble and refusing to see anyone but Kristen. And when Kristen arrives at the house, she finds Logan covered in blood and holding a bloody hand rake from the garden. “I was trying to save her,” he says flatly. “I had to cut it out. It was killing her.”And when Kristen runs up to the nursery, she sees blood EVERYWHERE, and the sight of Valerie’s lifeless body literally brings Kristen to her knees. 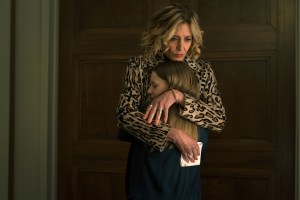 AMBASSADOR TO WHERE? | Is anyone else disappointed to see Dr. Boggs so easily get sucked in by Leland? After the doc witnesses what he believes is “possession therapy,” he agrees to invite an otherworldly being into his body — with the caveat that he will then repeal the foul intruder and have plenty to write about in his book. And it seems to work, with Boggs typing maniacally after the ritual, and the “boop!” demon reappearing to him in the turntable toy.

Meanwhile, Sheryl brings Lexis to work to meet The Manager. It all goes very well — so well that Sheryl suspects that her granddaughter isn’t seeing what she’s seeing. Immediately after they leave his office, she asks Lexis how many eyes the boss has. “Two,” the girl replies, puzzled. “Why?” Leland later tells Sheryl that they’ll keep trying to bring Lexis’ demonic side to light. And after all, “If she’s not the one, she’s the ambassador.” Hmm…

Now it’s your turn. What did you think of the episode? Sound off in the comments!