Ever since she was a child, Frankie thought her father died in an alley under suspicious circumstances. But in what turned out to be Ovation TV’s series finale of Frankie Drake Mysteries, the ace private detective finally learned the truth.

The revelation began on Saturday’s installment when Jack, Frankie’s younger half-brother, appeared at her office with a newspaper article that featured a man who looked a lot like their dearly departed dad — except very much alive. Confused by the news, Frankie reached out to one of the witnesses who said he saw Ned Drake get murdered. Sadly, the man admitted to Frankie he lied to the police to help Ned stage his own death because Ned paid him to do so.

A shocked and slightly heartbroken Frankie then visited an old friend of Ned’s named Desmond, and he said he thought Ned was dead, too. Something about his vibe made Frankie suspicious, and when she learned Desmond and her father were a part of a shady and thieving secret society known as the Brothers of the Crooked Dagger, she decided to crash one of their meetings to get to the truth.

While there, she heard Desmond announce they needed to kill Ned because he could expose their secrets. Just as Frankie was about to run off and keep looking for her father, he snuck up on her and said he’d tell her everything once they got out of the Brothers’ hidden lair.

Ned apologized for deserting Frankie and Jack, but said he was back to steal a very valuable telescope from the brotherhood that once belonged to Sir Francis Drake because Desmond used his old plans to steal it. Ned said he needed Frankie and Jack to help him find two more Crooked Dagger brotherhood rings, and then he’d nab the telescope and split. 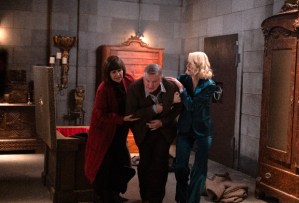 Frankie and Jack set out to do just that, but Jack got arrested in the process. Meanwhile, Frankie’s mom Nora and Ned rekindled their spark while Frankie and Jack were away. Ned, Nora and Frankie then figured out a way into the lair, and Ned used the rings to help him steal the telescope. But when he attempted to save Frankie from the bad guys, Desmond stabbed him before they could escape.

It seemed like Jack had come to their rescue, but he snatched the telescope and said he needed the money for his wife and son. Nora was horrified by Jack’s selfishness, but Ned and Frankie just laughed about how much of a mess the Drake family really is.

Ned said he was proud Frankie turned out so well, and he once again apologized for not being there for her. He explained one of the reasons he left was because he thought Frankie would be better off without him. Sadly, Ned really did die this time, and once again, Frankie was devastated. She couldn’t turn to Sandro because he’d already left for Europe, so she ran to the arms of Sebastian, and for a moment, it seemed like they could be more than just friends. 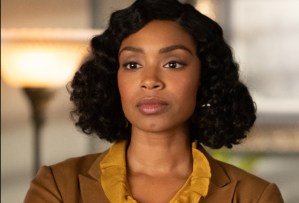 Before they could get too cozy, the pair heard an ominous  gunshot. However, it was unclear if Trudy had fallen victim to those shady insurance types she had started working for, or if she had bested the fake doctor lady.

Elsewhere in the finale, Flo took custody of her niece, and Mary took down a couple of corrupt Toronto police detectives, but at what cost? Unless there’s a follow-up movie of some sort — hint hint, CBC and Ovation TV — fans will never know how this story ends and if Trudy survived.

What did you think of the series finale? And are you hoping the series will find a new home or at least land a TV movie that could give a sense of closure? Grade the finale in our poll, and drop your thoughts in the comments.