Author JK Rowling, 55, has sparked a row on social media over a killer in her latest book as reviews have stated the male character dons the persona of a woman to murder their victims. This has caused a backlash from some members of the LGBTQI+ community for ”smearing” transgender people, despite the critics who have read the book explaining there is only one particular point where the protagonist puts on a wig to adopt the identity of a woman. Piers Morgan, 55, spoke with a panel of guests on Good Morning Britain, which included George Galloway, 66, and journalist Benjamin Butter, with the latter fiercely opposing the author’s newest project. However, the ITV host and George couldn’t understand where the uproar had come from if the guest hadn’t even read the book.

Benjamin said: “JK has been tweeting derogatory comments about trans people for some years now and her new book reportedly features a character who dresses as a woman in order to kill.

“A lot of people, myself included, are incredibly worried about how that smears transpeople,” he continued, before Susanna Reid, 49, clarified the character in the book was rather a transvestite than a transperson.

The guest added: “In a lot of people’s minds who are not familiar with the distinctions of trans people with these issues and may have seen JK’s other derogatory comments – this will be seen as a way to debase them.

“This will be seen as an insult to all transpeople – the idea we should be afraid or nervous,” he explained, before Piers jumped in.

The host questioned the journalist several times whether he had actually read the book, hitting back: “You’re telling people not to read a book you haven’t read.” 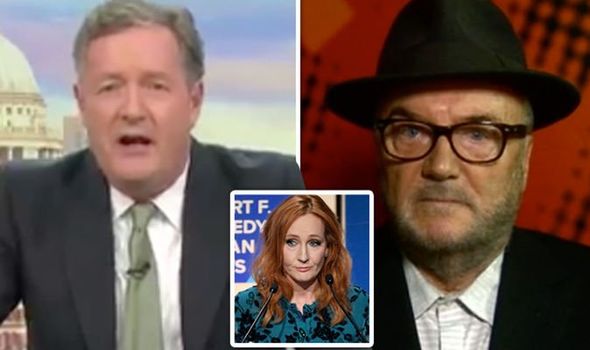 The presenter said he had read a review by Nick Cohen and the idea it would portray the trans-community in a negative manner was “based on a complete load of nonsense.”

Bringing George into the debate, the politician remarked the debate would send the book to the top of the best-seller’s list.

With the hashtag of ‘RIP JK Rowling’ trending on social media, the latter stated it was the opposition which had “deeply psychiatric” issues for ripping into the author.