Louis has been left thrown by the arrival of Simone’s sister Martine, who he has secretly tied the knot with during his time away from Chester.

Fans always knew that Martine – played by former Eternal singer Kelle Bryan – would be turning up with a bombshell, but her connection to Louis had been kept a closely-guarded secret.

To make matters more complicated, Louis has also rekindled his passion with his ex-wife Simone this week – meaning he has all the more reason to want to keep his marriage under wraps. 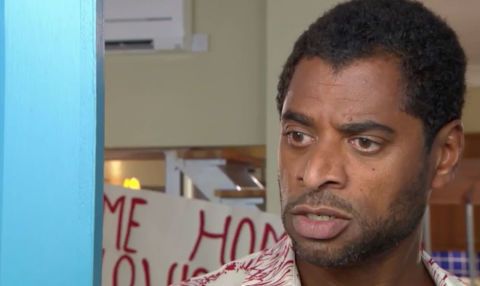 However, Thursday’s first look scenes will see Louis’ worlds collide when Simone comes to blows with Martine over her quick-fire nuptials.

Horrified that her sister has tied the knot with ‘a stranger she met on the plane’, Simone makes her feelings known during a furious showdown with Martine.

The spoiler clip above shows Louis turning up amid the pair’s row, but he’s left panic-stricken when Martine threatens to show Simone pictures of the ceremony. Is the truth about to come out? And where does all of this leave poor Leela as well?

Digital Spy Soap Scoop video – hit play below for all the latest Hollyoaks spoilers, as Glenn’s enemies plan revenge and Kim prepares to leave the village.