The 50-year-old star hosts the creepy crawly series Down Under and her popularity soared when Alan Carr and Nick Grimshaw re-tweeted her hilarious one-liners. An internet campaign to bump her up to the UK version has now exploded.

She said she'd jump at the chance to make Brits laugh on screen.

Speaking on Good Morning Britain today, she told Kate Garraway: "I'd takle the job in a heartbeat, I'm a huge fan of the (UK) show, and I lived in the UK for seven years.

"When I came home and heard they were doing an Australian version, I fought for that job." 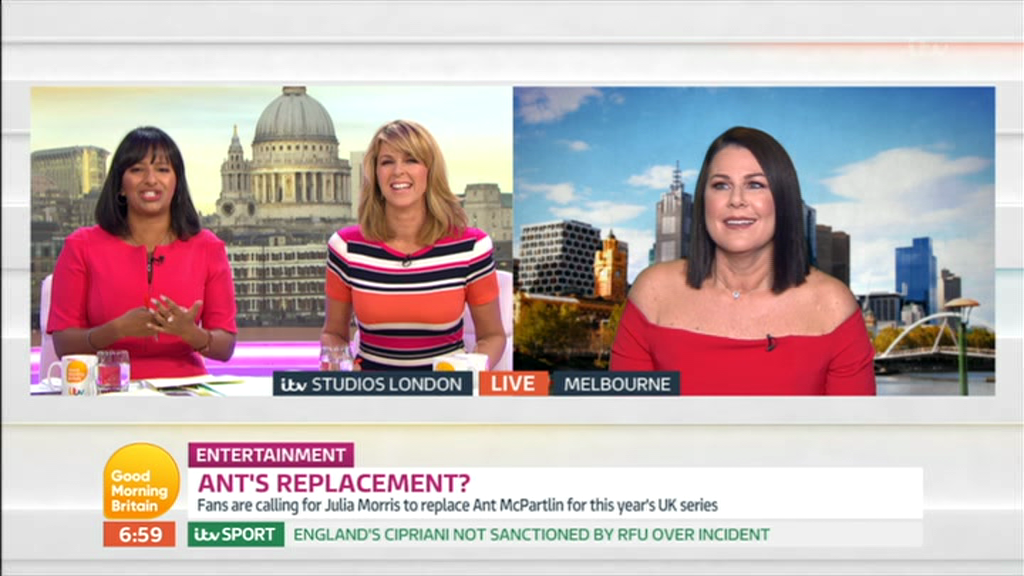 Julia found fame on reality TV and has gone on to be hugely successful in Australia.

She added: "I call myself queen of the jungle but no, I won the Celebrity Apprentice out here.

Kate admitted she hasn't met Declan Donnelly yet but she'd love to pitch her qualities to ITV. Asked has she met Dec, she replied: "I'm not convinced we have crossed paths but I am a long standing fan.

"I'm not going to bring what Ant can bring, no one can bring the magic Ant can.

"I'd bring something new and interesting and slightly over week."

Fans were obsessed when Julia's one liners like "I'm a human body double for Kylie Minogue" and "super shy but pushing through it" went viral on Twitter.

Nick Grimshaw wrote on the social media site: "fly her first class to the uk now to host everything"

Another fan wrote: "If Ants not doing I’m a celeb this year can we please have Julia Morris?"