Home » TV & Movies » 'It's a personal thing': Ed Sheeran gets candid on hits, not missus, in doco Songwriter

How do you get the notoriously private Ed Sheeran to commit to a feature-length, behind-the-scenes documentary? Keep him in the dark.

"I didn't know it was being made," the musician says over the phone from Los Angeles.

"Murray [Cummings; the film's director and, conveniently, Sheeran's closest cousin] was always with me on tour just filming stuff… I only saw it when it was done. I think I had two notes for things to take out."

Those editing notes? To remove some "personal stuff", and a new song he plans on debuting on his next album.

"Other than that, it's his thing, you know?" 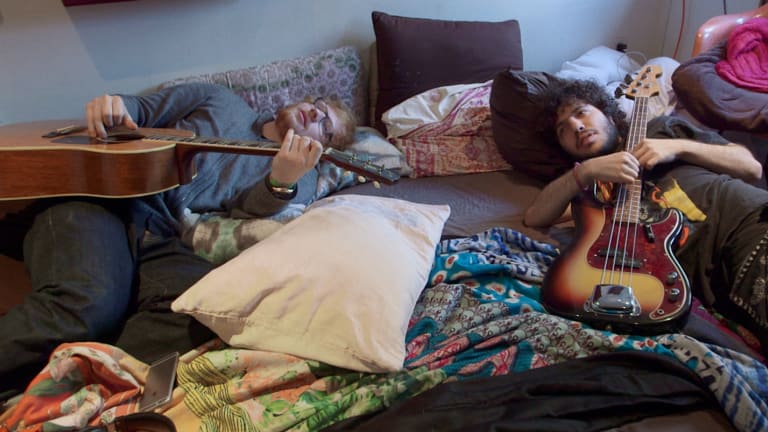 Songwriter, released overnight on Apple Music, follows the 27-year-old Shape of You singer from around 2008 to the 2017 release of his Grammy-winning, chart-breaking album Divide.

Unlike recent warts-and-all docos from global music stars – say, Katy Perry's Part of Me, which followed her on tour amid her imploding marriage to Russell Brand, or Lady Gaga's Netflix special Five Foot Two, which looked to rebrand the pop star as a tortured artist – it stays focused on craft over lifestyle.

"I feel like people thought that this documentary would be that… I don't think I'm there yet,” says Sheeran.

"I don't think you can have a tell-all documentary about a career that's only been seven years. There's going to be so much more that happens that is far more interesting." 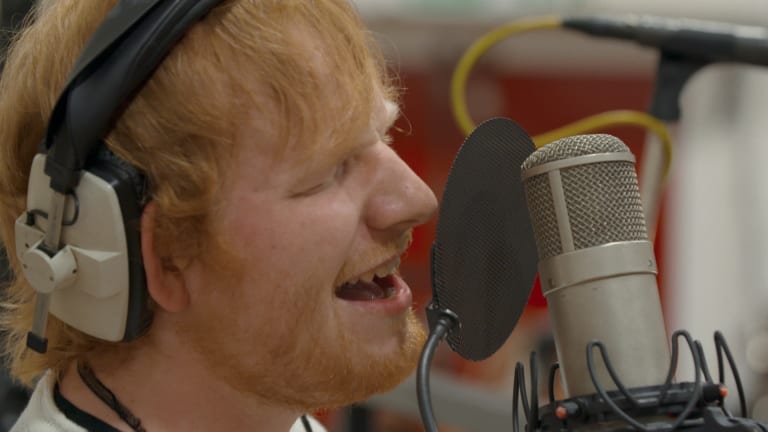 Sheeran pulls back the curtain on his hit-making process in Songwriter.

Surely label execs and filmmakers have floated the idea of his tell-all, one of those glossy behind-the-scenes looks that can reset popstar narratives, especially a persona as frumpy as Sheeran's?

"Yeah, they have," says Sheeran. "But what benefit to me is it to let someone into my private life? It's not going to help me out… I don't need to do that.

"My favourite music documentary is Fade to Black," the 2004 film on rapper Jay-Z, he says.

"There's a bit in it where he and Timbaland are trying to find a beat that works and suddenly Dirt Off Your Shoulder happens and you see the song being created. I thought it was such a cool thing, so to have a whole documentary dedicated to that is a bit different."

While there are glimpses of Sheeran cuddling up to fianceé Cherry Seaborn – "You don't want to be too shut off," he says about allowing fans into his private life, although he bristles when asked for a wedding update ("It's a personal thing, man… Let them figure it out themselves") – the doco is more a snapshot of the creative negotiations that take place as the artist works: the inspired impulses, laboured collaborations, vulnerable introductions.

In one scene, Sheeran cops a sly grilling from producer Benny Blanco for getting a little R-rated while testing ideas for a notorious kiss-off he'll later pass on to Justin Bieber to turn into a radio hit.

"If you like the way you look so much, you should go and f— yourself," he sings in the back of a tour van.

"Too much," the producer says, shaking his head.

Another scene, showing Sheeran and bandmates working up to what eventually becomes Galway Girl ("You’re my pretty little… Derry girl?" Sheeran initially sings), captures the electricity of creating a megahit.

"I've gotta be honest, I never know what's a hit and what's not, I just don't have a good read on it," Sheeran says about the moment captured in Cummings' footage.

"All I know is what makes me excited in that moment. And it always happens within the first five minutes, like a spark happens."

While Cummings is no longer Sheeran's official archivist, the singer is still hoarding footage, including the current sessions for his next album, which he says is already "way better than Divide" – a big call considering that album won a Grammy and shipped over six million copies.

"I have my best mate Nick from school, a guy that I grew up with, he's filming everything now," says Sheeran.

"It's just good to have it. My idea is to have it all stockpiled and then when the time comes to do that big documentary, you've got all that shit to go through."

Songwriter is available to stream now on Apple Music.