Home » TV & Movies » Jimmy Kimmel sobs as he pays tribute to Bob Saget: ‘He was the sweetest man’

Jimmy Kimmel has paid emotional tribute to the late Bob Saget on his show, describing his friend as ‘the sweetest man’ and recalling how he would ‘write sometimes just to tell me he loved me’.

On Sunday, Saget died suddenly at the age of 65, having been found in his hotel room in Orlando, Florida. A statement from police outlined that there were no signs of foul play or drug use.

The death of the comedian, best-known for starring in sitcom Full House as Danny Tanner, has left Hollywood in shock, with his close friend John Stamos tweeting: ‘I am broken. I am gutted. I am in complete and utter shock. I will never ever have another friend like him. I love you so much Bobby.’

During the latest episode of Jimmy Kimmel Live!, the host took a moment before the start of the show when the audience hadn’t arrived yet to pay homage to Saget, saying: ‘If you read anything about Bob online last night, if you saw any of the many thoughts from people who knew him personally, a word that came up a lot was the sweetest.’

Kimmel’s voice cracked and he broke down in tears as he continued to speak about his dear friend, stating: ‘Bob was the sweetest. He was the sweetest man, and the reason people wrote that is because it’s true. It’s the best word, if you had to pick one word to describe him, that was it – the sweetest.’

The TV presenter recollected frequently receiving ‘wonderfully kind and supportive texts, emails and calls from Bob’, who ‘always had a compliment’ to give and would tell several people in his life that he ‘loved’ them on a regular basis. 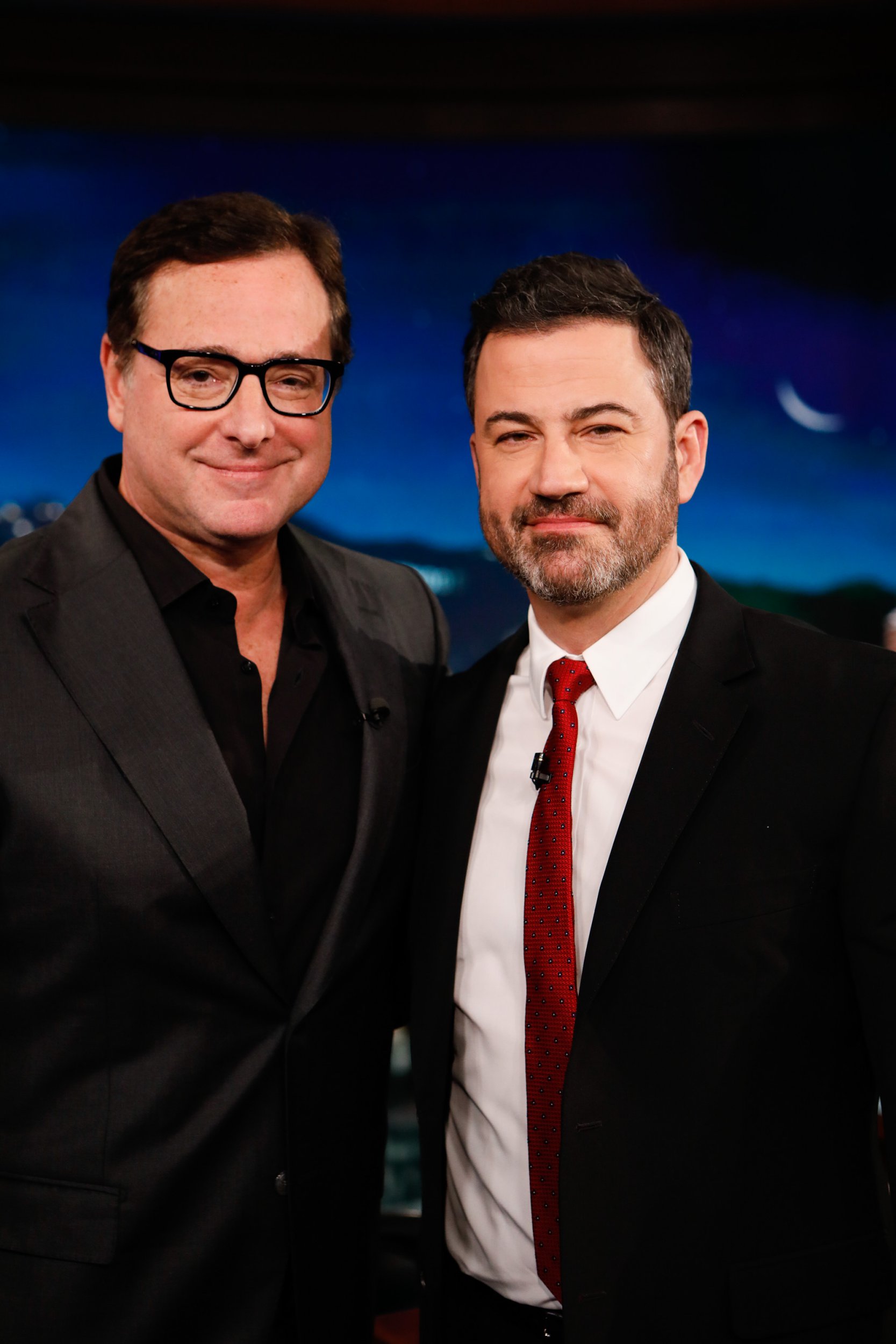 Kimmel said that Saget never had anything ‘bad to say about anyone’, adding: ‘If there were people he didn’t like, he kept it to himself. Unlike me, he was a good person.’

In 1985, Saget experienced the loss of his sister Andrea after she suffered a brain aneurysm, and then in 1994, his sister Gay died after being diagnosed with a disease called scleroderma.

Kimmel outlined how Saget had just so happened to have been doing fundraisers to fight the rare condition three years before his sister’s diagnosis, going on to join the board of directors for the Scleroderma Research Foundation, as the TV host urged people to donate to the organisation in the comedian’s memory.

Following the news of Saget’s death, Kimmel took a look at emails he had exchanged with him, some of which ‘were just funny’ and others that were ‘serious emails about life and the wellbeing of our children and how hard it is to appreciate one of those without the other being just right’.

‘In one email we’re talking about our kids, and I have it here, he wrote: “One night soon let’s go out and have some meat and some good damn drinks and talk about how lucky we are that we have them.” And we did do that many times,’ he said.

‘When my son was in the hospital, Bob checked in a lot, so I want to send love to his daughters, to his wife Kelly and to his friends who loved him so much. He was very kind to everyone and he had no problem telling you that he loved you and what you meant to him.’

At the end of Kimmel’s monologue, he showed a clip of himself speaking with Saget and Stamos following the death of their mutual friend Don Rickles in 2017.

Explaining that Saget and Stamos ‘were beyond friends, they were brothers, they are brothers’, he added: ‘We never imagined that four and a half years later, we’d be talking about…’ as he broke down in tears.

‘I’m sorry I taped this like 14 times and I just…’ Kimmel said as he tried to continue.

In the clip, Kimmel remarked to Saget and Stamos that they were ‘going to be like the old guys on The Muppets’ one day, as Saget replied: ‘I hope that happens.’

The presenter ended his tribute by saying: ‘We love you Bob.’

Jimmy Kimmel Live! airs on ABC in the US.