Garraway, 54, was joined by Ranvir Singh, 43, to grill Shapps, 52, about a whole manner of topical issues, including the latest developments in the pandemic. However, another conversation on the table in the Good Morning Britain interview was whether railways in the UK were going to be privatised in an overhaul of the current transport sector. However, when the Government’s Transport Secretary explained the Conservatives take was similar to Labours, the presenter made no secret how shocked she was to realise this.

The plans to change the train network were unveiled on Wednesday evening in an attempt to make the system simpler in light of the impact of the pandemic.

This hopes to make the structure and timetables more organised and increase passenger numbers to encourage people to travel.

Asked about this on the show, Shapps said: “There is this blame culture of working out when a train is late, there are 400 people employed and working out what to do with it.”

Garraway replied as she shamed the politician: “I can’t believe a Tory minister is saying this as if you’ve reinvented the wheel.

“You’re describing exactly what Labour said about why it should be nationalised,” she continued to which the Transport Secretary tried to defend his viewpoint. 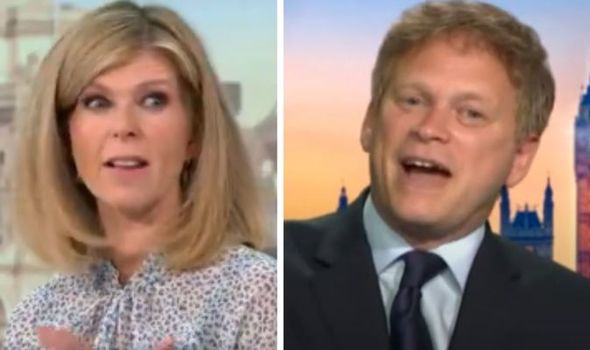 Shapps replied: “I just want the services to run. I don’t really care [how they are run],” but the presenter interrupted.

“That’s all anyone has ever wanted, affordable services that run on time, that’s how the politicians have described the solutions to it,” she said.

The politician added: “I’m pleased I’m here to give you a refreshingly simple answer. I don’t care how it’s run.”

I can’t believe it

“I just want it to run on time as a commuter. I like the trains to turn up when they’re supposed to,” he said.

“What Labour are calling for is it to go back to the old system which saw a decline in the number of passengers,” Shapps explained as he tried to separate the Conservatives’ plans from the opposition’s viewpoint.