[Editor’s note: The following article contains some spoilers for “Last Night in Soho.”]

It was the twist that got Krysty Wilson-Cairns. For her second feature film, the Oscar-nominated “1917” screenwriter again embraced a creatively challenging collaboration to bring a vivid story to the big screen, but it all started with one clever (if divisive) idea from director and co-writer Edgar Wright.

Wright’s film, which he wrote alongside Wilson-Cairns from his own original idea, follows bright-eyed young fashion student Ellie (Thomasin McKenzie) after she moves to London and starts routinely slipping through time, right back to the Swinging Sixties, an era that’s long been the source of her adoration. While on her nightly jaunts back to the Soho of yore, Ellie becomes fixated on Sandie (Anya Taylor-Joy), an aspiring singer who seems to embody the ideal ’60s lifestyle.

Then, the aforementioned twist: After a dreamy opening act that sees Ellie spending time in a nostalgic ’60s wonderland, Wright and Wilson-Cairns pull the rug out. Sandie is not at all what it seems, and as Ellie learns more about what life was reallylike for women in what always sounded like an empowered era, she’s plunged into a nightmare that will only end once she cracks open the mystery of how it connects with her present-day London life. That includes facing down a villain from both sides of the timeline.

The Scottish screenwriter loved that. “That original twist was always there, and that was, for me, the key idea to the female empowerment,” Wilson-Cairns said during a recent Zoom interview with IndieWire. “I had never seen a villain like that before. I’d never seen a villain where I don’t agree with what she does, but I empathize with what she does. That was such a crucial element that hooked me in. I think without that twist, I might not have been as interested in the film.”

The film’s first act delights in lavishing on all sorts of era-appropriate fun and finery: In a dream state, Ellie visits the luxe Café de Paris, where she meets Sandie and the dashing Jack (Matt Smith), an adventure she literally doesn’t want to wake up from. However, there are early hints of what’s to come, which became a key part of the writing process. 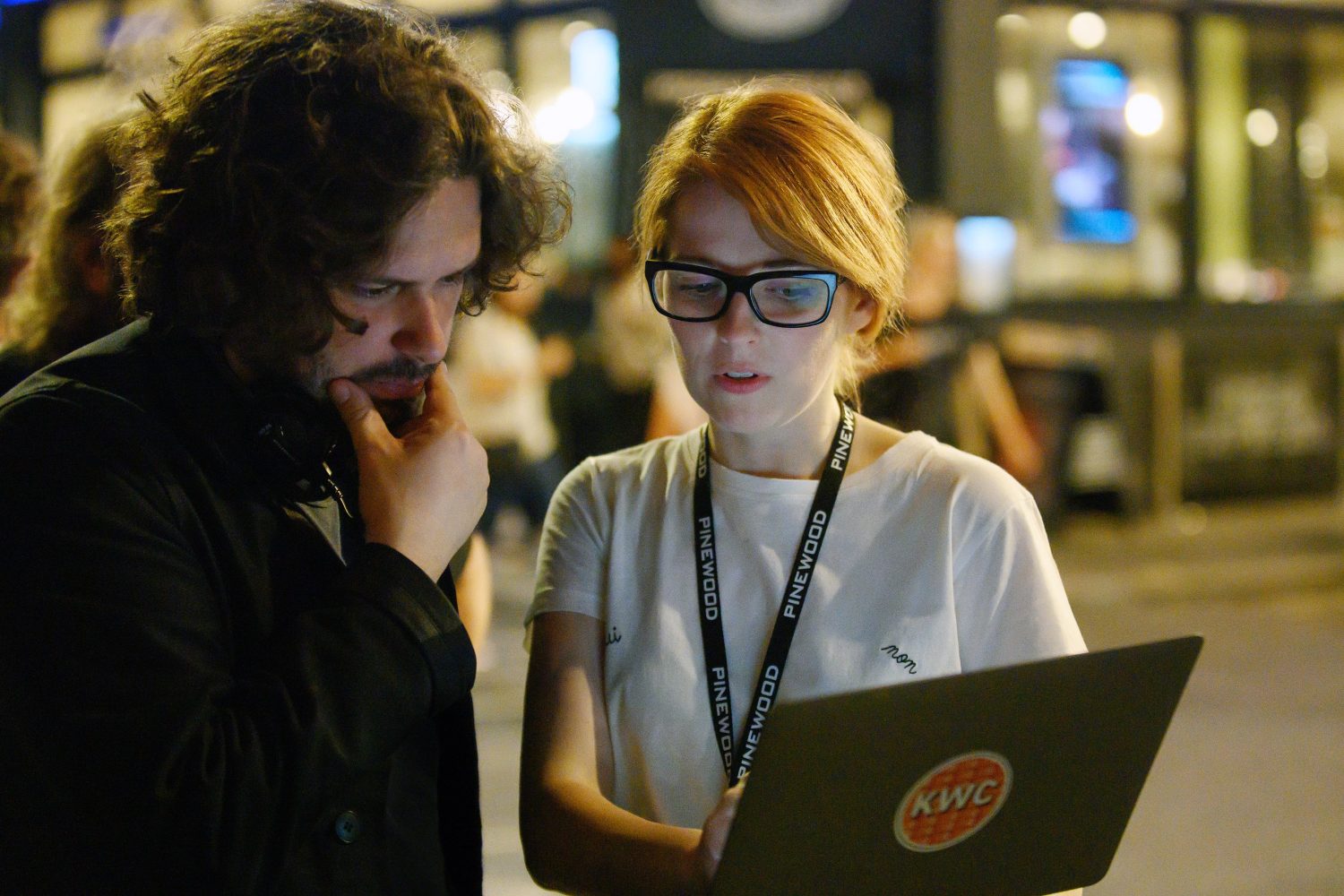 “There’s some red flags there!,” she said. “But it’s subtle enough, and you’re swept up enough in this idea of ‘Wow, this is a dream.’ And then we completely and utterly turn that that on their head, and we’re like, ‘Oh, you thought this was going to be a lovely trip down Memory Lane? Surprise. It’s not.’ And then it only gets much darker from there.”

Nostalgia may be the real villain of “Last Night in Soho,” but it’s also helped Wilson-Cairns get to where she is now. It’s easy to see why she bonded so easily with Wright: They’re both cinephiles from way back.

“My first and most enduring love is film,” she said. “I used to sit in front of the TV all morning. Because I grew up in Glasgow, it rains all the time there, you don’t get out much. And my grandparents loved the cinema. We used to go to movies once a week.” Wilson-Cairns was steeped in all sorts of films early on, including a “really traumatizing” watch of “Silence of the Lambs” when she was just nine or 10, plus an early obsession with the “Police Academy” films (“Mission to Moscow” was her favorite, and yes, she knows that’s weird).

“We were a film family, but I had no idea that you could actually work in film,” she said. “I just thought they appeared on TV, and it was magical, and I was very, very supportive of them, but had no concept of a writer or director or even actors. … I very much understand [how] not watching suitable stuff has probably warped me into an okay writer.”

The summer she was 14 years old, Wilson-Cairns happened to walk by a production of the series “Taggart,” which shot in her native Glasgow. “I wandered in, because this was back in the day when they didn’t have much security,” she said. “I just started asking questions. ‘What’s this, who’s this, why do they do this?’ They just let me hang around, and they let me come back every day.”

Eventually, they hired the young film fan for small tasks on the series — she’d be an insurance liability otherwise, they reasoned — and she spent the rest of the summer getting “really terrible cups of tea and coffee” for cast and crew.

While Wilson-Cairns, who also has a self-professed “weird math brain,” expected to attend university to study physics, that summer stayed with her and altered her entire life. “I remember saying to my mom, ‘I think I want to work in TV,’ and she was like, ‘Follow your bliss, kid,’” she said. “And she’s pleased now!” 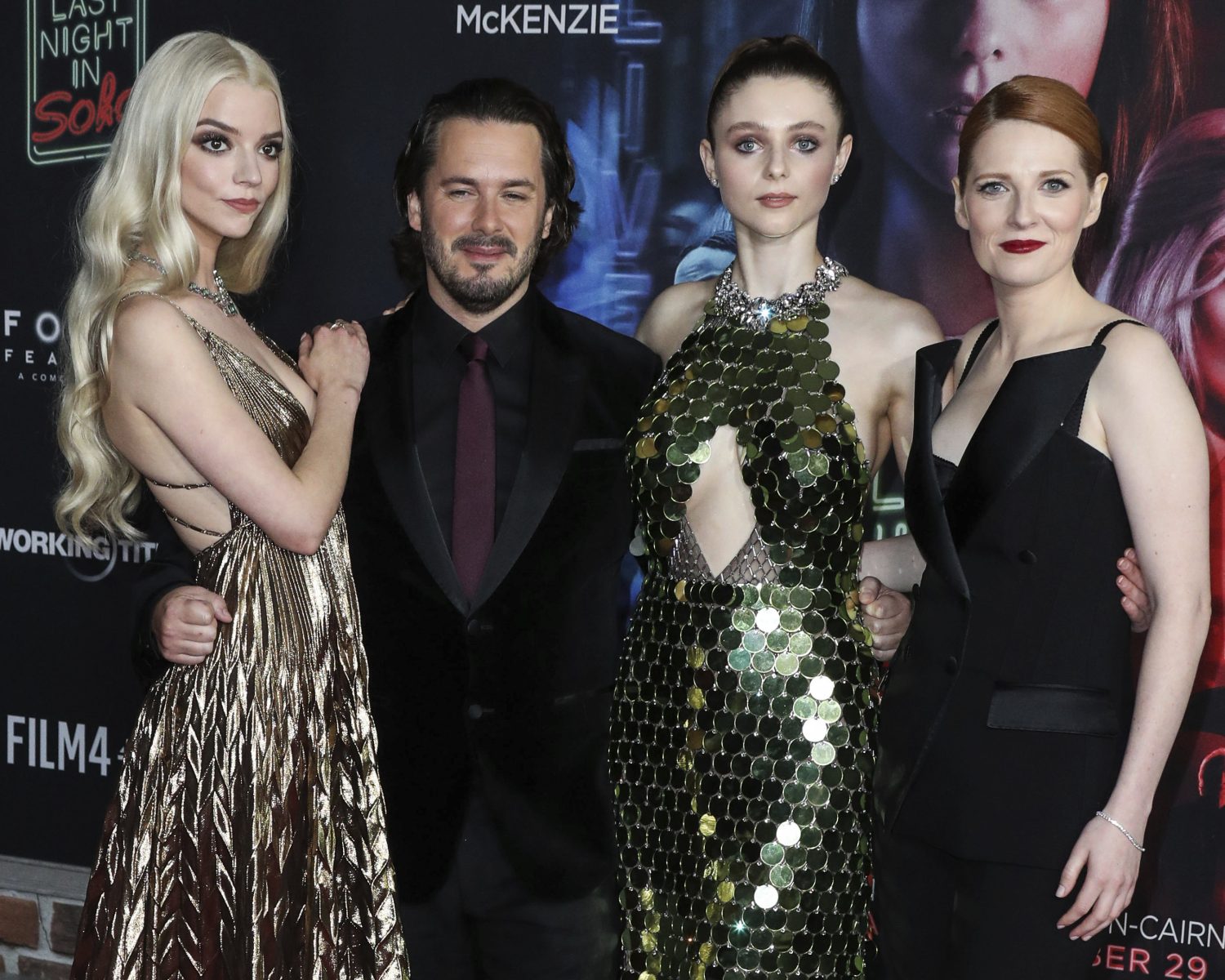 Wilson-Cairns got her wish: She studied at the Royal Conservatoire of Scotland and the National Film and Television School, drew major recognition for her 2014 Black List script “Aether,” and landed a staff job on the show “Penny Dreadful.” In 2019, after a number of starts and stops alongside filmmaker Sam Mendes, Wilson-Cairns earned her first feature credit by co-writing the complex war drama “1917” with Sam Mendes. It was Mendes who introduced to Wilson-Cairns to Wright. The pair met for a friendly drink — in Soho, across the street from the strip club Wilson-Cairns used to live above and the bar she used to work at during her time at NFTS, which is now immortalized in the film. He asked her to take her around. “He’s like, ‘Can you take me on this tour of the other side of Soho, not the Groucho Club and not Soho House, but the dingy part?,’” Wilson-Cairns said. “I was like, ‘Yeah, of course I can. That’s where I hang out.’”

As they made their way around the neighborhood, Wright shared his early ideas for “Last Night in Soho” with Wilson-Cairns. “I loved it,” she said. “I remember gripping onto the tables as he was telling me it. He’s a very good storyteller!” Over a year later, Wright called up Wilson-Cairns with an intriguing prospect: would she write “Last Night in Soho” alongside him? For the screenwriter, it wasn’t just a “yes,” but a “very easy yes.”

A week later, Wright sent Wilson-Cairns a massive package: a research document, a playlist, and a stack of movies “taller than I am,” she said. A week after that, the pair set about writing the script together. The first draft took about six weeks, fueled by scads of candy (lots of Revels) and a ton of music.

“The story just had such a shape to it already. It was very easy to then craft a script,” Wilson-Cairns said. “We’d spend time talking about characters and trying to pull these people out and make them feel relatable. Then you imbue a lot of your own experience into it. We shared a lot of experiences. We were both losers that moved to London to try and make it in film school.”

Wilson-Cairns, who thrives in collaborative environments, loved the experience. Wright, well-known for his unique cinematic tastes and obsessions, is a wonderful partner, not at all precious or overbearing. “We’d both be on our laptops. We’d share screens, back and forth,” she said. “There’s stuff on a whiteboard, there was a lot of stuff stuck up on the walls. It looked a little bit like we were going down a conspiracy rabbit hole. Real ‘Seven’ stuff, but that’s our aesthetic, so we just had to accept it.” 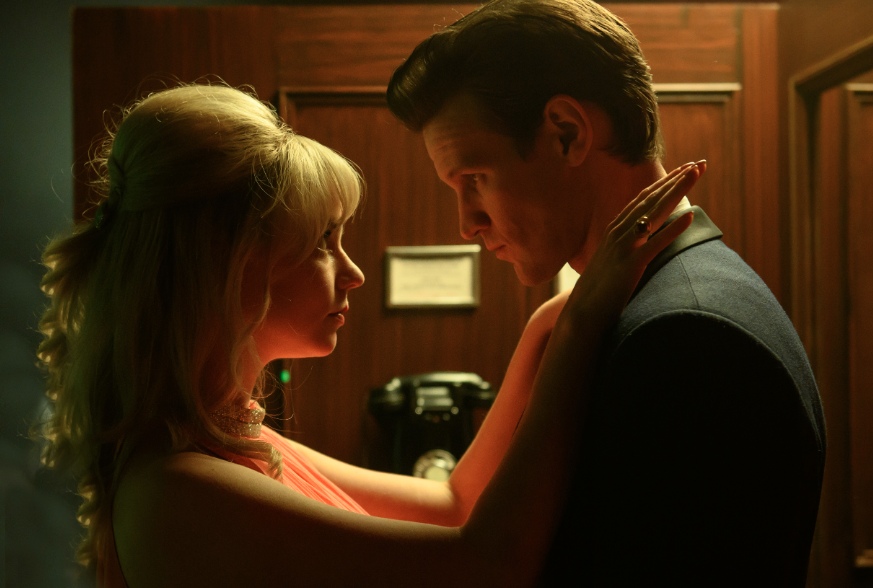 Wilson-Cairns had heard all about the film’s big twist during the pair’s first evening out in Soho, but instead of feeling constrained by Wright’s ambitious idea, she said it actually helped her focus more immediately on what really enthralled her about the story. So much of who Ellie is comes right from Wilson-Cairns, from working at the grimy Toucan bar to having a ’60s-obsessed mum. And, just like Wilson-Cairns, Ellie learns some tough lessons about the things she loves.

“My mom was born in 1961, so she was a bit obsessed with the ’60s, because it was the decade of her very early childhood, and so she loved the music and the fashion and everything like that, and that was what I had naturally understood,” Wilson-Cairns said. “Twiggy and Princess Margaret hanging out with the Rolling Stones in Soho! Carnaby Street! Also, it was obviously a massive decade for change for women, birth control, the miniskirt, all this stuff. I thought, ‘Oh wow, okay, it’s a very enlightened decade.’ And then I started reading the research.”

Wilson-Cairns was surprised to find jarring details from the era, like that women couldn’t have credit cards or their own property. “I feel nostalgia all the time, and I actually think it’s a really dangerous thing,” she said. “We’re always told about the good old days, and then when you actually investigate, when you use your brain and you look at the ‘good old days,’ you’re like, ‘Wow, okay, we had problems.’” 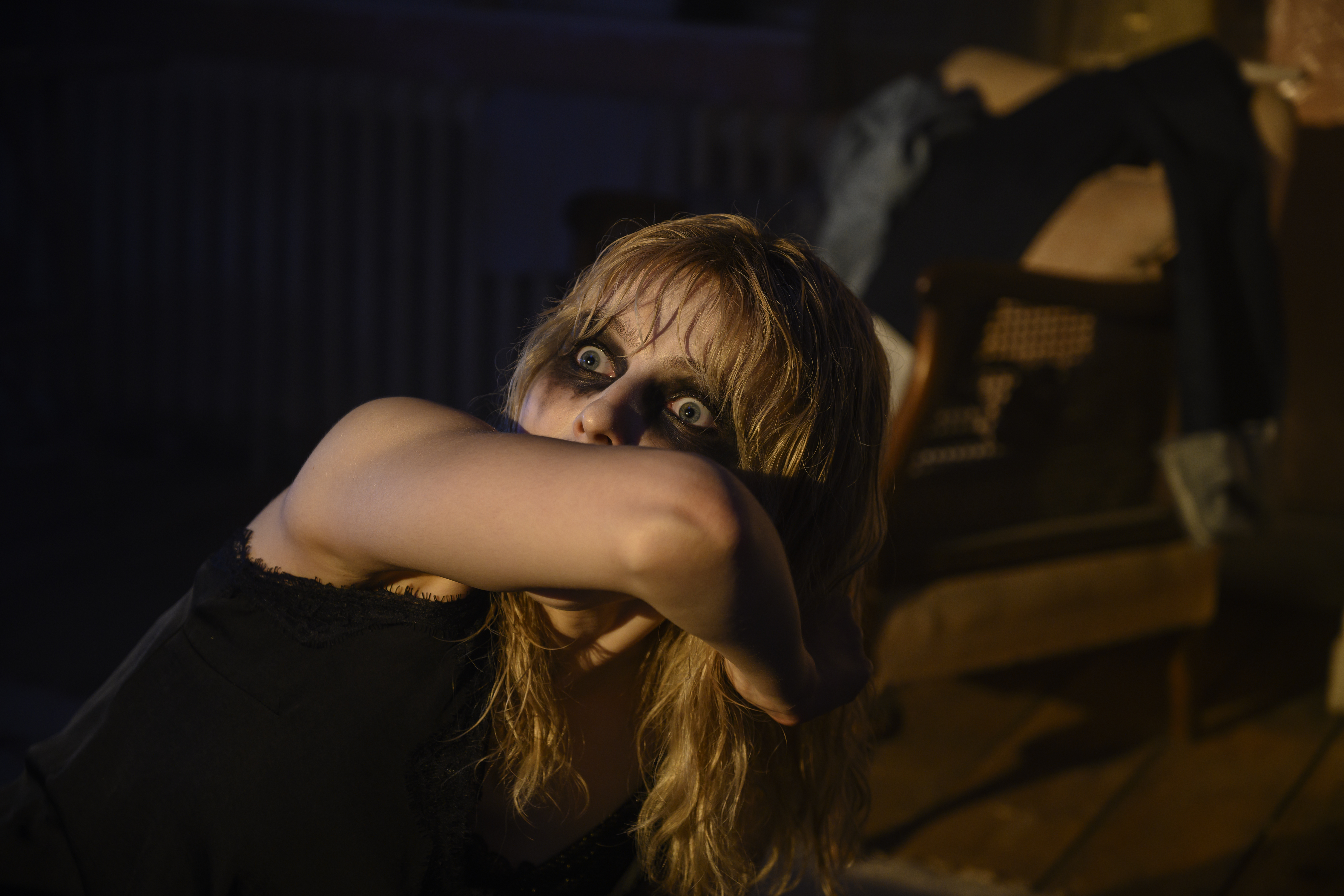 That bent toward interrogating nostalgia allows the film to span a number of genres and tones. Distributor Focus Features has never shied away from its designation as a “psychological thriller,” but for Wilson-Cairns, it’s so much more.

“I would say the first act is a coming of age film. The second act is psychological, a thriller. And the third act’s a horror,” she said. “It’s very handy to have these classifications. Otherwise, how would we know what to search for in Netflix? But I don’t think everything needs to be just one thing. I think they can all exist and mingle. You can start being like, ‘Oh, this is a lovely rom-com. Oh my God, it’s a zombie thriller!’ I love a good twist.”

Even with all those tones and twists at play, Wilson-Cairns still sees one overarching theme, a guide post that should help anyone wary of the twist find a nifty way to engage with it.

“The whole film is essentially a warning to would-be time travelers,” she said. “The whole idea is you give people in the first act what you think they want, or what they think they want, which is a lovely dream, fairy tale, this wonderful story. Then you let reality creep in, then you let horror creep in on top of that, and you push, and push, and push until you’re stuck there for the ride, just like Ellie.”

A Focus Features release, “Last Night in Soho” is now in theaters.