Pamela Anderson, uh, I mean Lily James was recently photographed on the set of the upcoming Hulu limited series, Pam & Tommy. The series will focus on Pamela and Tommy Lee’s sex tape. You know, the first celeb sex tape ever (…at least the first that was leaked, lolz). We already saw pics of Lily and Sebastian Stan, who’s playing Tommy Lee, in character. They look just like the exes—it’s kinda creepy, tbh.

The new photos show Lily in a fire engine red one-piece swimsuit, reminiscent of the suit Pamela wore while filming her TV show, Baywatch. The drama series ran from 1989 to 2001 and followed lifeguards who worked at a Los Angeles beach. They saved lives, got into trouble, oh, and fought crime… don’t ask. The point is that Pamela played a lifeguard (duh) named C. J. Parker, who pretty much always wore the same swimsuit.

According to Variety, the series focuses on the true story behind the viral sex tape. Sebastian and Lily star alongside Seth Rogen, Nick Offerman, Taylor Schilling, Andrew Dice Clay, Pepi Sonuga, Spencer Granese, and Mozhan Marnò. Seth plays Rand Gauthier, aka the guy who stole and sold the tape.

Hulu already released a photo of Lily and Sebastian, which left fans’ jaws on the ground. The casting department deserves all the Emmys because the actors look *just* like the infamous pair. 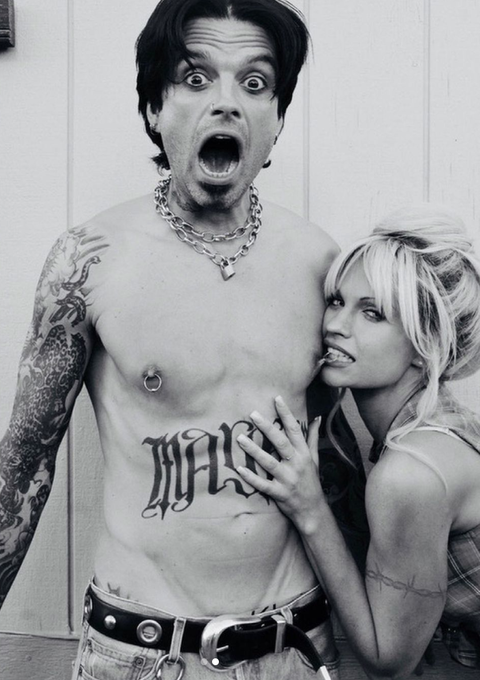 When it comes to the actual tape, Pamela said it wasn’t “a sex tape,” but “a compilation of vacations that we were naked on” on Watch What Happens Live in 2015.

Want more deets on your favorite shows? Yeah. We know you do. You can find all of our TV here.