Fans who are still mourning Tokyo’s heartbreaking death on Netflix’s hit caper Money Heist should take comfort: Ursula Corbero, who brought the character to life for five seasons, said she grieved the loss for the better part of a month.

“I cried nonstop for three, almost four weeks,” Corbero told fans and journalists at a recent press event in Madrid celebrating the final episodes of Money Heist, aka La Casa de Papel. “I experienced so many emotions: nostalgia, sadness, anger. When we shot in Lisbon, I felt melancholy because we were finally telling Tokyo’s backstory. But Tokyo also taught me how to live more fully because she risked her life to feel alive.”

The fifth and final season comes to an end this Friday with five farewell episodes that have many cast members feeling both a sense of loss and gratitude, they said. Meanwhile, Miguel Herran, who costars as Tokyo’s former love interest Rio, said it took a while for him to move past the loss of Tokyo and no longer working with Corbero, who became one of his closest friends. 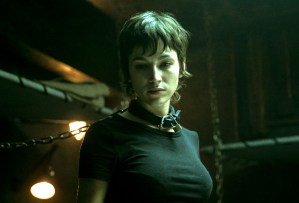 “On the day we shot the scene where Tokyo dies, I felt so messed up,” Herran confessed. “I couldn’t look anyone in the eye, or I would start crying. I had to look at the floor. I kept the script. The whole experience is a part of me now. Ursula is in my heart.”

But death is an unavoidable part of life, and Money Heist will continue to treat it as such in the episode where Rio says goodbye to the love of his life. Fans will get to keep Tokyo close because she will continue on as the intensely satisfying series’ narrator. And Rio will keep her in his heart through touching flashbacks and memories.

In one sneak-peek clip shown to fans and critics, Tokyo can be heard saying goodbye to Rio in her own way, just before Lisbon hugs and consoles a heartbroken Rio through his tears.

“It’s a wonderful love story,” Herran added. “Rio has to keep living for Tokyo. We all do.”

Are you excited about the final five episodes of Money Heist or sad to see it go? Drop your thoughts in the comments.