If telepathy via The Force exists among “Star Wars” devotees, then around 1 a.m. ET on Friday, they likely shared the same simultaneous thought: “It’s a trap!” (Or, perhaps, they merely sent around the popular .gif.) At the end of the “Obi-Wan Kenobi” premiere, the eponymous Jedi himself walks into an ambush — an ambush obvious to everyone watching long before the episode confirms as much. After a decade in hiding, Ben Kenobi (Ewan McGregor) makes the difficult and dangerous decision to leave Tatooine. Luke Skywalker, who he’s sworn to protect, is safe. Leia (Vivien Lyra Blair), however, has been kidnapped. What’s a trusty ol’ Jedi to do?

Simple: He’s going to help. As outlined throughout the facile yet efficient “Part 1,” Jedis are duty-bound to do what’s right. Rupert Friend’s Grand Inquisitor illustrates as much in his opening monologue. “Jedi cannot help what they are,” he tells a frightened bartender. “Their compassion leaves a trail.” Even if it means risking their lives, Jedis will, say, stop a thrown dagger in mid-air before it connects with its innocent target. They’ll spend their days carving hunks of meat while Jawas steal their shit, only to sell it back to them without so much as a quick polish, all to keep an extra eye on a gifted child. And yes, they’ll walk into a trap if it’s the only way to ensure another promising kiddo escapes unharmed.

Such straightforward heroism hits home in “Obi-Wan Kenobi’s” first two hours. While baring some of the hallmarks seen in recent Disney+ series — below-standard spectacle, padded plotting, preordained emotional beats — director Deborah Chow (“The Mandalorian,” “Better Call Saul,” “Mr. Robot”) builds an elegant, streamlined aesthetic that balances the colorful palette of the prequel trilogy and the starker settings of the original set. Considering “Obi-Wan Kenobi” serves as a de-facto bridge between the two — explaining how Ben spent his time after defeating Anakin Skywalker (Hayden Christensen) but before his son, Luke, comes into his own — the look fits, as does our protagonist’s central dilemma: Can trying to save one life jeopardize another? Can good be manipulated into evil? Is the risk always worth it, or should exceptions be made?

Such dilemmas are familiar to “Star Wars,” but that doesn’t make them any less engaging. Under McGregor’s welcoming wing, “Obi-Wan Kenobi” uses nostalgia like a weighted blanket: surrounding you with characters you already love, warming you with an uncomplicated quest, and inviting you to lay still, sans complaints, in order to appreciate what little time you have left with Obi-Wan — the Jedi so good they built a prequel trilogy just to spend more time with him, and now a miniseries to boot.

“Part 1” of the six-episode series functions nicely as a reintroduction to the main “Star Wars” timeline and an introduction to this story. There’s Joel Edgerton again, reprising his role as Owen Lars, Luke’s uncle and an aptly surly moisture-farmer on the desert planet of Tatooine. He’s soon threatened by Reva, aka Third Sister (Moses Ingram), an Inquisitor with peculiar movements and particular impatience toward killing Jedis, especially Obi-Wan. Her appetizer turns out to be Nari, a Jedi in hiding played by none other than Benny Safdie (of “Licorice Pizza” fame in front of the camera, “Uncut Gems” fame behind it, and “Good Time” fame for both).

Friend’s villain — who should forever be nicknamed White Snake, for his pale, reptilian skin and smooth hiss of an accent — is, sadly, not long for this world, as his ambitious third-in-command Reva kills him, rather than share in the glory of Obi-Wan’s capture. Worse still, both episodes of “Obi-Wan” lack the razzle-dazzle seen in most “Star Wars” movies (and even “The Mandalorian”). The Grand Inquisitor’s death is one in a handful of scenes that come across as lazy. Rather than go for the quick kill, why not let the two lightsaber-wielding baddies fight to the death? Glowing swords clashing against each other is always cool, and Reva needs to put in more work before she’s taken as a serious threat. (As much as I love Kumail Nanjiani, it makes little sense that a disciple of Darth Vader would let his fake-Jedi live after helping Obi-Wan escape.)

Not for nothing, a closing battle may have helped erase memories of the worst running ever captured onscreen. Little Leia’s chase scene is miserably executed: Flea’s bounty hunter actually slows to a stop when she first takes off, his green assistant can be seen rocking from foot to foot like he’s playing hopscotch, and thigh-level branches haven’t been this much of a hindrance for full-grown adults since the last time I went camping and couldn’t build a fire. Tack on Reva’s less-than-speedy pursuit of Obi-Wan’s departing ship, and you better believe Tom Cruise would be ashamed of these people. 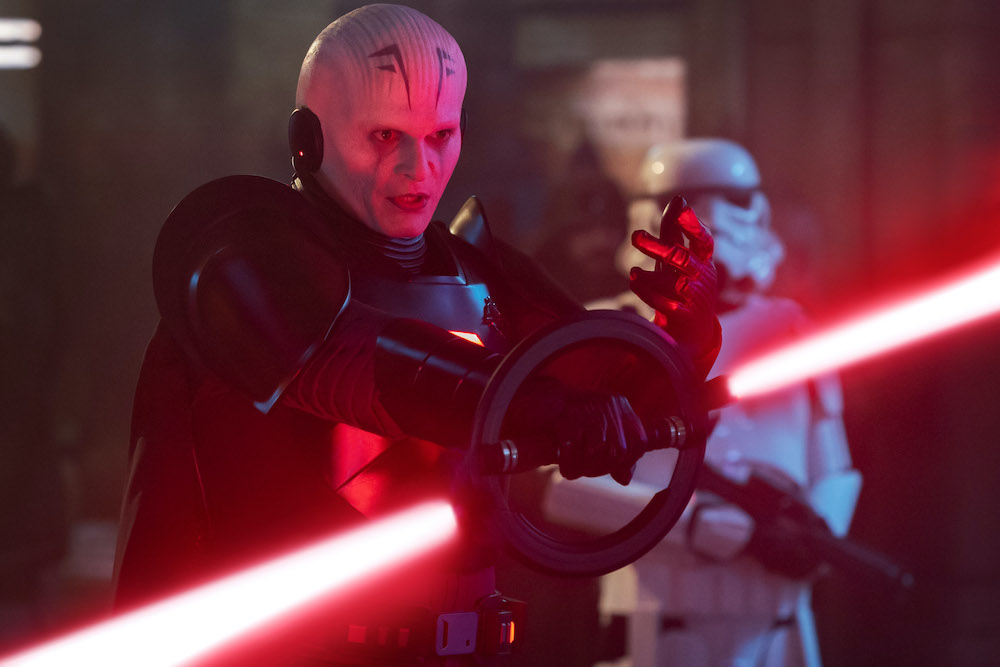 Thankfully, even the high-flying Maverick would have a hard time resisting McGregor’s easy charms. Calm yet caring, careful yet capable of kicking ass, McGregor’s Obi-Wan has always felt at one with the character first brought to beautiful life by the great Alec Guinness. His obvious investment in Ben Kenobi bolsters his every scene, and bids the audience to look deeper. Some may take heed by appreciating Obi-Wan as much as the actor does. Others may go further and actually apply his plight to our own world.

“Obi-Wan Kenobi” opens with storm troopers attacking a group of Jedis and their pupils. Their teacher is killed. The kids run for their lives. To see this as a school shooting, especially this week, isn’t a stretch, and those that make the connection may doubly invest in Ben’s journey. He’s a teacher and a guardian. He failed once before with Anakin, and their inevitable second duel will certainly speak to how he resolves that lesson before looking after Luke — before he moves forward as a helpless servant of good.

“Star Wars” has always been a big story broad enough to encompass various readings, just as its setting in a galaxy far, far away has been separate enough to be taken in solely as entertainment. “Obi-Wan Kenobi” isn’t going to provide answers to our pressing real-world problems. But it may provide solace, with an added dose of hope. Maybe, given past Disney+ tentpoles, we’re walking into a trap. But for now, McGregor’s earnestness is reason enough to linger a little longer here, somewhere between the past and the future.

“Obi-Wan Kenobi” premiered two episodes Friday, May 27 on Disney+. New episodes will be released weekly. The finale is scheduled for Friday, June 22.