Oscar Isaac has given us a little teaser for Star Wars: Episode IX, because he’s kind of amazing like that.

The Poe Dameron actor is currently filming the final instalment in the latest Star Wars trilogy, and admitted that the Resistance are reduced to “guerrilla” fighters in the movie.

If you remember, at the end of The Last Jedi, the Resistance were down to one ship as they were pummelled by the First Order, though the movie was left on a note of hope.

Speaking to USA Today, Isaac revealed that the Resistance are now “guerrilla fighters, adhering closer to something like the Revolutionary War fighters or even the guerrillas in Cuba with Che [Guevara] and Fidel [Castro] and all these guys living in the mountains, coming down to do some attacks, and going back and trying to hide from the ’empire’ of the United States”.

“It’s that kind of ragged at this point,” he added. “You hear about stories with [George] Washington as a general, where lots of people died based on their orders, but that is part of leadership and that push-and-pull in the fight for figuring out what’s the way to move forward.”

A few days ago, we got our first glimpse of the as-yet-untitled Episode IX with on-set photos of Isaac and co-star John Boyega in action. 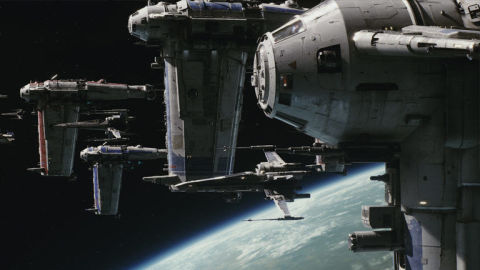 In other Star Wars news, it emerged earlier this week that none other than Doctor Who‘s Matt Smith is joining Episode IX in an undisclosed role.