Netflix series Ozark is on the homerun now after the American streaming platform announced the show was coming to an end. Season four is going to be the last one for the Emmy-winning crime drama. Speculation is rife about how it will all be going down and who is going to be killed off.

Will Darlene Snell be killed off in Ozark season 4?

Following the news season four would be the last, Marty Byrde star Jason Bateman said: “A super-sized season means super-sized problems for the Byrdes. I’m excited to end with a bang(s).”

“It’s been such a great adventure for all of us — both on screen and off — so we’re thrilled to get the chance to bring it home in the most fulfilling way possible.”

Season four will be comprised of 14 episodes, divided in two which means the drama will be amped up further. 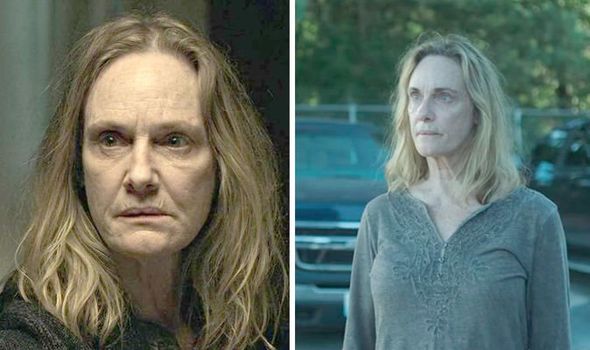 Fans can expect a mid-season finale ahead of the series finale with both expected to be explosive points in the story.

Given the world of Ozark is filled with danger, it seems logical many characters are going to be killed off in the final outing as the show bows out.

One of the people most likely to be killed is Darlene Snell (played by Lisa Emery), who has been at odds with Marty and Wendy Byrde (Laura Linney).

Season three saw tensions flare between the two women as they fought over Baby Zeke.

Wendy is still determined to get Baby Zeke back, but it looks like it could come at a high cost with the former political lobbyist killing Darlene.

While the Navarro Cartel is unlikely to bat an eyelid if Darlene gets killed off, her death could have major repercussions.

Additionally, Frank Cosgrove (John Bedford Lloyd) could eventually betray Darlene after she shot his son Frank Jr. (Joseph Sikora) and may just be biding his time.

Darlene has plenty of enemies and even Jonah Byrde (Skylar Gaertner) could try to kill her off after she kidnapped him in season two.

However, there’s also a good chance Darlene could make it to the end of Ozark alive, particularly now she has cousins Ruth (Julia Garner) and Wyatt Langmore (Charlie Tahan) on her side.

Fans have already been speculating how Darlene has managed to survive so long in the show without getting bumped off, particularly after she murdered her husband Jacob Snell (Peter Mullan) in season two.

One Redditor called mmherzog asked: “Everyone knows she’s not only a loose cannon but literally a raging psycho lunatic. How many problems would have been saved if they just offed her?”

Another person responded, saying: “From what I can gather, they can’t kill Darlene because the casino is on Snell land.

“However, since she’s selling through the KC Mob now, I don’t see why the Cartel wouldn’t have a problem with it.”

User SomeNoteToMyself explained: “The main reason is that Darlene very powerful connections with people. We saw some of her army in season 2, but they didn’t end up attacking anyone.

“I am pretty sure that in a future season, we will get to see Darlene’s forces attack an enemy in full force.”

While Redditor YogoWafelPL said: “She’s one of the most influential people in the Ozarks, you don’t just make a move on someone like that.”

Another person Lukendless echoed these sentiments, saying: “She has an army of people she feeds/clothes/houses/drugs. They are all tied to her, her land, and her opiates.

“The cartel would need to launch a full on war on American soil to touch her. No one else in the area stands a chance. Covert assassination? Maybe.

“But we’re completely in the dark about what kind of immediate security she has.”

All of this suggests, the Byrdes would have too much to lose if they tried to kill Darlene and she could be the last woman standing.

Ozark seasons 1 to 3 are streaming on Netflix now