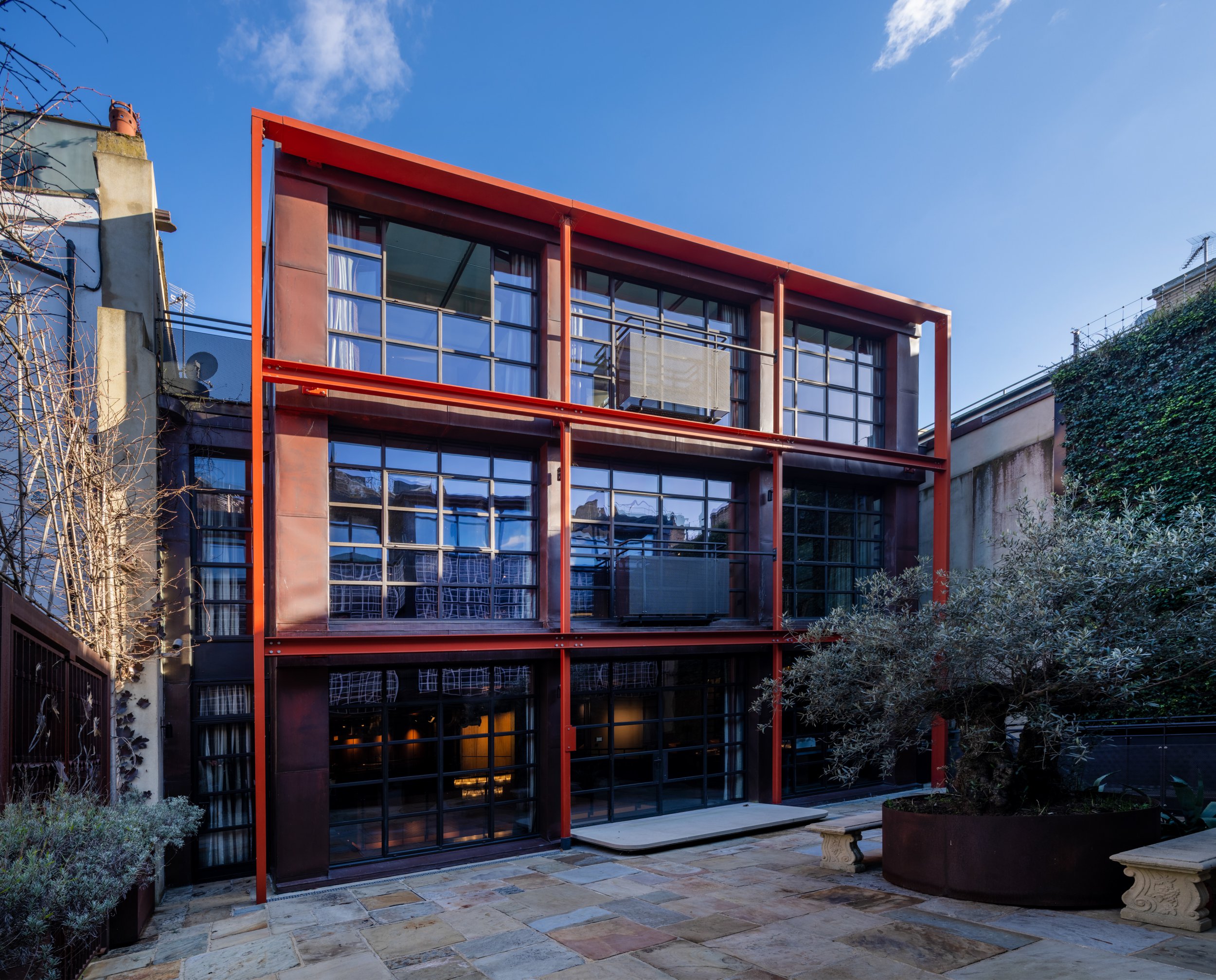 It’s pretty glorious in and of itself, but it also has some star power: the home was previously rented by Tim Burton, and still has the creative workspace where he produced the 2019 Dumbo film.

The film director rented the property for years from 2016, using it as his London base for work and relaxation.

Now, years later, it’s up for sale, at the staggering price of £20million.

Yes, that is quite steep – but wait ’til you see all that’s inside.

Even from the outside, the house is mighty impressive.

Designed in collaboration with architectural practice Chassay Last Architects and Russel Sage Studio, the property is made up of two interlinked buildings that sit opposite each other across a private garden courtyard.

These two buildings are then joined at lower ground floor level, and both have cold-pressed bronze windows and glass brick facades inspired by Pierre Chareau’s Maidon de Verre in Paris.

They sit in gated mews in the heart of London’s super fancy area, Primrose Hill.

Inside, the home is all open-plan interiors, high ceilings, and huge windows to let you look out over the garden.

In the east wing, there’s a double-height grand salon making up the lower and ground level floors, with an upper level containing the kitchen, breakfast room, and dining room.

On the lower level you can access the leisure suite, which has a swimming pool that doubles as a home cinema, with a mechanical floor and waterproof screen.

Also on this floor is a leisure room and gym. And a cocktail bar, of course.

Head up a level and you’ll find the principal bedroom suite, which is as grand as you’d imagine, while the second floor has an orangery, which you could convert into a massive home office space, if you fancied.

Head over to the west wing and there’s the double-height living room and kitchen on the ground floor, then a study, three bedrooms, a walk-in dressing room, and a bathroom on the upper floors.

If you’re thinking something along the lines of ‘that’s a lot of floors’, worry not, as there’s an elevator to take you all over the house. You can also take the staircases, if you prefer.

When Tim Burton lived at Eglon house, he separated the wings into work and rest; with the east wing used as a place to write and produce Dumbo, and the west wing serving as accommodation for executives and staff working on the film.

Long before that, the site used to be home to stables and barns, which were used in World War One to make shell casings.

Then, up until the 1950s, the space was used to produce milk from cows.

In the 1970s it was converted into Mayfair Recording Studios, where stars including David Bowie and Pink Floyd recorded.

Finally, after six years of design and construction, the space became the Eglon House that still sits there to this day.

Its incredible craftsmanship is evident in every detail, from the grand staircase made with pitch-pine and grout mixed with Portland stone, to the incredible custom kitchen.

Howard Kayman, associate director at Aston Chase, who are selling the home, said: ‘There is a prescience in the design of Eglon House in how it meets the demands of the world we now find ourselves in.

‘It combines large lateral studio spaces with intimate residential parts and successfully blurs the boundary between the two.

‘Director Tim Burton lived and worked in the space for several years, basing his creative studio there for the production of his Dumbo remake.

‘A space like this is a rarity in Prime Central London.’

Mark Pollack, co-founding director at Aston Chase, added: ‘Elgon House is a unique home without a parallel in London.

‘Secreted away at the foot of a peaceful mews, located in the very heart of Primrose Hill, the property is ideal for the growing number of super-prime buyers who favour maintaining a low profile in preference to the visibility afforded by some of London’s more obvious destinations for substantial homes.’

If you can’t front the cash for the £20million asking price, not to worry.

The home is also available to rent for the bargain price of £15,000 a week.