Racist? Australia? You've got to be kidding.

On Monday night, the ABC's Q&A went every which way, including the most obvious, which was to wonder how on earth we ended up here.

On this special author edition, brought to us from the Melbourne Writers Festival, there came one particularly awkward moment that brought together a contentious voice, a TV host and the question of just when and how the latter should challenge the former on national television. 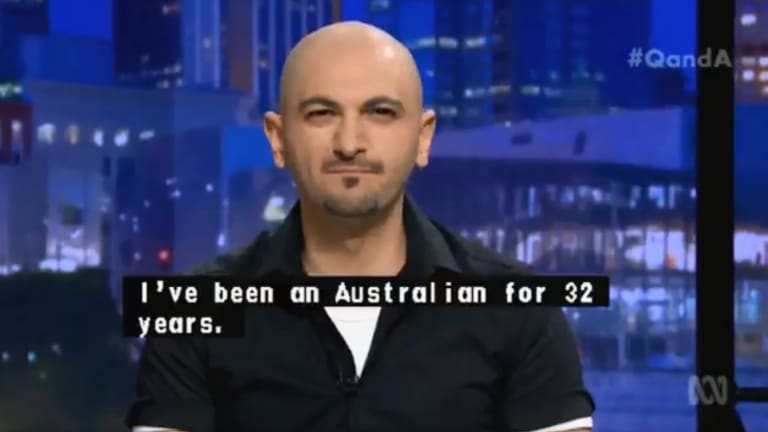 The contentious voice was Michael Mohammed Ahmad, author of the novel The Lebs, who had many worthwhile points to make and who seemed, by the consistent volume at which he yelled at the camera, to be unaware he was wearing a microphone.

But he made many a valid point, including regarding anti-Muslim bigotry: "I'm 32 years old and I've been an Australian for 32 years.

"And this kind of hysteria, the language to reinstate a white Australia policy, ban immigration from the Muslim world, ban people of colour, has a cyclical model. We hear it every couple of months… It makes no difference what kind of a Muslim you are. Good Muslim, bad Muslim, ignorant Muslim, moderate, radical, still Muslim. At this point in time, I'm not interested in reassuring bigots not to be afraid of me. My position is quite the opposite.

"My position is this. If you're a racist, if you're a white supremacist, a colonialist, Islamaphobe and a xenophobe, you should be afraid of me, because I, in solidarity with the majority of people on this planet who will say no to you and we will stop the bigotry and hatred that you're spreading." 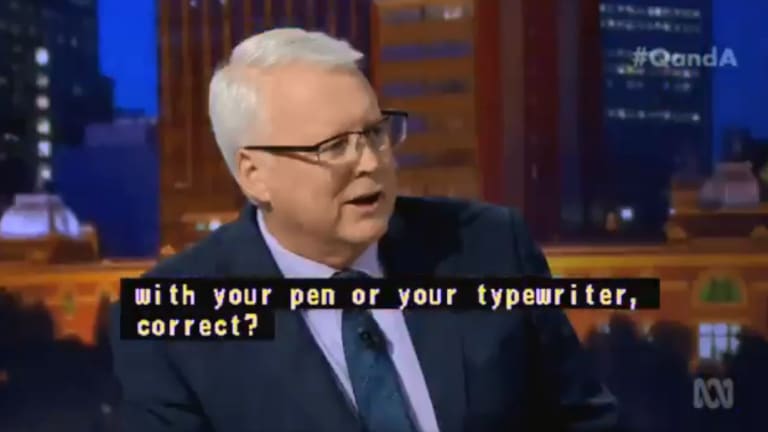 Host Tony Jones – awkwardly would be an understatement – inquired of the nature of the rebellion: "In your case, you're talking about with your pen or your typewriter, correct?"

Ahmad: "Because you're worried that I'm implicating some kind of violent actions?"

Jones: "I'm giving you the opportunity to say that you aren't?"

Tony, what we're you thinking?

Ahmad: "Of course I'm not. I just find it really cheap when there's a concern that Muslims are inciting violence because if you looked at the foreign policies of the West they are the most violent people on the planet."

As this exchange suggests, it was a bracing hour of television – devoid of politicians with a panel of writers, and an audience of questioners who turned it into one of the most thought-provoking episodes of the year.

Finding itself awkwardly thrust into the latest round of Australia's political leadership roundabout, Q&A did a decent job of throwing the federal political chaos into what was originally intended to be a literary debate.

The questions came thick and fast.

There was this: "The tenure of Prime Minister Turnbull is once again the subject of intense speculation. If Peter Dutton were to become Prime Minister, do you believe that his actions and statements regarding African gangs and refugees would harm or help the Coalition at the next election?"

And this: "A week ago on Sky News, United Patriot Front's Blair Cottrell, a man who has admitted to liking Hitler and been found guilty of violence against women, made comments about restoring Australia's traditional identity and the need to protect the people of this country against foreign ideologies. And last week Senator Anning claimed that the final solution to the immigration problem should be a Muslim ban.

"Do you think that the media should censor this type of behaviour or is that crossing the line on freedom of speech? Is dog-whistle politics becoming a more or less successful tactic in Australian politics?"

Panellist Maxine Beneba Clarke declared: "The idea of a Dutton PM just fills me with terror. I think that I'm still an idealist and I think a lot of writers are idealists. Our job is to reimagine the world or imagine a different world."

And then there were the invocations of Donald Trump.

"They have great difficulty understanding the other person's point of view because it's almost like a different language. It's the constant tension between these two different types of thinking."

Fellow panellist, author Sofie Laguna: "I can't get my head around Dutton at the moment as PM. Can't happen. But I said the same thing about Trump."

In short, looking at the political world around us, words mostly failed them, but it was extremely entertaining.